PHOENIX – Jovanna Calzadillas is heading home from a Phoenix hospital, three months after she was shot in the head after a mass shooting at a Las Vegas music festival. She was not expected to live but doctors – and her family – refused to give up.

“I feel strong and positive,” the Queen Creek mother of two said Wednesday, speaking to reporters about her recovery.

“A part of me changed that night. Even though I will not be the same old Jovanna, I will come back stronger.”

She was at an Oct. 1 outdoor concert with her husband and high-school sweetheart, Frank, when a gunman opened fire from a nearby hotel, killing 58 and injuring 546 in the nation’s deadliest mass shooting in modern history.

Calzadillas, who was shot in the head, was rushed to a Las Vegas hospital in critical condition. At one point, Frank Calzadillas said, doctors there asked whether he wanted to take her off life support. He refused.

“The hardest part for us was not knowing,” Frank said. “However long it takes. That was our promise to her, and her promise to us was she wasn’t going to give up.” 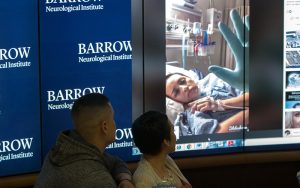 Jovanna Calzadillas, sitting beside her husband, Frank, during a press briefing at Barrow Neurological Institute, watches a video of herself taken days after the shooting at the Las Vegas Route 91 Music Festival. (Photo by Melina Zuniga/Cronkite News)

Three weeks after the shooting, she was transferred to Barrow Neurological Institute in Phoenix. In November, she grabbed her husband’s hands and asked for ice cream. She has been working to recover in a rehab center for about six weeks.

Christina Kwasnica, the medical director of Barrow’s Neuro-Rehabilitation Center, said Calzadillas has been focusing on physical, occupational and speech therapy for three hours a day.

Frank Calzadillas said his family’s focus has been on getting his wife healthy so she can “continue to blossom.”

Jovanna Calzadillas is expected to be discharged from Barrow on Thursday and head home to the East Valley.