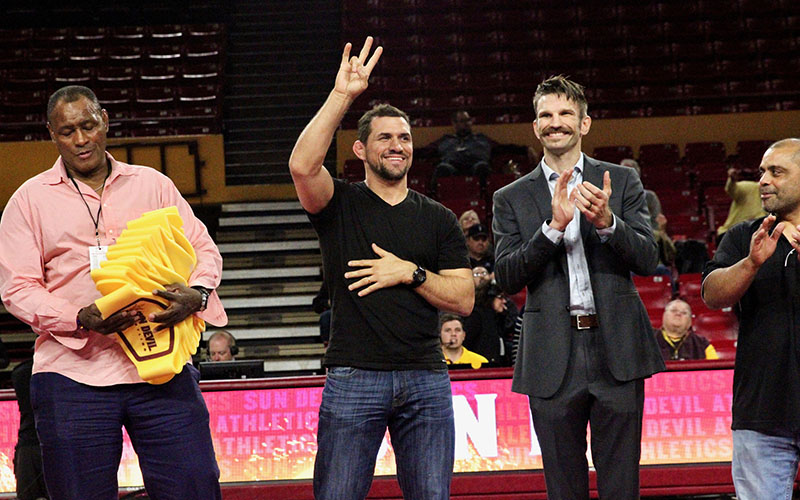 TEMPE – Arizona State wrestling has emerged as one of the leaders in the college landscape when it comes to producing mixed martial arts talent. It has delivered UFC veterans and contenders John Moraga and Aaron Simpson. Current and former champions Ryan Bader and Cain Velasquez spent years on the mats in Tempe.

“We have a special state for MMA, and I think Arizona fans recognize that,” Simpson said. “Arizona is still a hotbed for mixed martial arts.”

On Friday, the No. 8 ASU wrestling team honored several current and former stars for its third-annual MMA Night at Wells Fargo Arena, where the Sun Devils opened their Pac-12 schedule with a 24-15 victory over a team that defeated them less than a year ago.

Head coach Zeke Jones said he doesn’t shy away from talking to recruits about mixed martial arts. It’s a strength of the program, he said, and something many other colleges don’t do.

“When we talk to recruits, we tell them they have two paths: You can go down the path to an Olympic gold medal or, if you have the ability to fight, you can be an MMA star. You can become a UFC or Bellator champion,” Jones said.

Mixed martial arts has come into its own as a profitable sport. Those who reach the top of the ladder can earn millions per fight. Former heavyweight champion Brock Lesnar secured north of $2 million for his win against Mark Hunt at UFC 200. Former bantamweight champion Ronda Rousey earned $3 million in her loss to Amanda Nunes at UFC 207.

Conor McGregor, one of the biggest names in the UFC and in combat sports as a whole, has used his personality and skill in the cage to cash paychecks of $590,000, $1 million, $3 million and $3.5 million in the past three years.

Even fighters who don’t reach the top can reap rewards from their hard work. Former lightweight champ and current welterweight contender Rafael Dos Anjos has made six figures in eight of his past nine fights. Bader, who never fought for a UFC title, consistently scored six-figure paydays before he departed to Bellator.

Both Arizona State and Arizona have been home to a culture that breeds fighters and fierce competitors. A bevy of boxing, jiu-jitsu and Muay Thai gyms across the Valley give martial artists in Arizona plenty of places to hone their crafts in the hope of competing under bright lights in the UFC Octagon or Bellator cage.

Mixed martial arts and wrestling have gone hand-in-hand since the Ultimate Fighting Championship debuted back in 1993. Wrestling and brazilian jiu-jitsu were how smaller men took down and defeated much larger opponents. Royce Gracie and Ken Shamrock were prime examples that technique trumped size.

Moraga, a former Sun Devil, noted that his time wrestling at ASU provided him with knowledge of how to be successful in mixed martial arts.

“I learned how to focus and train smart,” Moraga said. “I think wrestlers are great at adapting because they’re always used to being in competition.

Moraga said that he never thought about fighting until he and Velasquez would talk about it while both were with ASU Wrestling. The UFC flyweight is a 24-fight veteran, with 12 fights in the UFC. His most recent fight was a first-round knockout victory against formerly undefeated Magomed Bibulatov.

Some of the biggest legends in MMA have ASU roots. Dan Severn fought in and won some of the earliest UFC tournaments, but before that he was a three-time All-American at ASU. Don Frye showed the world that wrestlers could use their skills to keep the fight standing if they wanted to, and force their opponents to box with them. Dan Henderson won the PRIDE middleweight and welterweight championships, and was the first man to simultaneously hold two belts in a major MMA promotion. Henderson attained his Greco-Roman and freestyle wrestling base at Cal State Fullerton and ASU.

Members of the 1988 ASU wrestling team and mixed martial artists with ties to ASU wrestling pose for a photo at ASU’s recent match with the Stanford Cardinal. (Photo by Weston DeWitt/Cronkite News)

Despite the world-class MMA fighters that have come out of Arizona State, only 10 wrestlers have won an individual championship as a Sun Devil. ASU hasn’t seen a wrestling national championship since 2011, when Anthony Robles and Bubba Jenkins won in the 125- and 157-pound weight classes.

Zahid Valencia, the No. 1 ranked 174-pounder in collegiate wrestling, continued work on his undefeated season and path towards a national championship with his 21st victory against No. 10 ranked Keaton Subjeck. Although it was ‘MMA Night,’ Valencia said he hasn’t given mixed martial arts much thought.

“Right now the main focus is wrestling at the collegiate level and then the Olympics,” he said. “If it were to happen, I think I would be able to transition, but after wrestling.”

Jones, a member of the 1988 ASU wrestling team, the only Arizona State squad to win an NCAA championship, said he almost stepped foot in the cage around the time he won a silver medal at the 1992 Olympics, but it never materialized.

“A wrestling base is the foundation of success in mixed martial arts, and I think any of our guys could do it,” Jones said.

What does it exactly mean, to be an “Arizona fighter,” or “Arizona competitor?”

“Being an Arizona fighter is not just about winning or losing. It’s about testing yourself, and giving back to the community that supports me,” Ritch said.

Ritch fought 143 times in his 19-year career, and he was announced as fighting out of Coolidge before every fight. Over 20 of those fights have taken place right inside his home state.

“Arizona is the mecca of mixed martial arts,” Ritch said. “We have some of the best fans in the entire world.”

That’s strong praise from a man who has fought in Japan, Germany, Canada and Mexico.

The UFC has hosted two events in Phoenix. Neither was a pay-per-view event, and both were available on cable television. Despite the lower profile of both fights, more than 10,000 fans turned out to watch each event. There are no plans to host a UFC event in Arizona in 2018.

One of the biggest moments in MMA history happened in the Grand Canyon State. In December 2010, World Extreme Cagefighting hosted its final event before the promotion was absorbed into the UFC. WEC 53 took place in Glendale and featured a main event between then-WEC lightweight champion, Benson Henderson and Anthony Pettis.

With one minute left in the final round of the last WEC fight to ever take place, Pettis jumped off the cage with his right foot, and used that same foot to deliver a head-kick to Henderson, knocking him down and sealing the fight for the fighter from Wisconsin.

Up until that moment, the entire crowd was rooting for Henderson, a local fighter from Glendale. Once the “Super Kick” landed, the entire crowd shifted and roared as they stood on their feet, recognizing the significance and weight of such a moment.

Arizona crowds have a tendency to back their own fighters, but won’t hesitate to cheer for everyone involved in a spectacular fight.

Friday night’s victory over Stanford was the eighth straight for Jones’ squad. Five out of the six ranked wrestlers on the Sun Devils won their matches. The lone loss came when No. 4 ranked heavyweight Tanner Hall dropped a decision to the No. 7 ranked Nathan Butler. ASU won its ninth straight against against Oregon State Saturday.

Against Stanford, the Sun Devils won six out of the 10 matches. Valencia and the 13th-best 133-pounder, Ali Naser, won their bouts by technical fall. Once a wrestler is up by 15 points or more against his opponent, the match is stopped. It’s college wrestling’s “mercy rule.”

“Tonight’s win was about improvement and getting better,” Jones said. “We haven’t beat Stanford since I’ve been here, so it’s nice to be on this side of a win against them.”

The program is also happy to be on the side of producing mixed martial arts talent, too.