PHOENIX – In the Tuesday morning darkness, Elizabeth Dacosta searched the sidewalks of downtown Phoenix, her coat closed against the 40-degree chill. Dacosta grasped her clipboard and stopped to talk with people who appeared to be homeless and living on the streets.

She was among the scores of volunteers and government employees who sprawled across Maricopa County as part of the annual Point-in-Time survey to capture a blunt snapshot of people who spend their days and nights without shelter.

Dacosta, who remembers what it’s like to be homeless, was among those who started at the cusp of dawn to count and converse with each homeless person they found.

The specific number won’t be available until May, as the data collected Tuesday is compiled and analyzed. But previous counts show the number of homeless who are not living in shelters has increased in recent years. The Maricopa Association of Governments, which oversees the count in conjunction with the behavioral-health organization Community Bridges, said the report is to help determine future funding and other resources. 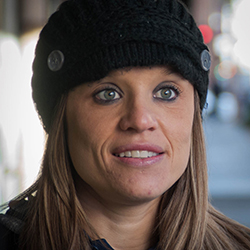 Elizabeth Dacosta of Community Bridges was a member of a team surveying downtown Phoenix for the annual Point-in-Time count of people who are homeless. She once was homeless herself. (Photo by Jesse Stawnyczy/Cronkite News)

In a series of survey questions, volunteers asked where the homeless person had slept the night before, whether they had any medical conditions, if they were a veteran and what support they needed. The survey answers will be aggregated into data that will show the number of homeless people in the county, as well as trends.

Dacosta, Vicki Helland and Anne Scott, a human services planner with the Maricopa Association of Governments, were among the counters who walked and talked to people in downtown Phoenix.

Dacosta, director of housing and community integration for Community Bridges, said the mission is personal. She has a job. She has a house. But that wasn’t always the case.

She described a previous life as a heroin addict who experienced homelessness off and on through her addiction. She decided to change, she said, when she found out she was pregnant.

Her daughter is now 9.