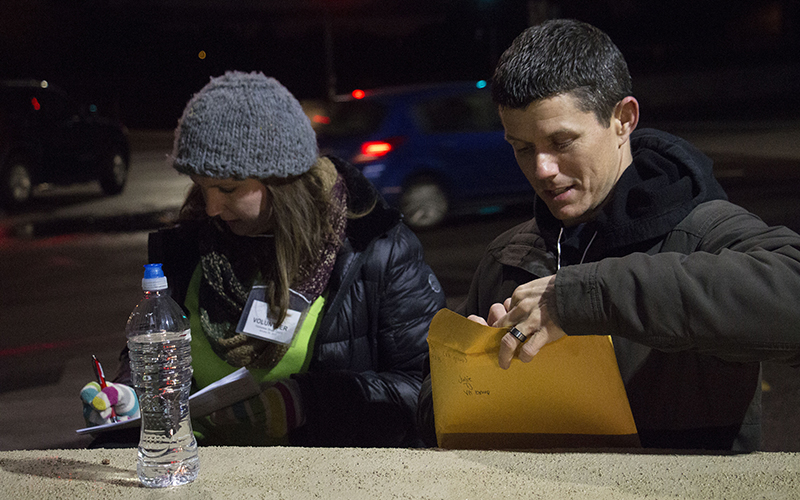 PHOENIX – Armed with clipboards, surveys and layers of clothing, hundreds of volunteers loaded into cars before 5 a.m. on Tuesday with a mission to connect with the homeless as part of the the Point-in-Time homeless count in Phoenix. 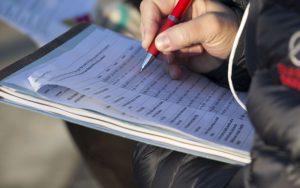 Dawn Whittington fills out a survey during the Point-in-Time homeless count on Tuesday. (Photo by Tynin Fries/Cronkite News)

To comply with the U.S. Department of Housing and Urban Development’s count requirement, the Maricopa Association of Governments rounded up volunteers to walk the streets in cities throughout the county to identify at-risk populations.

HUD has required counties to participate in the street counts since 2007, but Phoenix has held an annual count since 1999. HUD defines a homeless person as someone living or sleeping in a place not meant for human habitation such as a park, car or on the street.

The survey helps identify what types of people are experiencing homelessness and what kind of support they need. Volunteers also count those staying in shelters and other outreach programs. In 2016, there were 5,702 homeless people in the county, 1,646 of which were unsheltered, according to the Maricopa Association of Governments.

These numbers help the government secure funding from the Continuum of Care Program for local programs such as Community Bridges Inc. TJ Howard, outreach manager for the southern region for the nonprofit, traveled from Tucson to volunteer with the Maricopa County street count.

“(HUD has) a lot of federal dollars that they distribute out for programs who help people who are experiencing homelessness,” Howard said. “The count that we did today, the Point-in-Time count, that is a way to gather statistical data for geographical areas to determine where federal funding would be best utilized. So what we do today makes a true impact in the communities we are in.”

Volunteers walk through each city and approach homeless people, ask them questions and offer support.

“We are getting a slight increase in the number of permanent housing dollars every year,” Scott said. “Last December, we were awarded $793,000 for a new permanent housing contract for Community Bridges for permanent supportive housing for the chronically homeless folks.”

This funding allows organizations to offer housing aid and rent assistance to the homeless people they meet during the count. Betty Jean-Rider, one of the women surveyed for the count in Phoenix, said she appreciated the volunteers’ efforts as she had recently become homeless. She said she had slept in a tunnel the previous three nights. 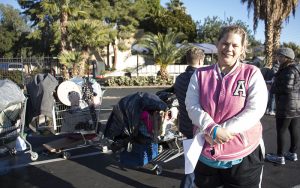 Betty Jean-Rider poses for a portrait in front of her possessions after completing the Point-in-Time homeless count survey on Tuesday. (Photo by Tynin Fries/Cronkite News)

“I’ve been homeless for six days now, and I’m terrified,” Jean-Rider said. “It was either I go on the street or my sister does. And my sister is disabled, so here I am. People don’t realize that we (homeless people) have feelings. We’re not nobodies.”

Jean-Rider lost her job, which caused her to become homeless. But others chose to live on the street.

Despite being offered housing and benefits, Steven Irvin had been living on the streets for more than a year, traveling from state to state on public transportation.

“I have zero tolerance for rules and regulations,” Irvin said. “That’s why I don’t live in a shelter.”

Howard said he volunteers because he can witness the immediate impact his efforts have on an individual’s life.

“The rewarding part is when people do want to get help and you get to watch them change,” Howard said. “They get into housing. They get support. They get a job, and they get family back. They are happy and they smile again.”