Tusayan, which sits at the entrance to Grand Canyon National Park, is just one Arizona community whose livelihood depends on the park and its 6 million annual visitors. The longer the current shutdown continues, the deeper the financial losses. (Photo by Sophia Kunthara/Cronkite News)

Tourists pose for a selfie in Grand Canyon National Park. Some parts of the park will remain open during the government shutdown, and privately run businesses will be open, but no other park services or employees will be available. (Photo by Sophia Kunthara/Cronkite News)

WASHINGTON – As Congress met throughout the weekend to end the government shutdown before it could enter its third full day, the costliest impacts of the shutdown in Arizona have been blunted – for now.

Privately run shops, lodging and other businesses at Grand Canyon National Park remain open and the park itself is accessible, although no park rangers or other National Park Service personnel have been on hand since Saturday, when the shutdown began.

The last government shutdown, for 16 days in October 2013, closed national parks along with other federal agencies. A report by the Department of the Interior later estimated that the shutdown resulted in a $27 million loss in spending at national parks in Arizona, with $17 million in losses at Grand Canyon National Park alone.

Arizona’s estimated loss at the time was second only to California’s, which saw a $31 million drop in spending at parks.

Arizona Gov. Doug Ducey pledged Thursday, as a shutdown loomed, that the state would work to keep the Grand Canyon open, whether the federal government was open or not. And White House officials pledged Friday to keep as many services functioning as possible.

But advocates wondered how long such a piecemeal approach could last.

“They are making it up on the fly,” said Jeff Ruch, executive director of Public Employees for Environmental Responsibility. “Try to keep as much open as possible, don’t spend any money, but don’t close anything. How that works, I don’t know.

“If it is only a day, there will be a lot of confusion with little impact.”

But the shutdown headed into its third full day, and first workday, with limited signs of progress on Capitol Hill. 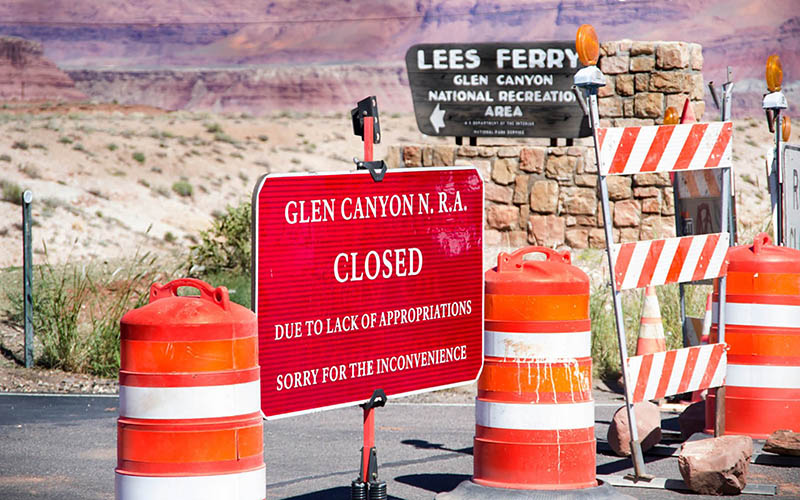 This was the scene at national parks during the October 2013 shutdown of the federal government. The Trump administration is trying to keep more parks open during this shutdown, even though the parks will not be staffed. (Photo by John Dillon/Grand Canyon River Outfitters Association)

The shutdown began at midnight Friday, after lawmakers failed to reach agreement on a continuing resolution to keep the government funded.

Congress has not been able to pass a budget for fiscal 2018, which began Oct. 1, instead passing a series of continuing resolutions, short-term agreements that allow agencies to keep operating at the previous year’s funding levels.

The latest continuing resolution – the third this fiscal year – passed the House late Thursday on a mostly party-line vote. But it failed to get the 60 votes needed to end debate in the Senate, with Democrats demanding negotiations on a long-term bill that includes protection of recipients of the Deferred Action for Childhood Arrivals program and Republicans accusing Democrats of playing politics with the budget.

Lawmakers met all weekend, with little apparent progress. And White House legislative affairs director Marc Short said Saturday that the White House would “not negotiate the status of 690,000 unlawful immigrants while hundreds of millions of taxpaying Americans … are held hostage by Senate Democrats.”

Even in a shutdown, the government does not stop operating entirely. Essential services, such as border patrols and airport screening continue – although those workers will not get paychecks for time worked during the shutdown until the rest of the government is back in operation.

Mail is still delivered and Social Security checks are still cut. Agencies whose funding has already been approved, including Veterans Administration hospitals, will stay open.

But a shutdown still can have in impact.

The 16-day shutdown in 2013 shaved an estimated 0.3 percent off of Arizona’s gross state product in the fourth quarter of that year, according to an estimate at the time from Moody’s Analytics. That would have translated into a loss of $203 million in gross state product for the quarter, as federal spending slowed and the state’s defense and tourism industries took a hit.

Mick Mulvaney, director of the White House Office of Management and Budget, on Friday accused President Barack Obama’s administration of “weaponizing” the 2013 shutdown to have the greatest impact on people. He said the Trump administration would work to keep as many services open as possible, encouraging agencies to use available funds, for example, and letting public areas of parks to remain open, even if services can’t be provided to visitors.

But one parks advocate said there is “no substitute for park services,” and trying to do without could be dangerous for visitors and the parks.

“The parks cannot be operated with skeleton crews,” said John Garder, senior director of budget and appropriations at the National Parks Conservation Association.

Opening parks without staff on hand “threatened resources, by visitors inadvertently going off trail without the guidance of Park Service … it puts visitors at risk, it puts their safety at risk,” Garder said.

Ruch said the uncertainty will continue as long as the government is shut down.

“The parks are not open, but they are not closed, they are in some type of administrative limbo,” he said. “This is a hell of a way to run a railroad.”