PHOENIX – Even before the news reports about problems with Apple’s iPhone X – one reviewer for Forbes called it the worst iPhone ever – some experts had reservations about the facial recognition technology that is one of the phone’s marquee features.

Arizona State University professor Sonia Bovio recently bought an iPhone 8, mainly for financial reasons – the iPhone X sells for nearly $1,000 – but also because it lacks the facial recognition feature of the newer model.

“What are we willing to give up for convenience in terms of privacy and security?” Bovio asked. “We want things to be convenient and easy, but that comes at a cost. And that is usually the cost of our identity, and potentially, our financial risks.”

That’s just one of the issues that have greeted the iPhone X since its November release. Sales have been below expectations. According to published reports, design changes have left some longtime users cold, and the facial recognition software has been criticized as slow or, in some reports, unable to distinguish among Asian users.

But Apple continues to tout the phone’s features, including a super retina screen, a wireless charger and the most talked-about feature: a censored camera for facial recognition.

Users can unlock the phone with a glance. With facial mapping from a TrueDepth camera, Apple says, the phone captures more than 30,000 invisible points to generate a detailed map of the user’s face. 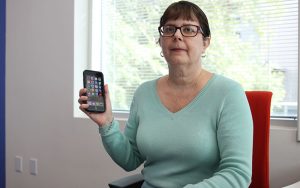 Sonia Bovio bought an iPhone 8 rather than upgrade to the new iPhone X. (Photo by Allison Bailey/Cronkite News)

Company officials said the iPhone X’s advanced Face ID feature makes unlocking a phone faster and easier, but some experts have privacy and security concerns. In fact, some say it may make it easier for hackers to steal important information from the device.

Jason Pistillo, president of the University of Advancing Technology in Tempe, began his cybersecurity school more than 20 years ago. The institution educates and trains hackers and security professionals.

“As Americans and a society at large, we’re rapidly throwing our privacy away,” he said. “The facial recognition is one thing, but it’s also aware of where your eyes are pointing on the iPhone X so that if you’re not looking at it but if you glance at it, it’ll open the text. Having something constantly scanning your face does create an opportunity for government to really abuse that surveillance.

“I’m not worried about it storing a picture of my face so much as the constant surveillance they now have the ability to crack into.”

However, as an owner of an iPhone X, Pistillo said the facial recognition is still a better identifier than the fingerprint-based Touch ID.

“Let me put it this way, it’s secure enough for what I keep on my phone,” he said. “I would not necessarily deploy this to access a corporate database full of Social Security numbers.”

Some Apple customers, like Bovio, prefer the Touch ID because of security concerns.

According to a recent chart, Apple’s iOS operating system is losing global market share as such companies as Samsung and Google have advanced their smartphones and become competitive in the market. Some tech outlets, such as Techradar, named the new Samsung’s Galaxy Note 8 as the best smartphone out right now. First-weekend sales numbers show the iPhone X outsold the iPhone 8 model, but both models had lower sales figures than previous iPhone first-weekend sales.

“I see potential for (facial recognition) being good down the road,” Bovio said, “but I don’t see it as essential. The fingerprint works fine. It’s not going to be a huge improvement to my life to be able to have my phone recognize my face. I don’t see that as an upgrade. I know the next phone I get will probably have that unless this doesn’t work out for them, so I’m going to have to get my head around the idea that this is something that will be coming to all of us, but I don’t want to be the first one using it.”

Since the 20th century, identifications have come in the form of numbers or letters. If someone lost their Social Security number or birth certificate, the government could help them replace it. But people go through plastic surgery, take medications that cause swelling and muscle weakness, get injured, have dental work and age at different rates. Can those physical changes throw off the facial recognition and if so, how can customers reconnect to their phone? 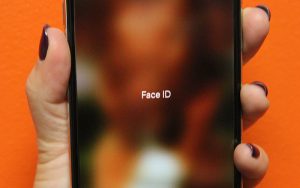 Some experts have reservations about the security risks of the iPhone X’s new facial recognition technology. (Photo by Allison Bailey/Cronkite News)

“The thing to realize is Face ID fails,” said Yan Shoshitaishvili, a cybersecurity faculty member at ASU Global Security Initiative. “Sometimes it fails when I take off my glasses, but sometimes when I put my fingerprint on the Touch ID, it won’t unlock. When Face ID fails, it brings up your password and then I can say, ‘Hey, I actually had plastic surgery’ and then I can reprogram the facial recognition.”

Other cybersecurity experts, including Aaron Smith, who works for the federal government in Washington, D.C., aren’t convinced that Face ID is a better lock than Touch ID.

“I’m not sure if I agree with Apple that it’s necessarily better than using your fingerprint,” he said. “Especially since the whole issue if someone looks very similar to you then they can unlock your phone. I mean I don’t have anyone in my family that looks like me, but it was definitely a concern of mine.”

“My assumption is all that information is stored on the phone and doesn’t get stored on Apple’s servers,” Bovio said, “but that’s a bad assumption to make. Same thing with my fingerprint. Now Apple has my fingerprint most likely, but I think I’m OK with that.”

Facial recognition in the iPhone X is not perfect and still is in its early stages. Experts hope advancements in this technology will enhance security for users. 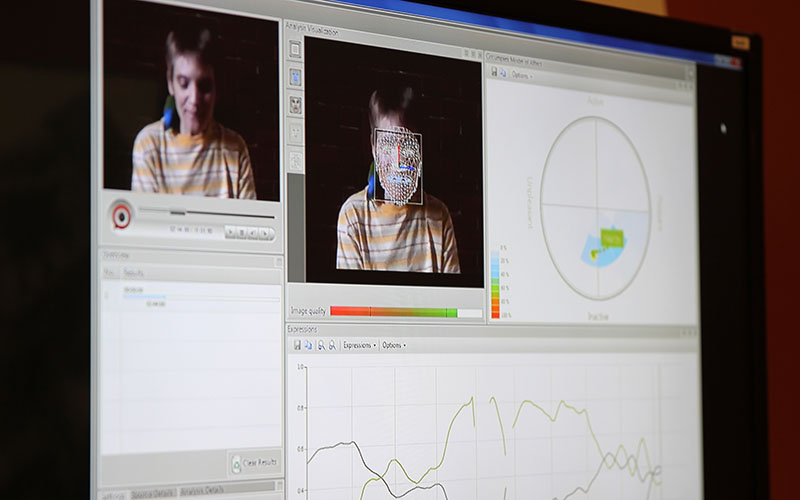 “More secure would be a retinal scan,” he said, “but I’m sure that’s pretty expensive to fit into the software of a phone. But if you can do facial recognitions, you’re already spending money there. The thing is, people are going to hack anything. Soon, you’re going to just take your face with you no matter where you go, and there’s your entry. There’s your Visa card, there’s your debit card. There’s going to be risk no matter what. For what it is right now, I think it works pretty good.”

In the Motivational Interviewing Laboratory at ASU, Brown and clinical research professor Jack Chisum are working on more advanced facial recognition software to improve health care and make students better practitioners at the School of Nutrition and Health Promotion.

In a recent study, they combined facial recognition with voice analysis to identify the emotions of their patients. Through four small cameras, Chisum and Brown can collect data about a patient without being in the same room. One person simply converses with the patient while the software detects 491 points on the patient’s face and analyzes 5,000 voice detections. By reviewing this footage, they can help a doctor understand a patient’s condition and how to help.