McSally’s candidacy comes just days after former Maricopa County Sheriff Joe Arpaio’s unexpected announcement that he would run for the seat being vacated by Republican Sen. Jeff Flake. They join former state Sen. Kelli Ward, who announced her run in 2016, after she failed to unseat Sen. John McCain, R-Arizona, in a GOP primary challenge.

McSally’s campaign kicked off Friday morning with a web video that emphasized her service as an Air Force pilot, touted her positions on national security and aligned her with President Donald Trump. That was followed by campaign rallies in Tucson, Phoenix and Prescott, with McSally piloting a vintage plane from spot to spot. 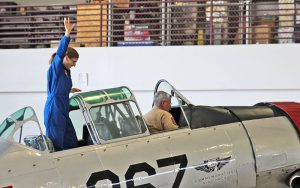 Martha McSally waved to the crowd of about 75 as she descended from her ride – a World War II T-6 trainer – after flying in from Tucson. (Photo by Chris McCrory/Cronkite News)

At the Phoenix event, held in a hangar at Sky Harbor International Airport, McSally addressed a crowd of about 75 sign-waving supporters, doubling down on her tough immigration stance and military background.

Although aligning herself with Trump, McSally dodged a question on reports that Trump made vulgar remarks about Haiti and African countries in a White House immigration meeting Thursday. She vowed instead to reach out to minority voters across the state.

“We’re tirelessly going to engage in all communities and just like I’ve done in Congressional District 2,” she said. “I won … by 44,000 votes in a district that is very, very challenging and has a very diverse population.”

McSally declined to say whether she expected Trump’s endorsement, saying she was focused on running a campaign on the ground. But she promised it would be a hard-fought campaign.

“This is a statewide race with national consequences, and I’m going to run as if the balance of the Senate counted on it,” she said. “And it does.”

Republicans currently hold a one-seat majority in the Senate, and Arizona Democrats waiting outside the hangar Friday were looking forward to the prospect of a bloody GOP primary.

“This primary is not only toxic, it’s going to be very expensive,” said Drew Anderson, an Arizona Democratic Party spokesman. “And Joe Arpaio is going to force folks like Martha McSally and Kelli Ward to go very far to the right, and it’s going to be a very long civil-war primary.”

That bodes well for Democrats, he said.

“Whoever does survive this primary, we’re going to hold them accountable,” Anderson said. “And we have good faith that … Arizona voters are going to be with us.”

McSally’s announcement gives the GOP three relatively well-known candidates in the race. But analysts were giving the edge to McSally, saying Arpaio and Ward will likely split the conservative vote in the primary.

“In her (McSally), they get a real solid candidate, which they don’t have right now,” said Jennifer Duffy, senior editor at the Cook Political Report. 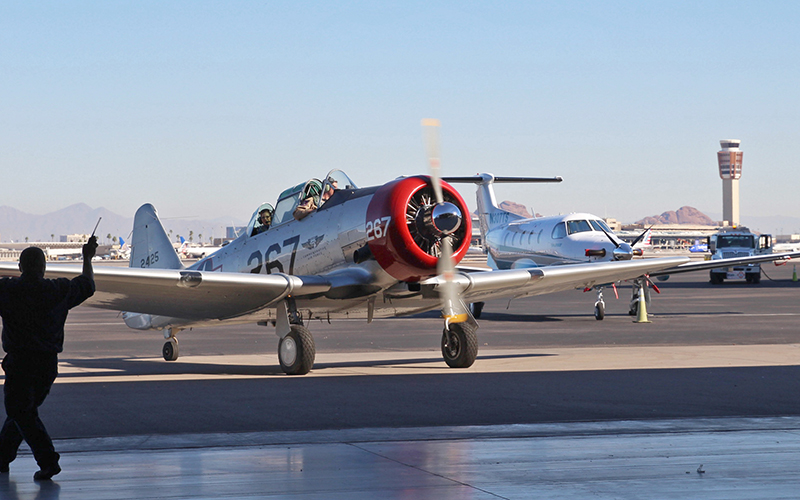 Geoffrey Skelley, political analyst at the University of Virginia Center for Politics, agreed with Duffy that “at first blush” Arpaio’s decision to run is positive for McSally because it can split the conservative vote.

“McSally does look like the Republicans’ best bet in terms of a statewide candidacy,” said Skelley, who is also associate editor of Sabato’s Crystal Ball at the center. “But the fact that Joe Arpaio has gotten into the race is obviously extremely interesting,”

Skelley said McSally’s background as an Air Force combat veteran and two-term House member from a competitive district makes her a strong candidate for statewide office. Even with those qualifications, however, he said it is not a given she will win the primary.

Arpaio would not comment specifically on a McSally challenge, but said Thursday that “everybody has a right to run.” He focused on his own campaign instead, saying he is “only running to win and serve the people of Arizona.”

When asked for comment, Ward’s campaign pointed to the statement it released Tuesday, when Arpaio joined the race. That statement blasted McSally for what it called her refusal to support Donald Trump as a presidential candidate – support that both Ward and Arpaio are likely to make central to their campaigns – and was critical of her stances on immigration, amnesty and the border wall.

“If Martha McSally jumps into the race, she will be just another version of Jeff Flake,” the statement said.

McSally is considered the most moderate of the current GOP candidates but is still fairly conservative compared to the rest of Congress. She has a voting record similar to Flake’s, who was elected to the seat in 2012.

The American Civil Liberties Union’s congressional voting scorecard said McSally voted correctly 23 percent of the time in the last Congress, compared with Flake’s 35 percent. The American Conservative Union, meanwhile, give McSally a correct voting score of 76 percent in 2016, up from 58 percent the year before. The ACU said Flake voted in its favor 79 percent of the time in both years.

Although most analysts said that McSally is likely to win the primary, and likely to attract a broader base of voters statewide than Arpaio and Ward, they also said that any Republican will face a tough challenge in the fall.

The current unpopularity of Trump, combined with the appeal of the current Democratic front-runner, Rep. Kyrsten Sinema of Phoenix, has many rating the Arizona Senate race a toss-up.

Kyle Kondik, managing editor at Sabato’s Crystal ball, agreed with Skelley and Duffy. He said Ward and Arpaio could be “problematic candidates” in a general election.

“For the Republicans, I do think they certainly prefer her over Arpaio and Ward,” Kondik said.