WASHINGTON – A federal appeals court Friday overturned the death sentence in a brutal 1996 triple murder near Kingman, saying Arizona courts did not give enough weight to the killer’s troubled childhood and mental-health issues.

The ruling by a three-judge panel of the 9th U.S. Circuit Court of Appeals in California said the Arizona Supreme Court improperly dismissed mitigating circumstances in Robert Poyson’s case because there was no direct link – or “causal nexus” – between those circumstances and the crime.

That violated Poyson’s Eighth Amendment protection against cruel and unusual punishment, the 9th Circuit panel ruled. It came in “the midst of the 15-year period during which that court consistently applied an unconstitutional causal nexus test” to evidence in capital sentencings, the court said.

Attorneys for the state and for Poyson did not immediately return requests for comment.

Poyson was 19 and homeless in April 1996 when he met Leta Kagen, who invited him to stay in her Golden Valley trailer with her son Robert Delahunt, 15, and Roland Wear. In August, Kagen met Frank Anderson, 48, and his girlfriend, Kimberly Lane, 14, and gave them a place to stay, according to court records.

Once there, Anderson told Poyson he had organized-crime connections in Chicago, leading those two and Lane to conspire to kill their hosts and steal Wear’s truck for the trip north. 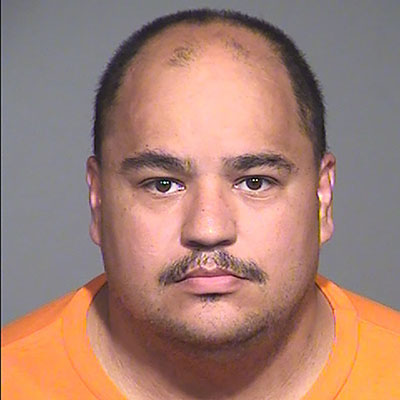 Robert Poyson, on death row since 1998, was 19 and homeless when he was taken in by a woman he would later murder along with two other people. (Photo courtesy Arizona Department of Corrections)

On Aug. 13, 1996, Lane lured Delahunt to a small, isolated trailer, presumably for sex, but they were met instead by Anderson, who slit the boy’s throat with a bread knife. When Delahunt did not die, Poyson began bashing Delahunt’s head against the floor and pounding it with a rock.

At one point, court records said, Poyson took the knife and shoved it so far into Delahunt’s ear that it came out his nose – but still did not kill him. He continued slamming Delahunt’s head on the floor until the boy died of massive head trauma about 45 minutes later.

The trio cleaned themselves up and found Wear’s .22-caliber rifle but needed to borrow ammunition from a neighbor. Poyson spent five minutes testing the rifle while waiting for Wear and Kagen to fall asleep, then cut the telephone line to the trailer so they could not call for help.

Poyson shot Kagen in the head, killing her in her sleep, then reloaded and shot Wear, but only hit him in the jaw. An ensuing struggle spilled outside the trailer, where Anderson knocked Wear to the ground with a cinderblock. Poyson kicked Wear and threw the cinder block repeatedly at his head until Wear stopped moving.

The three concealed Wear’s body with debris from the yard, took his wallet and keys and left in his truck for Illinois, where they were arrested several days later.

Poyson was convicted of the triple murders in March 1998, after a six-day trial.

At sentencing, the defense cited Poyson’s history of drug and alcohol abuse, his drug-addicted mother and abusive stepfathers, and a diagnosed personality disorder as some of the many mitigating circumstances that should have argued against imposition of the death penalty.

But the trial court said those did not outweigh the three aggravating factors: multiple deaths, financial gain and the “especially cruel, heinous or depraved” nature of the killings.

The Arizona Supreme Court upheld the sentence in 2000, noting that Poyson had presented evidence of many problems in his past but adding that none appeared to have “rendered him unable to control his conduct” on the night of the murders.

The same 9th Circuit panel had upheld Poyson’s sentence in 2013. But the panel reversed itself – and Poyson’s death sentence – on Friday, noting that in the years since 1998, the 9th Circuit and the U.S. Supreme Court have ruled that Arizona courts’ policy of giving no weight to mitigating circumstance that have no direct link to the crime is unconstitutional.

In a grudging concurrence, Circuit Judge Sandra Ikuta said the intervening rulings were incorrect and Poyson should not get another hearing. But the panel is still bound by those “erroneous” decisions, she said, “reluctantly” agreeing with the panel’s ruling Friday.