In November, he announced a pilot program to help get former inmates to their jobs after they’re released. He also has implement a “ban the box” policy for state agencies. And he has led efforts to add employment centers to state prisons.

“We are committed to providing real second-chance opportunities to those who have paid their debt to society,” Ducey said in a statement.

Tim Roemer, the governor’s public safety policy advisor, said there’s a good reason Ducey has focused so much attention on the issue.

“Recidivism is a public safety concern,” he said. “So the same individuals are committing the same crimes. So No. 1, we think reducing recidivism makes our communities safer.”

Researchers estimated states could save more than $635 million combined in one year alone in averted prison costs if states reduced their recidivism rates by just 10 percent, according to Pew Charitable Trusts. 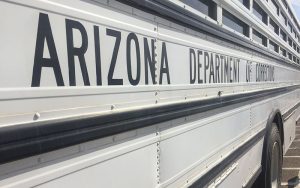 The Arizona Department of Corrections worked with Gov. Doug Ducey to add employment centers in prisons in a move to find jobs for prisoners and reduce Arizona’s recidivism rate. (Photo by Jenna Aronson/Cronkite News)

The state launched its “Uber for Jobs” program late last year. The state partnered with the ride-sharing company – each contributing $5,000 – to provide rides to former inmates who need to get to their jobs.

The Governor’s Office cited a survey of more than 400 inmates at the Arizona State Prison in Florence conducted by Arizona State University researchers. More than half of the respondents  identified a lack of reliable transportation as a barrier to successful re-entry, according to a news release.

The state also has launched employment programs inside three state prisons. Specialists provide the inmates help with skills such as resume building, interviewing, money management, how to dress professionally and how to explain convictions to an employer.

“The Top 8 risk factors for recidivism include employment and employability skills,” said Karen Hellman, director for the Division of Inmate Programs and Reentry at the corrections department. Her department oversees the employment centers at the prisons.

Misty Robledo said she has been to prison three times, but she’s confident this will be her last.

“This program has opened so many doors for me,” she said. “It’s helped me with building my resume, and I just have the confidence and the self esteem to go back out there and try to find a better job.”

Ducey also signed an executive order in November that requires state agencies to delay questions about applicants’ criminal records until after they pass through initial interview, according to a release.

Officials estimated that 1.5 million adults in Arizona have arrests or convictions on their records, according to a news release.

Grassroots organization All of Us or None started the national campaign with the goal of getting states to pass legislation that removes the felony check box on job applications so ex-offenders have a better chance at getting a job interview.

The idea is that employers first judge applicants by their qualifications and personality, Beth Avery, a lawyer with nonprofit National Employment Law Project, a labor rights nonprofit, told Cronkite News in 2017.

However, some critics have questioned the policy’s effectiveness.