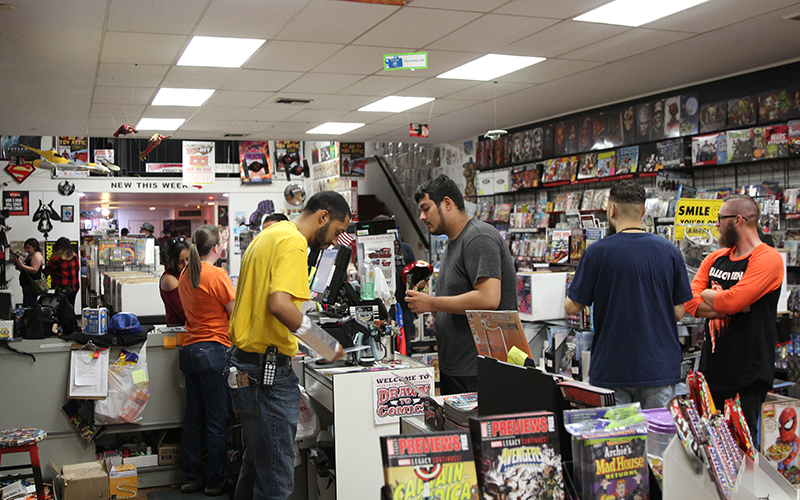 Drawn to Comics in Glendale has a variety of comic books and comic merchandise. (Photo by Maddy Ryan/Cronkite News)

GLENDALE – On a warm Saturday night in October, comic book fans traveled to Drawn to Comics in Glendale where local comic book artists promoted their work at the shop’s annual Halloween Comicfest.

Young children in costumes darted around the adults. Young women waited in line to buy their comic books.

It’s a scene some comic book industry experts say they wouldn’t have predicted years ago, when the audience consisted of mostly older adult men.

“It’s an industry that has struggled for many, many decades to stay viable because the comic book reading audience is really incredibly small,” said Shawna Kidman, an assistant professor for the Department of Communications at the University of San Diego.

But domestic sales of comics and graphic novels have been rising for years, reaching $870 million last year, up from $265 million in 2000, according to Business Insider. 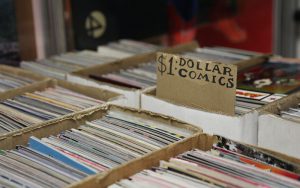 domestic sales of comics and graphic novels have been rising for years, reaching $870 million last year, up from $265 million in 2000, according to Business Insider. (Photo by Maddy Ryan/Cronkite News)

Experts said the field has seen a resurgence in popularity thanks to the internet, movie adaptations and conventions. Today, comic book sales have surpassed monthly sale peaks – the kind of growth the industry hasn’t seen since 1997.

Comic book orders in June 2016 reached a new peak of more than $58 million in sales, according to Comichron.

Ken Brown, the co-owner of Drawn to Comics, said he believes the Arizona market is especially large because of the famous comic artists who live here. In fact, the organizers of a major comic book convention chose the state to host a new comic book convention next month: Ace Comic Con. Glendale’s Gila River Arena will host the event Jan. 13-15.

Ace Comic Con will be a new form of “con” – short for convention – Gareb and Stephen Shamus said in a news release. Rather than holding it in a convention center, they will hold it an arena. The setting allows for a more fan-engaged experience because people can sit in any seat and watch live events and panels on the Jumbotron and other arena TVs, Gareb Shamus said.

“Now that the world has kind of accepted superheros – and geeks and nerds are a lot more accepted out there – now it’s about embracing that community on a global basis,” Gareb Shamus said.

He said the event will live stream panels on social media sites and the Ace Universe website.
“We wanted to pioneer in the sense that anybody and everybody around the world that would want to be involved or be part of the community could do that,” Gareb Shamus said.

The Shamus brothers have produced 175 comic cons in North America, according to the Phoenix New Times. After a break from the industry, Gareb Shamus said they wanted to design the future of the comic con world. 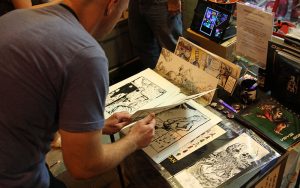 During the Halloween ComicFest in Glendale, customers flipped through comics created by local artists. (Photo by Maddy Ryan/Cronkite News)

Comics began rising in popularity in North America during the 1930s, the start of the Golden Age of Comic Books – when a new category of characters emerged, according to an article from PBS. Mark Siegel, the editorial and creative director of publishing company First Second Books, said comics were sold as pamphlets with Superman as the iconic figure. Siegel said it wasn’t until the 1960s that more “psychologically complex superheroes” – such as the X-Men – emerged.

“In America, there was a stigma,” Siegel said. “There were attacks on comics by people saying they were responsible for delinquency and illiteracy.”

One such attack came from Frederic Wertham, who launched a figurative war against comics and their illiteracy in the 1940s, according to Slate.

Siegel said the comic industry didn’t see a revival until 1986 with the release of “Maus.” The graphic novel, which won a Pulitzer Prize in 1992, told the story of the Holocaust through the eyes of a mouse, according to Sabotage Times. Siegel said the publication showed that comics were not illiterate and could educate children.

Comics sales slumped until about 2004 when the Manga, a Japanese-style comic, invasion happened, Siegel said.

“Suddenly, book stores couldn’t clear their shelves fast enough,” he said. “All the publishing houses here in New York were noticing millions of dollars exchanging hands. So all the publishing companies started looking toward graphic novels.

“They’re right for our time. It’s a kind of visual literacy that’s emerging.”

The Phoenix market is particularly well established because Todd McFarlane, the Spider-Man artist of the late 1980s and creator of the antihero Spawn, lives in Ahwatukee Foothills and used to have his own toy shops in the area, according to the East Valley Tribune.

“McFarlane used to do a lot of conventions and lot of promoting,” Brown said. “He’s a major person that helped mainstream the comic book and pop culture out here in Phoenix.”

McFarlane is now bringing Spawn back to the movie screen after more than 10 years, according to Entertainment Weekly. 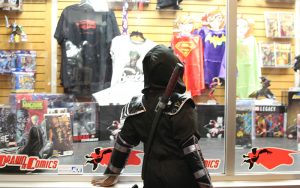 Kids dressed up for the Halloween Comicfest at Drawn to Comics in Glendale. The event gave local comic book artists the opportunity to promote their materials. (Photo by Maddy Ryan/Cronkite News)

The popularity of superhero movies has spilled over into comic books because readers want to learn more about a particular character: “If you look for the best-selling titles in comic books, they’re almost always related to these big adaptations,” Kidman said.

Comichron tracks the top-selling comics each year – dating back to 1991 – and the past three years show a direct relation to top-grossing blockbusters.

“I’m getting a lot more people now that are saying, ‘Oh man, I saw this movie, can you tell me more about it?'” Brown said.

But he said it’s hard to point Arizona customers to the right comic when he gets this type of question because the movies often condense years of comic book stories into a two-and-a-half-hour film.

The revival of the industry has stirred people’s interest in comic collecting and selling, according to a Forbes article. Comics with appearances by characters and superhero groups who have recently been in movies – such as “Guardians of the Galaxy” and “Suicide Squad” – have increased their characters’ value in comic books by 1,057 percent and 548 percent, respectively, according to Comic Gains.

Joseph Newconer, a comic book fan who attended the festival in Glendale, has collected comics since he was a child, and he now he collects them for his daughter. Newconer said his collection isn’t worth much now, but he hopes they will choose wisely and increase the collection’s value.

Newconer said the popularity of Marvel comics sways the type of comics he picks.

“Captain Marvel is coming out, so we will make sure to get the new number ones and get some of the back issues, because I know it will be worth a little bit more when she’s older,” Newconer said.

The internet has helped change the demographics of comic fans.

Cazares started showcasing his work on the internet.

“I have a fine arts background, but I never thought about using artwork to tell a story until about seven year ago,” Cazares said. “I realized I was liking a lot of stuff that was coming out, especially the web comics.”

Cazares said he also sees entire families interested in comics rather than only older males. He credits the change to the internet’s accessibility.

The internet also provides a space for fans to connect. In Arizona, one such group is Comic Book Nerds United.

The group started about two years ago, and it has about 1,000 online members who discuss new comics on the group’s Facebook page, said Ashley Maul, the administrator for the group.

“A lot of them, when they introduce themselves, they say, ‘I don’t know a lot about comic books, but I really like the movies, and they got me interested in the books. Does anyone have any suggestions for what I should read first?'” Maul said.

Conventions have proven a game changer 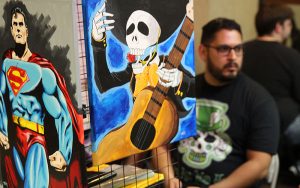 Hector Echevarria paints comic book characters and promotes his work online. He showed some of his work at Drawn to Comics in Glendale. (Photo by Maddy Ryan/Cronkite News)

Comic conventions in the U.S. started in 1970 in San Diego, and data shows the events have seen record attendance over the past few years as a result of blockbuster popularity, experts said.

Similar events have spread throughout the country.

When conventions started in 1970, they focused on comic books, according to Comic-Con. But in the past few years, Maul, who has volunteered at cons for six years, said they’ve become more pop culture cons – meaning they focus more on movies and TV shows.

Maul said she attendees often focus on the cosplay and celebrity autographs aspects rather than comic book sales.

The future: What can the world of comics expect?

There is a new bundle of comic book movie adaptations set to hit theaters between 2019 and 2028, according to Marvel Cinematic Universe. Siegel said the comic book revival isn’t slowing down anytime soon.

Comics provide an easy way to make movies because somebody else already has laid out the story, Brown said. “I think of comics as Netflix on paper,” he added.

Graphic novels also are gaining popularity because readers like to follow an author’s voice rather than a comic book brand, Siegel said.

“Right now, we get calls from Hollywood studios asking about optioning stuff,” Siegel said. “They know that some really good storytelling is happening here in this medium.”

Recent graphic novel movie adaptations include “Scott Pilgrim V. the World” and “Watchmen,” according to Goodreads. Siegel said the rise of graphic novels shows no sign of slowing down.

He is working on a graphic novel adaptation with Pixar animation designers.