The app DROPIT has become part of the Suns in-game entertainment. Fans bid on auction items during a short period of time. (Photo by Kevin Palacios/Cronkite News)

For an older generation, the constant music and in-house emcee might be a bit much. But for most others, a digitalized lifestyle equates to a shorter attention span and the need for constant entertainment. The Phoenix Suns, who are celebrating their 50th anniversary in the NBA, say they are committed to providing fans with a variety of options.

“We almost feel like our show is as big as the team on the court,” said Sumer Meyer, Suns Dancers manager. “We’re just waiting for the next break.”

Dancers are just one part of the equation. Throw in an in-house DJ, an acrobatic Gorilla mascot, an entertainment-centric video board and more and the amusement goes from tip-off to final buzzer at Talking Stick Resort Arena.

Fans needs to be entertained. Sixty-three percent check sports social media sites while attending a game, according to a recent study by Game Changer. Teams are responding by keeping the action going. In 2013, Sacramento Kings fans smashed the Guinness World Record for “loudest crowd roar” at 126 decibels.

Despite their 11-21 record, the Suns believe they still have reasons for fans to cheer The team is led by Devin Booker and a young core mixed with veterans to help guide the group as it develops on the court. At Talking Stick Resort Arena on game nights, fans say it’s hard not to cheer on three-pointers by Booker or rim-ripping dunks by Tyson Chandler.

This excitement that fans feel is fueled not only by the players but by the environment that is created by the Gorilla mascot, Suns dancers, superfan Mr. ORNG, DJ Dean Michaels and in-game host Weezy.

“We’ve put a lot of effort, especially this year, into our in-game entertainment,” said Michaels, the official DJ of the Suns and Mercury. “We’ve focused a lot on the Suns dancers and they’re stepping up a lot.”

The team has a collective group of dancers, from the Suns Dancers to Solar Squad to even Golden Grannies, that fuel the energy level in the arena.

“We’re watching the game, we’re supporting the players but we’re focused on being prepared for the next timeout,” Meyer said. “We want our breaks to be as entertaining as the basketball game being played on the court.” 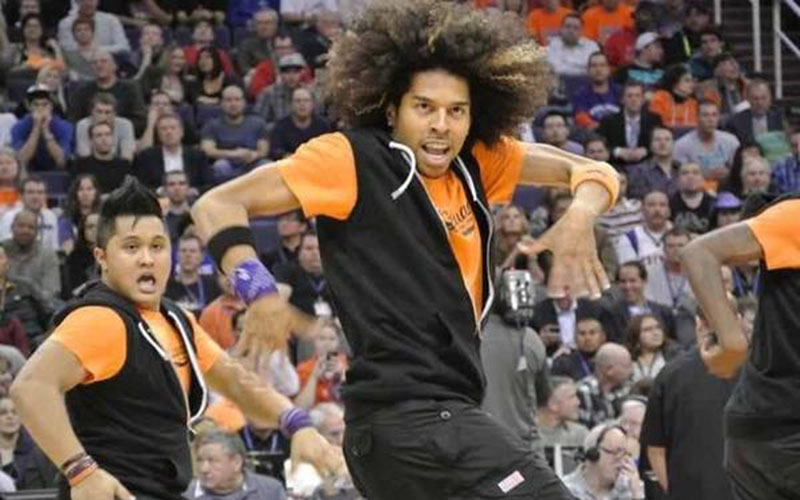 Weezy, the in-game host for the Phoenix Suns and the coach for the Solar Squad, is a key player for the team’s in-game entertainment. The Suns have made keeping fans attention a priority. (Photo courtesy Phoenix Suns)

Their contributions might appeal to those solely there for the in-game, off-court experience.

“I know as a little girl when I’d come to game I really didn’t care about the basketball. I wanted to see the dancers and we see that same thing happen now,” Meyer said. “There are just a lot of kids that will see Solar Squad or Suns Dancers and they can relate to that.”

Dean said, “We try to add a lot of visual elements as well as musical elements. We have the dancers come out or the hip-hop squad come out and they dance along or the Gorilla might come out.”

The music played in the arena is one way to energize the crowd, but it is also to fuel players at all the stages of the competition.

Before every game, Michaels is posted at half court at his DJ booth playing music as players come out to tune up, selecting songs that he knows players like.

“We do a lot of music toward the players especially when they’re warming up to get them psyched up for the game and during the game,” he said.

One the teams tip off, Michaels provides music during breaks and as the Suns dancers perform.

“I think (music) motivates the crowd, it can shift the crowd,” he said. “I think it brings them in the game and sets a mood for where we want to go throughout the game.”

With a wide variety of fans at the arena for a Suns game, the in-game experience varies.

“For some people, they want to be blown out of their seats with the music and really blare and be at a concert venue, and others want to focus on the game and hear their neighbor to their left or right,” said Brett Samet, Suns game presentation manager.

The Suns have also brought musical performers like Futuristic and Montell Jordan to participate in the festivities this season.

“You have those individuals that aren’t there for the basketball game itself but the craziness of the atmosphere, the videos that we play, the music that’s played, just hanging out with their friends,” Samet said.

This “craziness” is enhanced during games with the Suns’ version of Skee-Ball or the T-shirt toss. The Suns try to be sensitive to seat location.

“We try to do it upstairs and downstairs so if you’re sitting upstairs it doesn’t mean you aren’t going to get the same amount of entertainment as you’re if you’re downstairs,” Meyer said.

As technology has enhanced the elements of dance and music to provide the best in-game experience, the Suns also have brought in a new app that helps keep fans engaged through their devices.

The team has partnered this season with DROPIT, which provides fans a way to participate in a live auction during halftime or a game break. The app appears on the big screen and allows those in attendance to win prizes for a fraction of the cost.

“DROPIT is a free app that runs live 60-second drop auctions that fans bid on from their seats,” said Peter Howell, CEO and founder. “The first fan to swipe up wins, making it like a game of ‘chicken,’ where fans push their anticipation and excitement to the limit. The longer they wait, the lower the price drops – but they could miss out if they wait too long.”

One of the packages that the Suns and DROPIT offered was a pair of courtside tickets and a VIP tour of the locker room. This package was valued at $3,000 and bought for $76 by a fan who resisted the urge to swipe up right away. Another auction featured a Honda CRF125F dirt bike that was valued at $4,000 and went to a fan for $618.

“Each DROPIT auction combines the pace of a video game, the intimacy of a mobile screen with the scale of a venue’s large format digital board, and the excitement of a live event,” Howell said. “It’s a thrilling and memorable way to bring fans and brands together under one roof.”

DROPIT and the Suns will feature several auctions during select games to allow fans to win unique experiences and items in celebration of the 50th anniversary.

Throughout the season, the Suns will host five “Decade Nights” celebrating the different eras in Suns history.

As part of the event, the Suns will feature a concession item inspired by the era being celebrated and it will be located all around Talking Stick Resort Arena.

Food options have become a priority for organizations in marketing their teams. Some of the new concession items include Big Smack, Arizona Cheesesteak, BBQ Nachos, Kahlua Pork Sliders and What the Cluck?

The What the Cluck? is a chicken sandwich with fried chicken, maple-Dijon slaw and bread-and-butter pickles on a Parker House roll.

The Suns say they are committed to performing well not only on the court but also off the court as in-game entertainers.

“We understand the value that the entertainment brings here to the games so we’re putting a lot more effort and focus into the entertainment to really give these fans the real ultimate experience,” Michaels said.