PHOENIX – Melissa de la Rosa has been boxing at Jabz Boxing in Arcadia for just under a year. The women-only facility fulfills more than de la Rosa’s desire to amp up her cardio and relieve stress. 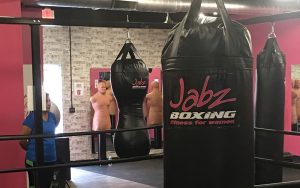 Scottsdale-based Jabz, a women-only boxing gym franchise, has 11 facilities in the Phoenix area with eight more slated to open in the coming months. (Photo by Tim Johns/Cronkite News)

“I’m an Orthodox Jew, and I can’t work out uncovered around men,” she said. “So, I come here because I can uncover because it’s all only women.”

Over the past several years, women-only fitness facilities have exploded in popularity. More women now have gym memberships than men, and women-only fitness is the fastest-growing sector of the fitness industry overall, according to my30minutehit.com.

Women-only boxing gyms have played a role in that growth. Boxing offers an intensive, full-body workout made popular by celebrities such as Gigi Hadid and Khloe Kardashian.

Scottsdale-based Jabz, a women-only boxing gym franchise, has 11 facilities in the Phoenix area with eight more slated to open in the coming months.

“It is a really good workout – 45 minutes,” De la Rosa said. “It’s solid running, jumping, hitting, punching. You relieve stress. You relieve everything. You just come in, and you let loose.” 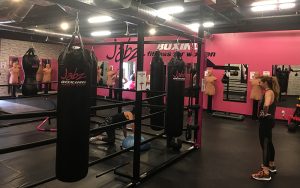 Over the past several years, women-only fitness facilities have exploded in popularity. Jabz Boxing in the Arcardia neighborhood of Phoenix is part of a franchise. (Photo by Tim Johns/Cronkite News)

Josette Rosene, the owner of Jabz Arcadia, said there are many reasons women want to work out with just other women.

Rosene said women feel more comfortable and don’t feel as intimidated as they might at other kinds of gyms. For de la Rosa, the gym makes her want to keep coming back.