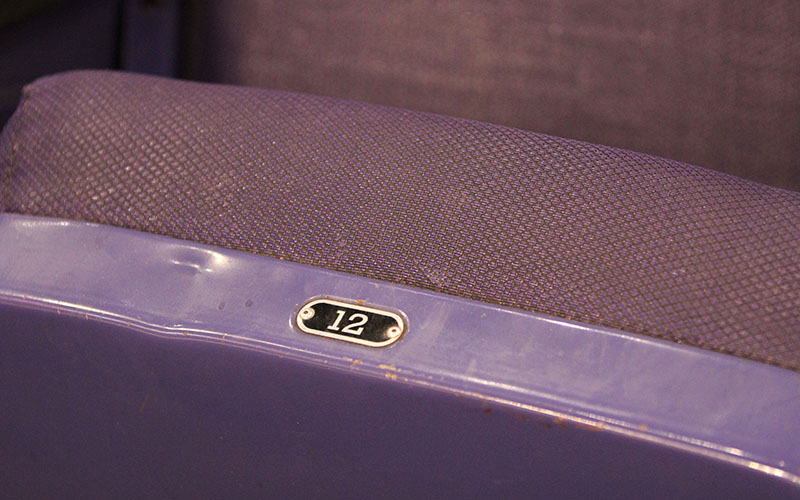 Section 113, row 15, seat 12 attracted fans from as far as New Zealand during a recent homestand at Talking Stick Resort Arena. The popularity of Suns fans is widespread. (Photo by Jamie Nish/Cronkite News)

PHOENIX — Once upon a time, the Suns were the face of the Valley. They were the community’s first major sports team, beginning play in the 1968-69 season.

In 1988, the NFL’s Cardinals relocated to Tempe from St. Louis, and in 1996, the NHL’s Winnipeg Jets became the Phoenix Coyotes. Two years later, the Diamondbacks played their first game at Chase Field.

But for two decades, the Suns were the only pro game in town.

After a steady increase in attendance from 1985 to 1991, the Suns hit their stride in 1992. Entering the 1992-93 schedule, the team traded for Charles Barkley after it had been eliminated from the Western Conference semifinals the previous season. From 1992 until the lockout in 1998-99, which shortened the schedule to 50 games, the Suns sold out their arena. They have yet to sell out an entire season since.

With the team’s playoff drought reaching seven-plus years, it raises an interesting question: Who are Suns fans these days?

During a recent stretch of four games at Talking Stick Resort Arena in early November, we took a look at the fans who filled one seat:

It’s a lower bowl seat, located in the corner of the stadium with an unrestricted view of the court. The people that filled the seat were a diverse group, varying in age, interest level and residence. 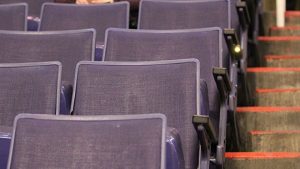 This corner seat in the lower bowl of Talking Stick Resort Arena attracted a wide variety of fans during a recent homestand. During a four-game stretch, two Canadians occupied the seat. (Photo by Jamie Nish/ Cronkite News)

The Suns’ dip in attendance correlated not only with the NBA lockout, but also with the arrival of the Diamondbacks, who won a World Series in 2001. The newest team in town brought the city its first championship and were quickly challenging the Suns for the entertainment dollar. Despite the Suns making the playoffs for 13 straight seasons from 1989-2001 and then again in 2003, a successful history is not enough to compensate for recent attendance woes.

The Suns had trouble finding their footing in the tough Western Conference after the departure of Steve Nash following the 2011-2012 season. The point guard left for the Lakers as the Suns’ all-time leader in free throw percentage, while posting the second-most three-pointers and third-most assists in team history.

The Suns have only been at or above .500 twice in the last seven seasons, which dates back to last time they made the playoffs.

Fans have taken notice of the team’s recent struggles. They ranked 19th in the NBA in attendance in 2016-17, averaging 17,283 per game and filling up 93.8 percent of Talking Stick Resort Arena.

The fans who occupied section 113, row 15, seat 12 were a fascinating cross section: Three of the four were from outside the United States. Two mentioned Devin Booker. And one, as is often the case in Arizona, was rooting for the other team.

Grace Bennik attended the game with her family to watch the Suns play the Miami Heat after making the trek from Alberta, Canada. Although warm weather was a factor in their decision to come to the Valley, they had another reason to celebrate.

“Me and my husband have been married 40 years this year so we took our kids and grandkids to Phoenix,” she said.

The team’s history was also a pull. They attended a Suns several years ago because her husband was a fan of another Canadian: Nash.

“My husband loves basketball. He watches it all the time.”

If history were enough to lure fans, the Suns would have no trouble selling seats. The retired Nash remains wildly popular. And past players like Charles Barkley, Tom Chambers and Connie Hawkins give the team a rich history. 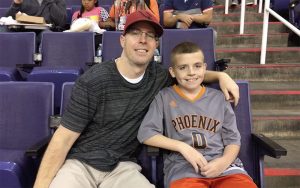 Jake Pennington, 11, attended the Suns game because he is a fan of the team. Even though he wore a Marquese Chriss jersey, the sixth-grader said Devin Booker is his favorite player. (Photo by Matthew McClure/Cronkite News)

Two nights later, when the Suns took on the Orlando Magic, 11-year-old Jake Pennington filled the seat. He and his dad were determined to make the most of their long weekend together by going to a basketball game.

Though he donned a Marquese Chriss jersey, the sixth-grader confidently stated that Devin Booker was his favorite player. Booker is a popular choice, especially after becoming the fourth-youngest player to score 3,000 points four nights earlier.

The Suns drafted Booker with the 13th pick in the first round of the 2015 NBA draft. He quickly became the face of the Suns franchise, which is around the time Pennington began to follow the team.

Since 2013-2014, only two players have been with the team longer than Booker: Alex Len and T.J. Warren. Booker is definitely an attraction. He is heavily involved in the community and a building block for the franchise.

The young Suns fan said this wasn’t his first NBA game. He hopes it won’t be his last either.

“We already have tickets for one more game,” he said “We’ll probably go to more. I’m hoping. I try to watch them every night on TV.”

Since Pennington started watching the team, he hasn’t seen the Suns play in the postseason. His expectations for the team going forward are clear.

“I want them to be at least contending for a playoff spot in the next couple of years,” he said.

A different fan occupied Seat 12 to see the Suns play the Timberwolves, but he did share one thing in common with Bennik, the fan from Day One: Both hail from Canada.

Scott Linner, 35, made the journey to Phoenix from Saskatchewan, vacationing with family during the Canadian holiday Remembrance Day, which parallels Veterans Day.

This is not the first time the Canadian came to Phoenix to enjoy a little sunshine. He has come before for Suns games but this time, he and his family were not cheering for the home team.

There have not been a lot of NBA stars to come out of Canada and Wiggins joins Nash as the only Canadians to win an individual award. Wiggins took home the Rookie of the Year award in 2014 while Nash won the MVP for 2005-06.

Many players factored into why Linner loves basketball. But there was only one who captured his heart at a young age.

“I’ve been a basketball fan for a long time, 20 years maybe,” he said. “Ever since watching Michael Jordan.”

Fans coming to watch opposing teams has been a problem that has plagued many Valley teams. Only recently has it been an issue with the Suns 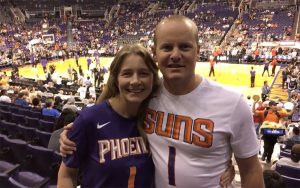 Lisa Barber, along with Lee Greedus, traveled the farthest of the seat-occupiers, coming from New Zealand. While rugby is a popular sport played south of the equator, these two share an equal amount of enthusiasm about basketball.

“This our third Suns game this week,” said Barber, who works in health and safety for the police department. “We’re actually really loving it.”

She said the energy during an NBA game is unlike anything they have in New Zealand. Both Barber and Greedus, a police officer, sported Devin Booker shirts. He wore white while she wore purple. Their new investments were simply due to his pure young talent.

“We are (Booker fans) today,” Barber said. “We were just so impressed with him the first couple of games we’ve seen. We couldn’t leave town without getting something to remember him by.”

Their pit stop in Phoenix was one of many over the course of their vacation. The two are avid NBA fans who plan to attend more games during their holiday when they visit Los Angeles, Salt Lake City and San Francisco.

“We’ve been here about six days,” Greedus said. “In between games, we’ve been up to the Grand Canyon and back. We just went up to Las Vegas for two nights and back again for the game. Phoenix has been our base for a couple days now. We’ve just been touring.”

The NBA is a big reason they came to the United States, they said, and they already have attended nine to 10 games. Although New Zealand is not known for producing a lot of NBA talent, they do have one “kiwi” player as they called him, who is pretty special.

“My heart is with Steven Adams since he’s from home,” Barber said of the Oklahoma City big man.

Four nights, four fans, four different reasons for attending a Suns game. Although the team may be rebuilding, many fans still appreciate the athleticism and skillset unique to NBA players.

Of course, winning would surely attract even more.