Museums in Houston, Oregon and Tucson couldn’t keep their doors open, according to media reports.

In Phoenix, Joe Hersey worried the collection he had curated for years would meet the same fate.

Hersey, the director of the Pioneer Telephone Museum, faced a dilemma when the volunteer group that runs telephone museums across the country lost its sponsor in 2016. 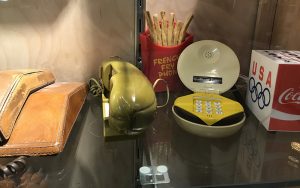 The hamburger phone at the Pioneer Telephone Museum in Phoenix is a favorite among the kids who visit the museum. (Photo By Samantha Pouls/Cronkite News)

But Hersey found a new home for his collection at the Living Pioneer Museum, which recently opened the telephone museum exhibit within its facility in north Phoenix.

“I didn’t want to throw it all in the dumpster because that’s where this whole thing was headed if we didn’t find a home for it,” Hersey said.

Hersey said he was relieved to find the space, but he knows the museum faces challenges ahead. Few people – beyond scheduled school field trips – visit the museum.

That’s a shame, he said, because of the significant role the telephone played in America’s history.

“It’s part of our history, and it shows what we have built on to give your generation what you have today,” Hersey said.

During one recent field trip with students from St. Gregory Catholic School in Phoenix, Hersey stopped at a display that uses a series of cylinders and wires to show how people made long-distance calls decades ago.

Hersey asked the kids if they wanted to try it, and every student rushed toward the phone.

“I really liked it. My favorite part was when you had to dial in the number and then listen on the other side,” fourth grader Sofia Graves said.

Telephone museums tell the story of America’s telecommunications advances, starting with Alexander Graham Bell’s accidental first phone call. According to United States History, Bell made his first call to his assistant on March 10, 1876. Bell received a patent the same year.

“We’ve been collecting museum-quality things since the 1950s,” Hersey said. “We’re probably in our fourth generation of people who have run the museum.” 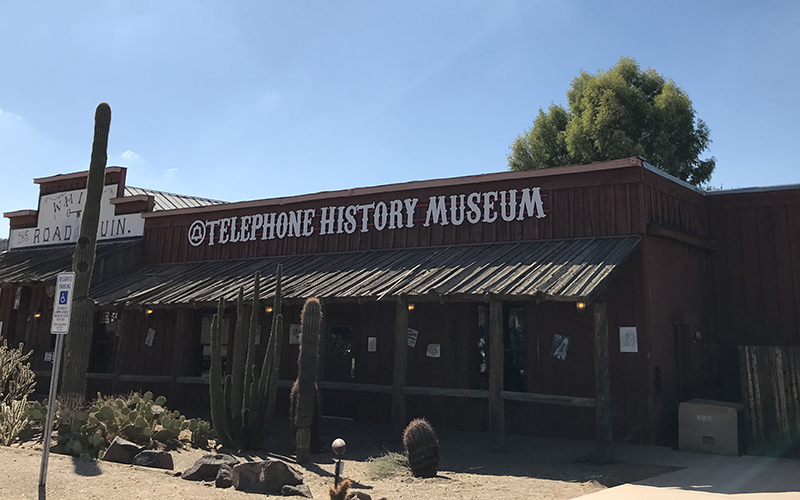 The Pioneer Telephone Museum recently moved from a CenturyLink office in central Phoenix to the Living Pioneer Museum in north Phoenix. (Photo By Samantha Pouls/Cronkite News)

Sean Davis, a volunteer, said the most frequent question he gets is how phone calls were made across the ocean.

“Before the telephone line actually got connected in 1955, it was actually done via radio waves,” he said. “They didn’t have a telephone line that actually went across the ocean. The radio wave worked, but it wasn’t reliable. It depended on weather and stuff like that.”

Hersey, 82, worked for the telephone industry for 35 years until he retired in 1988. His love for the industry guided him to start working for the Phoenix museum in 2000.

The Pioneers – a nonprofit group formerly known as the Telephone Pioneers of America – runs Pioneer Telephone Museums throughout the U.S.

For years, CenturyLink had provided display cases, janitorial services, electricity, computers and other essentials for the museum in Phoenix, Hersey said. The museum was housed in one of CenturyLink’s offices in central Phoenix.

“All we had to do was put stuff in the display cases, build them and run the museum,” he said.

In 2016, CenturyLink pulled out of the sponsorship.

Mark Molzen, the issues manager at CenturyLink, said in an email that the company “continually evaluates” its resources and business practices. The company cited reduced participation with the Pioneers when it made the decision.

That loss of sponsorship meant Hersey was stuck with numerous artifacts, but nowhere to house them.

The Living Pioneer Museum’s space is smaller: The telephone museum went from a 3,800-square foot space to a 2,700-square-foot space. A majority of the collection did not fit in the new location, and it was sold to museums in California.

“It was chaos to move all of this,” Hersey said.

Hersey’s next challenge is to find enough volunteers to keep the museum going.

“I just don’t know that many people that are interested in volunteering,” Davis said. Davis is a history major and collects telephones on his own, so the topic interests him.

Funding is another obstacle. Hersey said they depend heavily on the Living Pioneer Museum.

“Right at the moment, they’re funding the lights, the air conditioning, all these kinds of things,” Hersey said.

“In the business sense, we are not a profit maker,” he added. “History is not profitable.”