Luis Velasquez and Robinson Dominguez came from Venezuela to play basketball. Both say they were kicked out of Elite 1 Academy and had nowhere to go. (Photo by Jasmine Spearing-Bowen/Cronkite News)

BUCKEYE – They were teenagers from Venezuela, drawn to Arizona’s Elite 1 Academy with hopes of playing college basketball or making it to the NBA. 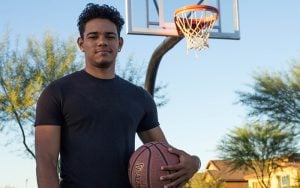 Robinson Dominguez, 19, said he was kicked out of Elite 1 Academy because he was injured. He is now living with a Valley family while he finishes high school. (Photo by Jasmine Spearing-Bowen/Cronkite News)

Luis Velasquez and Robinson Dominguez said they were promised safe housing, meals, an education and the opportunity to make money to help their families back home. Almost all it, they say, was a lie.

“I can’t even think how can someone do all this stuff to someone else,” Dominguez said in Spanish. “It’s like I walked into the worst situation of my life.”

Both Velasquez, 18, and Dominguez, 19, said they learned about the Phoenix-based basketball academy Elite 1 from a friend, Carlos Montilla, another Venezuelan who already was in Arizona playing for the academy’s team.

It was a chance they didn’t have at home in Venezuela, a country in economic turmoil. After talking to Elite 1 officials, Velasquez bought a ticket to Phoenix and arrived in June last year. Dominguez flew to Arizona one month later. Both were offered spots on the team.

They said everything went well at first, they were playing club basketball and competing against other teams. They were enrolled in school and living in a house in Surprise with other players and a trainer.

But after a few months, Velasquez said the players were poorly fed and living in a house with 20 other people. New trainers constantly rotated through the house, one of whom Velasquez said had been in jail and brought drugs into the house.

“They would cook for us, but at that point, there were a lot of people, about 20 players in the house, and for the type of training they would give us, it wasn’t sufficient food,” Velasquez said in Spanish. “This wasn’t the trainer’s fault … the lady, Tamica, would only sometimes give him money for food.”

Elite 1 Academy, which has been operating in the Valley since at least 2014, is owned by the Wayne Foundation, an Arizona-based nonprofit, according to the Arizona Corporation Commission website.

Its president, Tamica Goree, 45, was arrested in September in an unrelated case, charged with fraud for allegedly altering vehicle titles to obtain loans from banks and other institutions, according to the Arizona Department of Transportation and Maricopa County court records. Goree pled not guilty to the charges and was released on a $25,000 bond, pending trial.

Earlier this year, Goree divorced her husband and married Montilla, the Elite 1 player who first told Velasquez and Dominguez about the academy. Their Las Vegas marriage license shows Montilla was 17 years old at the time.

Today, Velazquez and Dominguez are living with Valley families and finishing high school. The Elite 1 Academy website was taken down as Cronkite News reported on this story.

Elite 1 Academy was one of many basketball academies in the United States that train and prepare athletes, including international students, for college or professional basketball careers. Velasquez said Elite 1 players attended various schools around the Valley, including Faith Christian in Mesa and Ombudsman in Peoria, but practiced and played basketball with the Elite 1 team.

Faith Christian School administrator Dick Buckingham said in an email the school was never in partnership with Goree or Elite 1, but did educate several international students from the program that met the visa requirements between 2015 and 2017.

He said they stopped accepting new students from Elite 1 because of lack of cooperation with Goree, and the school was left with a “sizeable debt due to unpaid tuition payments” for her players.

“These students have been removed from her care by the Arizona Department of Child Services. The school has worked with this department as well as other law enforcement agencies and SEVIS (U.S. Immigration and Customs Enforcement’s Student and Exchange Visitor Information System) to assist in their investigation of alleged mistreatment of the students under Ms. Goree’s care,” Buckingham said.

A spokesperson for the U.S. Department of Homeland Security said aspects of the program are under investigation, but could not provide details.

“I will have to decline the interview (for now) but that’s only because this is an ongoing case with HSI (Homeland Security Investigations),” she said.

Darren DaRonco, a spokesperson for DCS said, “We cannot comment due to confidentiality laws.”

Binky Michelle Jones, regional vice president for Ombudsman Charter Schools, said the school had no relationship with Elite 1 Academy, but they “heard reports about the living conditions of their students that are associated with Elite 1.” She said they were checking on students’ well-being and connecting them with social services.

Goree has other business interests in Arizona. She is listed with the Arizona Corporation Commission as an agent for at least six other companies, including STG Industrial Maintenance, L.L.C. The company was named in multiple lawsuits starting in 2010, when STG was sued for breach of contract, breach of guaranty and fraud. 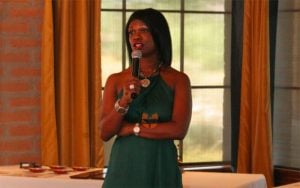 Court documents show Goree was named in several judgements ordering STG to pay nearly $1 million in restitution. She and her former husband filed for bankruptcy in 2010.

When contacted by Cronkite News, Goree, who said she played college basketball for Indiana University, said she was director of operations for Elite 1 Academy, but said coaches and trainers were responsible for players’ care. After a few minutes on the phone, she said she had to hang up, but agreed to speak later in the week.

Instead, Cronkite News received an email Thursday afternoon in which she wrote “I am currently traveling and not sure what your aim or purpose is in trying to spread stories or rumors that are not true and also without knowing the causes and meaning behind certain things.”

Cronkite News reached out to two former Elite 1 coaches for comment via email, neither responded.

On its website, the Wayne Foundation, which owns Elite 1, describes its student refugee program as an opportunity for players from “3rd world countries” to receive scholarships, attend school and compete in athletics with the help of donations and grants. It lists Phoenix Suns and NBA Cares as partners.

NBA Cares told Cronkite News it has “no partnership or relationship with either organization and are working to address the situation as soon as possible.”

A Phoenix Suns spokesperson said the organization has no association with the Wayne Foundation and is working to be removed from their website. 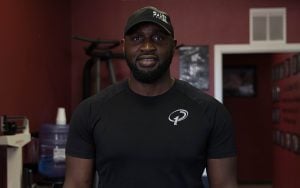 Dominguez said he was forced to play even though he had a stress fracture in his leg and his doctor had recommended he take several months off to recover. At a tournament near Las Vegas in late 2016, he landed hard on his other leg, and fractured it as well.

Goree told him if he couldn’t play, he would have to find somewhere else to go, Dominguez said. In January, she kicked him out.

“She told me, ‘I can’t have you here anymore because you can’t play, you can’t do anything, you’re not useful,'” he said. “On my birthday, she dropped me off at the airport with no money, and nowhere to go.”

Velasquez said when a trainer started doing drugs with other players, it was “the last straw.”

“The players that went to school with me, we all ended up talking to the principal, who speaks Spanish and was very good to us,” he said. “I told her about the situation at home. Eventually … our trainer was kicked out.”

Soon after, Velasquez said the team was playing a tournament in California. On the way back to Arizona, he said Goree stopped the bus and told him he had two days to find a new place to live.

The Homeless Youth Connection, a local nonprofit that helps homeless students, assisted both Velasquez and Dominguez when they found themselves with nowhere to stay. A spokesperson for the organization said she was unable to comment due to confidentiality but said in an emailed statement they were “thankful for the opportunity to serve students in these situations.”

A timeline of the important events regarding the Goree allegations.

Wayne Dawkins is the owner of P.H.A.S.E 1 athletics in Mesa and co-founder of Grassroots Canada Elite, a program credited with contributing to the careers of NBA players such as Tristan Thompson of the Cleveland Cavaliers.

“You look at our history and our alumni and who had passed through, NBA players, WNBA players, scholarship athletes. If you can piggyback off it, it would be great,” he said. “I believe she saw that as a great opportunity.”

Five years ago, Dawkins said he was approached about bringing his P.H.A.S.E 1 program to Arizona. International athletes need visas to play in the U.S., which Dawkins said can be complicated, but by August 2013, P.H.A.S.E 1 academy was up and running.

Soon after, Dawkins said he was approached by Goree and a man she identified as former Phoenix Suns basketball player Richard Dumas about partnering with their organization, Dumas Association. Dumas Association changed its name to Wayne Foundation in 2014.

“She had a big house in Goodyear and she had the Bentley and the Range Rover and she really made it look like she had the finances to do all these credible things,” Dawkins said.

Dawkins said he considered the offer, but after looking into both Goree and Dumas, and learning about pending charges against Dumas for theft and burglary, he decided against the partnership.

Later, Dawkins said he learned Goree and some of his coaches recruited some of his P.H.A.S.E 1 players and started a new academy — Elite 1. He said Goree continued to bring players into the U.S. on visas under the P.H.A.S.E 1 name, even the players who were no longer associated with P.H.A.S.E 1.

“The kids would come in and then just stay and not leave and then start going to school so they are here illegally. I think they thought they were okay,” he said. “How many people really understand the immigration stuff? Very few.”

Dawkins now runs his Mesa-based company P.H.A.S.E 1 Athletics with a focus on fitness and athlete training, rather than just basketball.

“At the youth level, it can be a really bad culture on so many different levels, in so many ways,” he said. “For me, I realize that it’s easy to either get drawn into it or be guilty by association.”

Dominguez still is recovering from his leg injuries. Both he and Velasquez are living with local families while they finish high school, and say they are determined to be successful so they can help their families in Venezuela.

Venezuela is in economic crisis because of the declining price of oil, its main export and source of income. The inflation rate has risen more than 650 percent this year and the unemployment rate was more than 26 percent as of October, according to data from the International Monetary Fund.

“I was already coming from a tough situation in my country,” Velasquez said. “It was very similar to what was happening to me here. I came here wanting to improve and overcome every day, so I already had an experience of what that was all like.”