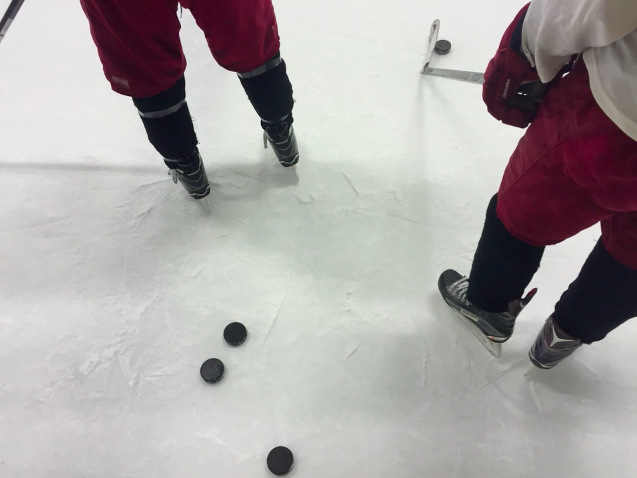 An Arizona Bobcats youth ice hockey team plays the Jr. Coyotes at Arcadia Ice Arena in Phoenix. The Bobcats program is the only one of six youth programs in the Phoenix area to implement a sideline baseline concussion test. (Photo by Eddie Poe/Cronkite News)

“I knew something was wrong,” said his mother, Jodie Wilson, a day after her son was sidelined because of an injury. “He was complaining of a headache and was showing light sensitivity.”

The mother of a 12-year-old son in the Arizona Bobcats youth hockey program, Wilson was unsure of the next step to be taken to diagnose her son.

A registered nurse in the intensive care unit at Mayo Clinic in Scottsdale, Wilson reached out to a colleague by email the following day. After an appointment was promptly set up with a doctor, the first question Wilson was asked left her puzzled.

Did he have a baseline concussion test?

In no time, her son was diagnosed with a concussion and spent the following six weeks recovering before all symptoms had subsided.

Before her son’s concussion, the Bobcats program lacked a policy and had nothing in place to baseline test players — prompting Wilson to take preventive measures into her own hands.

As concussions have become a hotbed of discussion in sports in recent years, from football to ice hockey, as well as soccer and cheerleading, concerns continue to be raised in youth leagues around the country.

According to a recent study published by the American Academy of Neurology in Minnesota, ice hockey players in their early teens who have suffered a concussion may still have brain changes three months later, long after other symptoms have cleared and allowed players to return to the ice.

But even though concerns in recent years have led to reforms by Arizona youth leagues, the question remains: Are enough measures being taken to best protect players?

“There’s plenty of evidence and it’s well established now that hockey players and football players who take repeated hits to the head, even at the youth level — their brains are functionally changed,” said Dr. David Dodick, a neurologist with Mayo Clinic in Scottsdale.

Following the aftermath of her son’s injury, Wilson made it a goal to soundly address the issue within the Bobcats program.

“I reached out to USA Hockey during the summer following Sheldon’s injury and began working with them on how to develop a program,” she said. “I wrote a policy and developed an acknowledgement letter for parents stating that their child would need to be mandatory baseline tested through the use of a computerized cognitive assessment tool, impact tool, and a baseline King-Devick Test.”

As of this season, all NHL teams have implemented the King-Devick Test, helping to further combat the issue of concussions suffered on the ice.

After extensive work with USA Hockey, Wilson was able to implement formalized testing for the Bobcats program this season and parents have become aware of its requirement for their children.

“It’s about education and making sure that the effort is put forth and that the safety precautions are there for youth because there’s so much lack of education amongst parents,” said Wilson, who is now the concussion coordinator for the Bobcats program. “Most still think that if they have a concussion, they should stick [them] in a dark room and the evidence doesn’t support that.

“It sometimes makes it a challenge to update parents with information that the evidence does support.”

In July, after partnering with Mayo Clinic, Wilson arranged an open house on how to use the King-Devick Test. By August, training sessions had been set up and team managers were taught how to use the test kits.

“It was an undertaking,” she said. “But I know that it’s paid off.”

Where youth leagues such as those in Arizona fall short is through the providing of access to healthcare providers and in ensuring that league cultures are positive towards concussion reporting.

According to recent studies, it’s likely that a number of concussions occur throughout the season and go undetected.

“There’s some evidence that up to 50-60 percent of concussions go undetected,” Dodick said. “Either because the athlete conceals the symptoms and doesn’t report them, the athlete has symptoms but doesn’t even recognize that they’re due to concussion, or the athlete truly doesn’t have symptoms but there’s been a concussive brain injury.”

At Mayo Clinic, a sideline protocol has been established that is gradually being implemented in youth hockey and football leagues around the Valley. It consists of the Standardized Assessment of Concussion, King-Devick Test, and the Timed Tandem Gait Test.

Neurologists and doctors at Mayo like Dodick have been working to implement the battery of tests across the Valley in as many youth leagues as possible.

Pushback from leagues and a lack of action have created a cause for concern.

“Why shouldn’t this be a part of a preseason physical examination?,” Dodick asked. “Particularly children who are involved in contact sports, or sports where concussion risks are highest — football, hockey, soccer, even cheerleading — I’ve said it for a long time that it should be a part of every preseason examination.”

Even though some leagues recommend taking a baseline concussion test prior to the season, it’s often not made mandatory. This then creates a new set of problems once a concussion is suspected.

Leagues have made it mandatory for coaches and parents to be trained to assess players and be able to remove them from play. But further measures have failed to take place.

“One of the most important things youth leagues can do is provide access to a qualified medical provider to assist with the diagnosis and return-to-activity decisions following concussion,” said Tamara McLeod, co-author of the National Athletic Trainers’ Association position statement on management of sport concussions and director of athletic training programs at A.T. Still University in Mesa.

“This may include a licensed athletic trainer or other health care provider as designated by that state’s concussion law. Athletes should be monitored and follow an appropriate return to play progression.”

Even though the prospect of hiring an on-site medical professional may be impractical for most youth sports leagues due to their nonprofit status, Wilson acknowledges that the strides being taken have helped immensely.

It’s given parents of children in youth programs the knowledge they require and a structure that is focused solely on informing.

“It’s kind’ve been a hindsight 20/20 type of situation,” Wilson said. “A situation of ‘oh my God, I wish we would’ve had these policies in place five to seven years ago.’ I think the awareness and the knowledge of what we’re handing over to parents is really changing things.”

But for Wilson, it’s become evident that even without youth suffering concussions, more measures need to be taken in the form of parent involvement and self-education.

“Unfortunately, it takes people like myself to dive in and say, ‘hey we need to do something,”’ she said. “This is what is important for youth and [we’re] finding out more and more information as more studies are coming out.

“Yeah you heard of it before but it wasn’t as big of a deal. The mentality has changed and the pendulum has shifted.”

One of the most important things youth leagues can do is have policies in place for emergency action plans, concussions and other health and safety issues.

And while the findings of studies continue to show that there are physiological variables that have not seemed to recover when clinical measures have suggested the resolution of symptoms and cognitive deficits, further measures can be taken.

“I think there should be a removal of physical body contact in certain sports until youth are of a certain age,” Dodick said. “Especially for youth whose necks are not equipped to sustain a blow and whose brains are developing and recover much slowly from an injury, if they recover completely at all.”

Aware of the risk of concussion, USA Hockey in Arizona raised the age of allowance for body checking from 11 years old to 13 years old in recent years.

The change has created a more positive and prolonged effect that places an emphasis on the interests of youth long after they step off the ice.

“A recent study showed that below the age of 12, if you expose children to head contact in either football or hockey, you increase the risk of neuropsychiatric impairment later on in life,” Dodick said. “So, removing that very vulnerable period of exposure before the age of 12 will go a long way in reducing the cumulative long-term effects that those individuals may suffer down the road as adults.”

For parents like Wilson, she fully understands that the issue of concussions is one that’s still in the early stages. But that it’s also an issue parents and coaches should respond to with appropriate and responsible action.

“I don’t think we have enough evidence out there yet to support taking more measures in terms of preventing further concussion injuries, but I think it’s coming,” she said. “Hence the reason why all of (these) neurologists and doctors are taking a stand to say, ‘Hey, we need to do more of we may have to do more diagnostic testing.’ ”

“I think more and more is going to happen and I think right now, we’re right at the cusp.”