PHOENIX — When there’s an emergency, the first rule is to call 911.

But St. Luke’s Emergency Department director Elizabeth Waack said it is also critical to use those minutes before help arrives to give assistance.

“The time it takes for EMS and that help to arrive could be one, three, five, or even longer minutes because of where the location is,” Waack said. 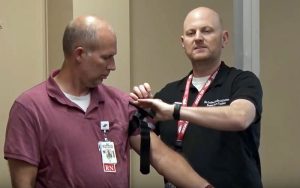 Geoffrey Ballentine said the best way to apply a tourniquet is “high and tight” rather than right above a victim’s wounds. (Photo by Drew Marine/Cronkite News)

Which is why St. Luke’s Medical Center is offering “Stop the Bleed” classes to teach the public how to apply a tourniquet, pack an open wound with gauze and how to properly deliver cardiopulmonary resuscitation. It only takes five minutes for someone to bleed out, said class instructor Geoffrey Ballentine. The classes were inspired by the “Stop the Bleed” campaign launched by President Barack Obama and the White House in 2015.

Ballentine said the most important aspect of applying a tourniquet is getting it “high and tight.” He demonstrated to the class how to place a velcro strap around a person’s arm and use a rod to tighten it until the bleeding stops.

Ballentine also talked to the class about treating more complicated wounds, such as those at junction areas around the groin or the armpit.

Once the bleeding has stopped, other emergency procedures like CPR should be applied, he said. 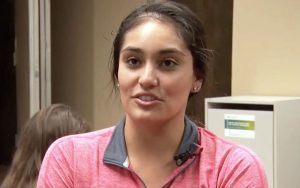 Taylor Blair said because of recent mass casualty disasters like the Las Vegas shooting and Hurricane Maria, everyone should know how to apply these skills. (Photo by Drew Marine/Cronkite News)

“You already controlled the bleeding, but now you need to circulate the oxygen in the blood to those vital organs, especially the brain,” Waack told the class. “The goal is 100 compressions per minute and you just keep going fast and hard and good, quality compressions will save someone’s life.”

To make sure you’re hitting 100 compressions a minute, Waack suggested delivering CPR to the beat of the song “Stayin’ Alive” by the Bee Gees.

Class attendee Taylor Blair said the skills are essential, especially in light of recent mass casualty disasters, such as the Las Vegas shooting and Hurricane Maria.

“I just think it’s important for anyone to know in case that kind of situation comes up, I can definitely show others, for sure,” Blair said. “I’m going to try and share that with my family, maybe a couple friends and spread the word a little bit.”

The next “Stop the Bleed” class will be on Jan. 19 when St. Luke’s expects its new education center to be open.