“A lot of companies give out a handbook on the first day and never talk about it again, or you really only hear about it when you’re in trouble,” said Teresa Marzolph, the founder of Culture Engineered, a human capital consulting firm in Phoenix. “That should be something that should be accessible all the time and should be frequently revisited.”

Accounts and allegations of sexual harassment and assault have hit a variety of industries — such as the movie industry, with Harvey Weinstein and Kevin Spacey, to comedy with Louis C.K., to the media with Charlie Rose, and to political figures like Roy Moore and Al Franken. The social media #MeToo movement has brought forth a multitude of accounts, and the data says sexual harassment in the workplace has been a consistent issue for decades.

“It’s so absurd that we’re even having to talk about this, but things like this are helpful, and it makes it much more real,” said Eric Knott, the incoming president of the Phoenix-area chapter of the Society for Human Resource Management. “In HR departments all over the country, conversations are being had with the business, looking at formal training for employees because of all of this.”

“It shouldn’t be a ‘check the list’ or awful trainings we’ve all seen that are very bland and boring, it should be something relatable and should be something that sparks conversations in the workplace because that’s the only way these types of things get attention.”

“There’s always been, unfortunately, a steady stream of sexual harassment claims,” said Pavneet Uppal, a partner with Fisher & Phillips LLP. “As these issues are more front and center in the media, there will be a tailwind of these types of claims. However, it’s not brand new.”

Nathaniel Hill, a senior associate at JacksonWhite, Attorneys at Law, said he believes the national attention on these allegations has created a “zeitgeist” – the general moral and cultural climate of an era – of sexual harassment. 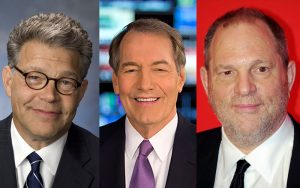 Accounts and allegations of sexual harassment and assault have hit a number of high-profile members in a variety of industries. (Photo illustration)

“We live in a society where we don’t have time machines. We can’t go back and fix it all,” Hill said. “(Companies are) aware that it’s happening, and employers will always want to work on a resolution because of their (public) perception.”

Like Hill, Knott believes the issue with sexual harassment lies in the hands of the businesses caring about the prosperity of the company.

“This isn’t necessarily an issue of incompetent HR,” Knott said. “HR folks have this, it’s a matter about how we can get the business to understand the severity of sexual harassment.”

Arizona state law does not require training regarding an employer’s policy on sexual harassment, and Knott believes government intervention on this issue is not the solution.

“The government requiring something doesn’t make it go away,” Knott said. “The law is very clear, but we still, after 60 years almost, are suing each other over (Title VII – discrimination based on sex, race, religion or national origin). It’s because there are all of these granular little details that are covered by the law, and it’s those lawsuits, those individual decisions.”

“Overall, (the charges) have been very consistent, unfortunately,” said Joseph Olivares, a spokesman for the EEOC. “Even looking back, it is only fluctuating by hundreds of charges (nationally).”

“We need to stop all forms of harassment, but we probably can never eradicate it,” said Kraig Marton, an employment attorney at Jaburg Wilk, P.C. “I see employees with employment problems almost every day. It does seem that when a lot of publicity is given to such matters, such as lately, then there is an uptick in the number of complaints.”

However, according to the EEOC, the number of sexual harassment charges filed nationally has slightly decreased each year.

“Time will tell, we’ll be able to look back and see if there was an upward shift (in cases),” Hill said. “We are only a month into this movement.”