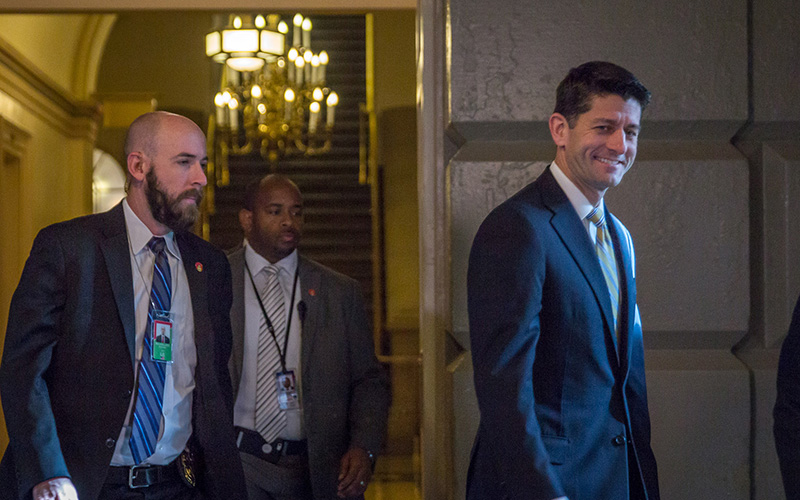 House Speaker Paul Ryan prepares to meet with GOP lawmakers before they voted to pass a sweeping overhaul of the tax code, an action Ryan had promised by Thanksgiving. (Photo by Adrienne St. Clair/Cronkite News) 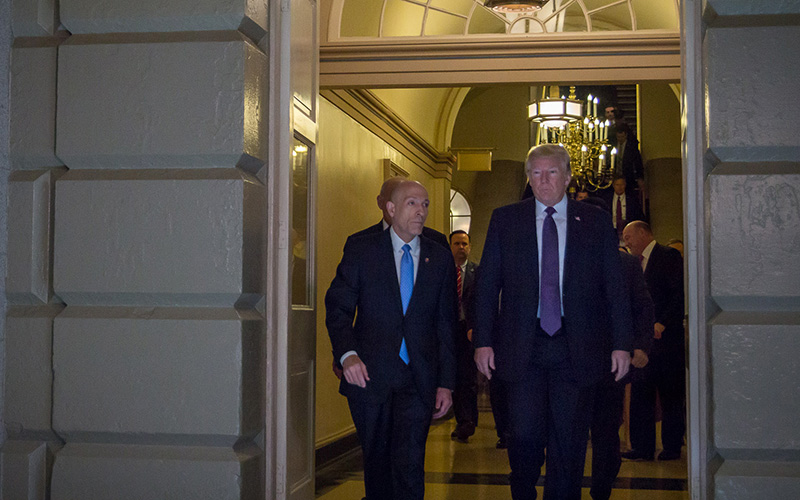 President Donald Trump arrives at the Capitol to meet with House Republicans before the Tax Cuts and Jobs Act vote. He said after the meeting that “taxes are going really well.” (Photo by Adrienne St. Clair/Cronkite News)

WASHINGTON – Arizona lawmakers fell in line with their respective parties Thursday as the House voted 227-205 for a $1.5 trillion tax-cut plan, making good on Speaker Paul Ryan’s promise to get a bill passed before the Thanksgiving recess.

Thirteen Republicans joined all 192 voting Democrats to oppose the Tax Cuts and Jobs Act, but no Arizona lawmakers crossed party lines on the vote.

The vote followed two weeks of heated debate about whether or not the tax reform proposal would truly lower taxes for middle and working class families and encourage economic growth.

Many Republicans were like Rep. Trent Franks, R-Glendale, who said after Thursday’s vote that the bill is a “truly historic tax reform that will catalyze resurgence in the economy.”

As Ryan finished speaking on the House floor before voting began, he got a standing ovation from Republican lawmakers who cheered and whooped – and who erupted again in another round of cheers when the final 227-205 vote was posted.

The Tax Cuts and Jobs Act decreases the number of individual tax brackets from seven to four, doubles the standard deduction, cuts the corporate tax rate from 35 percent to 20 percent and proposes major changes to deductions like the state and local tax deduction, among other changes. These changes fulfill the two basic requirements of tax reform set out by the GOP – that “ordinary Americans pay less and pay easier” and that the corporate tax rate comes down, said Office of Management and Budget Director Mick Mulvaney in a White House briefing for reporters Tuesday.

Mulvaney, a founding member of the House Freedom Caucus when he was in Congress, downplayed concerns that caucus members – including many in Arizona’s delegation – and Republicans in general might balk at the potential that the cuts would make the already-steep budget deficit even worse. He said they understand that when it is impossible to “cut your way to balance, or to surplus … the only way to solve that problem is to raise the revenue” by stimulating the economy.

House GOP leaders said the bill will do just that. And Adam Michel, policy analyst at the Heritage Foundation, agreed, saying that in addition to the cuts in the tax reform bill, “there’s this whole other part, and that is the economic growth part.”

Michel said past cuts and efforts for tax reform have not produced the type of economic expansion that the Tax Cuts and Jobs Act aims for because “not all tax cuts create economic growth.” He said that corporate and other tax cuts will lead to benefits like large wage increases, among other things, and that “the tax cuts are just the icing on the cake.”

Rep. Martha McSally, R-Tucson, in a statement after Thursday’s vote called the bill “the once-in-a-generation opportunity for Washington to fix this broken tax code.” Rep. Andy Biggs, R-Gilbert, said in a statement that the bill “provides tax relief from burdensome taxes for most Americans” and that reform will ultimately bring “economic prosperity for us, our children and our grandchildren.”

But Democrats said the tax cuts’ biggest beneficiaries will be those who need it least.

“Simply put: This bill is a transfer of money to the rich from the rest of us,” said Rep. Raul Grijalva, D-Tucson, who said Medicare will suffer a cut of $25 billion under the plan.

“This bill may just be the ultimate American betrayal,” Grijalva said.

The Republican push for tax reform still has to get through the Senate, where the Finance Committee began consideration of its own version of a tax reform bill this week.

The Senate bill, also called the Tax Cuts and Jobs Act, differs from the House version in the details. Both bills nearly double the standard deduction, from $6,350 to $12,000 for single filers and from $12,700 to $24,000 for married filers, and both slash the corporate tax rate to 20 percent.

But while the House bill would raise the current Child Tax Credit from $1,000 to $1,600, the Senate would double the credit, according to a Heritage Foundation analysis.

Other differences with the Senate tax bill include complete repeal of the state and local tax (SALT) deduction that the House bill modifies; retention of seven tax brackets, but at lower rates; and a repeal of the individual mandate for healthcare, which is a key piece of Obamacare.

Mulvaney said the administration is not worried about overcoming differences between the two chambers.

McSally said in her statement that she supports the tax bill because “Arizonan families deserve a healthy economy and bigger paychecks.”

Franks said he believes the bill will “ultimately strengthen the country’s ability to be a force for good and freedom in the world.” And he’s optimistic that the legislation will end up on President Donald Trump’s desk.

Trump, who met with Republican lawmakers before Thursday’s vote, has urged Congress to get him a bill by Christmas. He told reporters after meeting with House members that “taxes are going really well.”