Local Latino veterans come together to share art, hope to leave legacy of their service

PHOENIX – Memories of the battlefield were brought back to life at “Los Veteranos De Arizona” art exhibit.

Those behind the show said the idea behind it is to serve as a platform for local Latino veterans to come together and share their stories of war through art.

In honor of Veterans Day, The Sagrado Galleria, an art gallery located in South Phoenix, hosted the event. 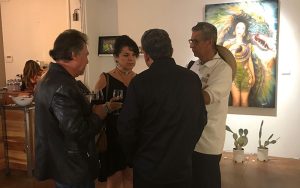 In an area where art is rare, visitors were shown war-battles, brotherhood and history through the eyes of the men and women who were called to live a life of service.

Jim Covarrubias is a Vietnam veteran and an organizer of the showcase.

Through the art he created, Covarrubias wanted to share the important role Latino service members have had through the years in the military.

“We are proud to be veterans and be part of the history. But we want respect,” Covarrubias said.

Respect and honor were components weaved in and out of the art pieces being shown at “Los Veteranos de Arizona.” 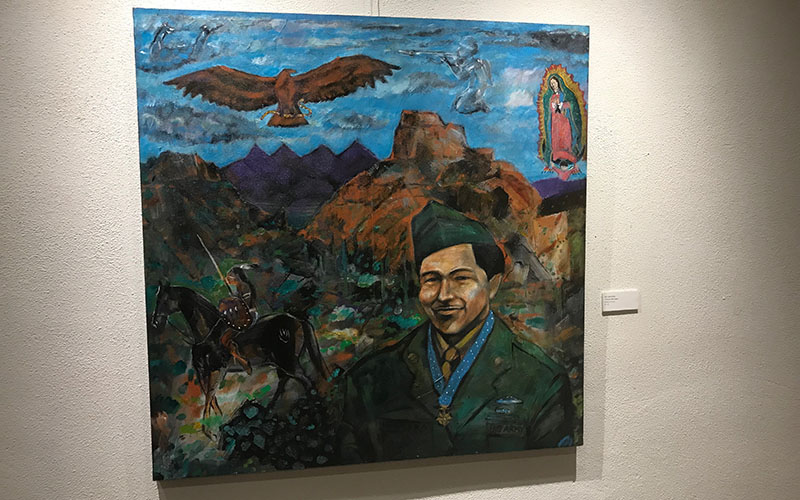 A painting by Jim Covarrubias show at “Los Veteranos de Arizona,” shows his memeory of Latino culture within the military. (Photo By Alex Valdez/Cronkite News)

The artists said this was a way for them to share with the South Phoenix community a piece of the battlefield they feel is often forgotten.

Jose Andres Giron is also a veteran and another organizer of “Los Veteranos de Arizona.”

Giron said showing younger generations this part of Hispanic history is the reason why he dedicates himself to creating Latino art in different ways.

A ‘Making Action Possible for Southern Arizona’ study shows there are currently 500,000 veterans living in Arizona. Hispanics make up 10.6 percent of that population compared to the national average of 5.6 percent. 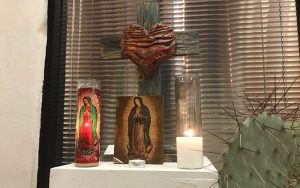 The depiction of the Virgin Mary appearing to Saint Juan Diego is very important to the Latino culture. Many of the veterans carried prayer cards to keep their faith close. (Photo by Alex Valdez/Cronkite News)

Covarrubias said the contributions of these Hispanic veterans didn’t stop when their active service ended.

“What did they do when they got out? Did they turn anti-American? No,” he said.

One thing these veterans all said they agree on is the color of your skin or where you are from does not matter on the battlefield.

“During combat, it does not matter if you are black, white, purple, we are brothers,” Giron said.

“Los Veteranos de Arizona” exhibit will remain open to the public at the Sagrado Galleria through Nov. 29.