Despite slowing, foreign student numbers in US, Arizona inched up 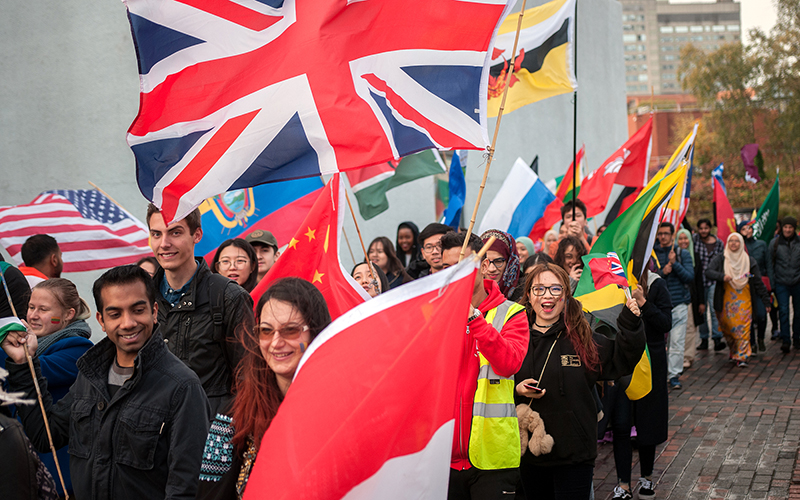 After years of sharp increases, the number of international students enrolled in U.S. colleges has started to level off, a trend seen in Arizona. Experts blame rising costs, U.S. politics and more competition from countries like the U.K., where students shown here are studying. (Photo by Tim Dennell/Creative Commons)

WASHINGTON – A report Monday revealed for the first time “a very real drop” in new enrollment by international students in U.S. colleges and universities in 2016-2017.

New enrollment for international students for the 2016-2017 academic year was about 290,000, lower than the past two years, and the first drop in at least the past 10 years.

Despite the decline in new enrollments, however, overall enrollment inched up last year to reach a new high of 1.08 million international students in the U.S., an increase of about 3.3 percent from the prior year.

That trend was echoed in Arizona. The state’s three public universities saw an increase of 387 international students last year – to 19,382 students – a 2 percent growth rate that was down sharply from double-digit percentage growth in recent years, according to numbers provided by IIE.

Numbers of new enrollees in Arizona schools were not immediately available.

The annual Open Doors report by the Institute of International Education has shown enrollment growth of 7 to 10 percent nationally every year since at least 2000, but the latest report said the number of new students fell 3 percent last year from the year before.

Experts said the general “flattening” of foreign enrollment could be the result of a number of factors, including higher costs for education, greater competition from schools in other countries and concern about how welcoming the U.S. might be to foreigners after the heated rhetoric of last year’s presidential campaign.

Many institutions are “working very hard to reassure” students looking to come to the U.S. that they “continue to be welcome,” said Rajika Bhandari, director at the Institute of International Education. They have worked to encourage “open and honest discussions” about student concerns, she said last week, and to better alert students to changes in U.S. policies.

Despite those concerns, the U.S. is still far and away the largest host of foreign students in the world, with the 1.08 million enrolled here more than twice the number in the next-closest country, the United Kingdom.

“The U.S. still holds the largest number of international students in the world,” Bhandari said.

ASU’s Tempe campus had the largest contingent of international students among public universities in the nation, with its 13,164 foreign students trailing only New York University, University of Southern California, Columbia University and Northeastern University, all private schools.

ASU, “truly a global university,” has had a “nearly 200 percent increase international enrollment in the last 10 years,” university spokesman Bret Hovell said in an email Friday.

International students at the University of Arizona were down fron 4,956 to 4,881 last year, according to data from IIE, while Northern Arizona University saw its numbers rise from 1,278 to 1,337.

Bhandari said it’s “too early to tell” if last year’s drop in new enrollments is the beginning of a trend, but she said colleges and universities are taking it seriously.

“Institutions are really ramping up their outreach” to prospective students from abroad, who Bhandari said now have many options to choose from. The rising cost of American higher education is also helping Britain, China, Australia and Canada become “key host countries” in the growing competition to attract international students.

Besides having a direct economic impact, international students also feed a global competition by businesses for talent, IIE President and CEO Allan E. Goodman said in an e-mailed statement.

“Countries and multinational employers around the world are competing to attract top talent,” Goodman said. “As more countries become active hosts of international students and implement national strategies to attract them, the competition for top global talent in higher education and the workforce will only intensify.”

But the direct economic impact can be sizeable.

International students have brought ever-increasing amounts of money to the economy, contributing $36.9 billion and supporting “more than 450,000 jobs to the U.S. economy,” according to NAFSA’s report on IIE’s Monday release. The estimated $686 million they added to the Arizona economy was three times the amount of 10 years before, NAFSA estimated.

Despite the downturn, Goodman is still optimistic, but said schools here can’t let down their guard.

“Students continue to be attracted to the high-quality and diverse opportunities offered by U.S. colleges and universities,” he said. “It will be critical for U.S. institutions to set strategic goals and be proactive in reaching out to students and families in a wide range of countries in the coming year, and for the United States to keep its academic doors open to students from all over the world.”