Many of the more than 1,000 protesters who showed up for Thursday’s events in Washington were DACA recipients or their friends or family, including dozens who came from Arizona. (Photo by Andrew Nicla/Cronkite News) 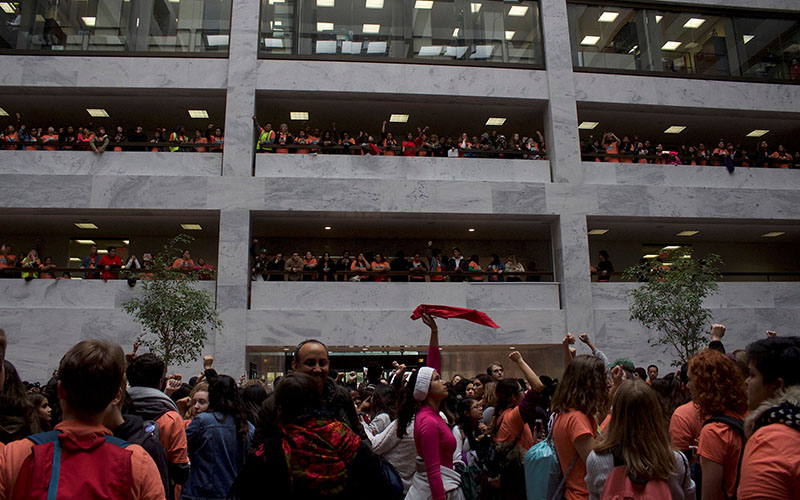 Protesters calling for a vote on a “clean” Dream Act packed the atrium of the Hart Senate Office Building and lined the balconies while curious staffers looked out office windows at the protect. (Photo by Andrew Nicla/Cronkite News)

U.S. Capitol Police arrested 15 protesters for obstruction and other charges at the peaceful, but noisy, rally Thursday by more than 1,000 people demanding that Congress act to protect DACA recipients. (Photo by Andrew Nicla/Cronkite News) 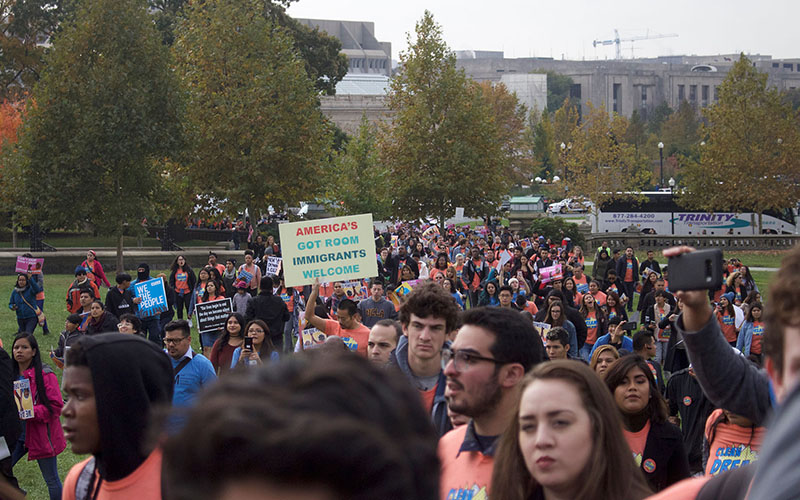 Organizers said they had 1,000 T-shirts to hand out to protesters, but soon ran out as they were overwhelmed by the number of people who turned out for the rally in support of the Dream Act. (Photo by Andrew Nicla/Cronkite News) 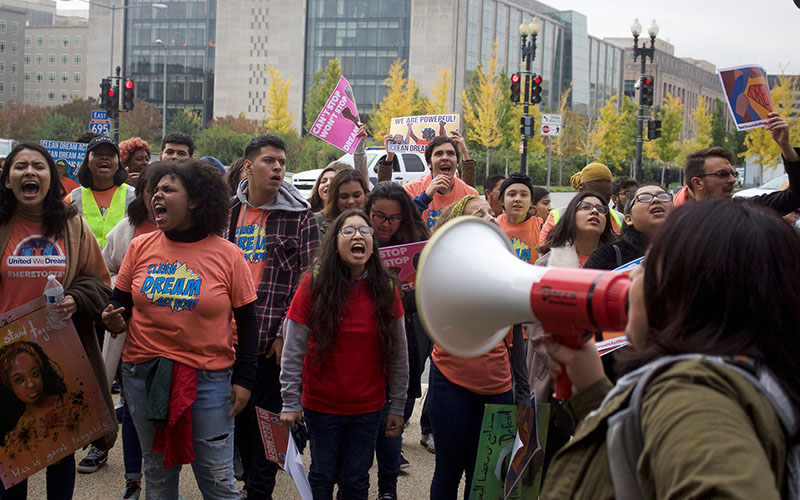 After rallying in the Hart Senate Office Bulding, protesters marched across the Capitol grounds and gathered on the West Front of the Capitol, where they continued their rally in support of DACA. (Photo by Andrew Nicla/Cronkite News)

WASHINGTON – Hundreds of protesters packed the lobby of a Senate office building Thursday, their chants echoing off the marble walls as they demanded that Congress vote to protect DACA recipients.

Fifteen were arrested, including one protester from Arizona who later said on social media that she was willing to risk arrest in order to “speak out for justice for all undocumented people.”

But while the protesters called for Congress to vote by early December on a “clean” Dream Act, with no other provisions attached, a group of Republican House members was calling for both sides to compromise on a bill to protect DACA recipients.

“We reject the all-or-none approach,” said Rep. Carlos Curbelo, R-Florida. “We think there is a compromise out there that can seek the future for all of these wonderful young people and that can also keep our country safe.”

Curbelo was one of about a dozen Republicans who said that settling the DACA question is not a partisan, but a “human issue.” They said compromise is the better path to protecting DACA recipients, who should be dealt with compassionately and whose pending status should not become a “political football.”

Their pending status was thrown into doubt on Sept. 5, when Attorney General Jeff Sessions announced that the Trump administration would phase out the Deferred Action for Childhood Arrivals program that had been a hallmark of the Obama administration.

President Barack Obama established DACA by executive order in 2012, after Congress stalled on efforts to pass comprehensive immigration reform. Under the program, anyone who was brought to this country illegally as a child could apply to have their deportation delayed for two years, during which time they could get approval to hold a job and go to school.

Supporters said it is wrong to deport someone to a country they may never have known and for whom the U.S. has always been home. But critics, including Sessions, called DACA an example of executive overreach on a decision that should have been left to Congress.

Sessions said the Department of Homeland Security would no longer renew DACA protection after March 5, after which recipients could be subject to deportation. The six-month phase-out of the program was designed to give Congress time to come up with a solution.

Despite proposals in the House and Senate that could keep DACA in place, however, Congress is no closer to a vote. And some Republicans, including President Donald Trump, have suggested that a DACA replacemtn will need to include other elements, such as funding for a border wall or greater immigration enforcement in the interior.

But protesters Thursday demanded a vote on a “clean” Dream Act – which would put into law many of the policies of DACA, along with a possible pathway to citizenship – and they want it by Dec. 8, when the federal budget will be up for a critical vote.

“These are people’s lives,” said Karina Ruiz, president of the Arizona Dream Act Coalition. It was one of three Arizona groups to bring dozens of protesters to the Capitol to protest. 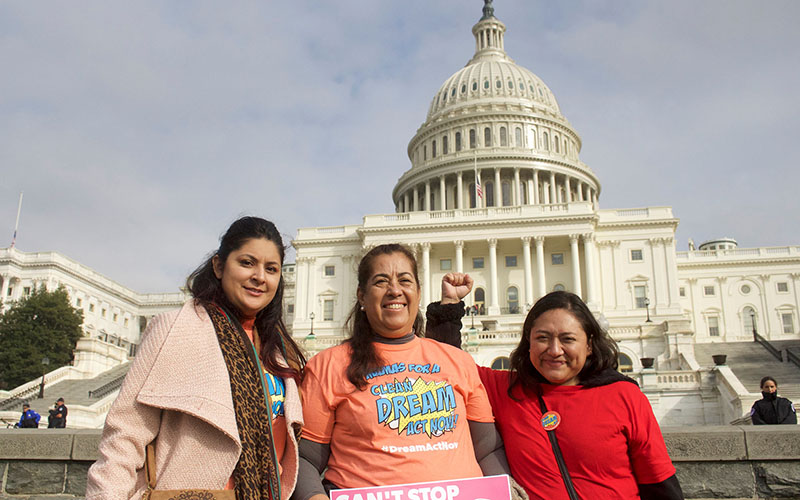 Hayddy Pinedo, Rosa Maria Soto and Karina Ruiz, from left, came from Phoenix to Washington to meet with Arizona lawmakers and advocate for the Dream Act on behalf of the Arizona Dream Act Coalition. (Photo by Andrew Nicla/Cronkite News)

“These are young students that will lose an ability to pay in-state tuition, that have drivers licenses in Arizona especially,” Ruiz said. “Or they’re people like me who could lose their jobs that are older dreamers.”

Protest organizers said they brought 1,000 bright-orange T-shirts demanding a “clean Dream Act Now!” but said they quickly ran out of shirts for a crowd they estimated to be about 1,200.

Protesters filled the atrium of the Hart Senate Office Building with a sea of orange shirts, with hundreds more lining several floors of balconies that ring the space. There were no speakers, but the crowd chanted and clapped, creating a deafening din in the marble-clad space.

During the event, several protesters sat on the floor, linking arms and chanting. U.S. Capitol Police arrested 15 of them for obstruction and other charges, as the rest of the crowd began to file out.

Belen Sisa, an Arizona State University student and DACA recipient who was among those arrested, posted bail and had been freed by mid-afternoon.

“I participated in this action because my heart lead me to commit myself to put everything on the line for something much bigger than myself,” Sisa wrote in a Facebook post Thursday. “As immigrant youth, we know the power we hold and we will no longer settle for anything less than permanent protection, respect and dignity for ourselves, our parents and our communities.” 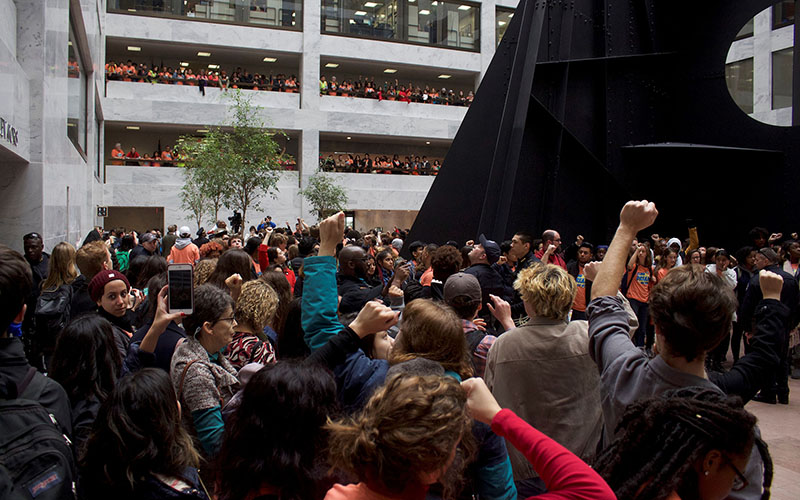 Chants calling for a vote on a Dream Act – and calling out House Speaker Paul Ryan, who has refused to expedite a vote on the bill – echoed off the marble walls of the Hart Senate Office Building’s atrium. (Photo by Andrew Nicla/Cronkite News)

After leaving the office building, protesters marched peacefully across the Capitol grounds, chanting and waving signs. They stopped at several points to demand action before ending up at the West Front of the Capitol.

Rosa Maria Soto, 64, an undocumented mother from Phoenix, was there to represent her mixed-status family, carrying a handwritten note from her granddaughter to members of Congress. She said she is afraid of what could happen if Congress does not act.

“I have a commitment to my family, to my community to be fighting for protection for them,” Soto said in Spanish, as Ruiz translated. “This is why I am here advocating. Otherwise, if there is more enforcement, people like me will be at risk of deportation and separated from our families.”

Ruiz said the Arizona Dream Act Coalition has been regularly holding demonstrations, organizing and reaching out to lawmakers. Not it’s time for Congress to “do their job,” she said.

“We cannot afford to have all these people that have been integrated to fall out of status,” Ruiz said. “The lives of our people are urgent. We’ll call, we’ll send letters and we’ll make sure that they hear our stories and our voices until they finally understand that this is important.”