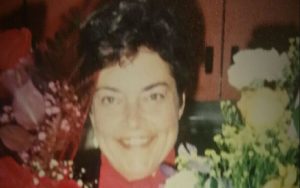 Jane McSpadden, a theater teacher for more than four decades who died four years ago, holds flowers after one of her shows. (Photo courtesy of Karen Duckworth-Barnes)

Two boys jump up and down, vibrating with excitement as they don military uniforms under the house lights.

Stage hands run a red gel over the stage backdrop to cast a scarlet glow over the set, lighting a scene of a military recruitment office in 1968.

Actors and stagehands are preparing for a play to honor theater teacher Jane McSpadden, who taught at Thunderbird High School for four decades and died of cancer four years ago.

Karen Duckworth-Barnes, a former student from the class of 1996, gathered former and current students to put on the “The Boys of Winter,” about two boys who become friends as hockey players and, years later, meet one another again as soldiers in the Vietnam War.

The play was a favorite for Jane McSpadden, known as “Mac,” a thespian committed to the profession and her students. She taught at Thunderbird from 1977 until she retired in 2003.  She volunteered with the theater program until 2013, when she died of cancer.

Duckworth-Barnes, who created the Janie “Mac” Memorial project to show her appreciation, said the play is to connect alumni and raise money for a marquee in McSpadden’s name. Her supporters hope to eventually get the high school’s theater building named after her.

Duckworth-Barnes remembers the last time she visited McSpadden at the school.

“I’ll see you soon,” she said. A few years later, she attended her former teacher’s funeral.

“I got busy,” Duckworth-Barnes said, tears in her eyes. “By the time I realized I needed to see her and say goodbye, it was too late. That’s what’s been so hard…that I didn’t get to tell her thank you and I didn’t get to say goodbye.”

The project is her way of saying thanks. McFadden’s former students from as long ago as the 1980s are joining current Thunderbird students to put on the play.

Dean Kaner was a fledgling playwright when he co-wrote “The Boys of Winter.” Then, a high school theater teacher took a chance on an unknown writer in 1999. 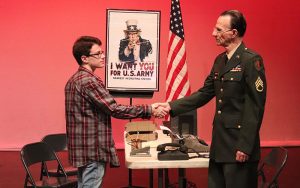 After the Thunderbird debut, the play went on to win awards. It made sense, Kaner said, to revive the play in McSpadden’s honor.

“When she passed away, I thought ‘She really loved this play and she never got to see the adaptation that we’re doing right now.’ I said, ‘let’s just do this in her memory.'”

Duckworth-Barnes, who is the director, said cast members and crew recalled “Mac moments” as they worked on the play.

McSpadden kept copious notes on shows, photo albums and framed photos of cast members.  Duckworth-Barnes said she even found a stuffed teddy bear, wearing a Phantom of the Opera mask, that a student from the 90’s gave McSpadden. She had the bear framed in a glass shadow box.

Laura Marchal Permenter, who graduated in 1982, was an eager freshman when she walked into McSpadden’s theater arts class.

“I noticed right away that the upperclassmen and Jane had this really great bond,” Permenter said.  “Mac, as we called her, was this really young, very kind woman who nurtured her students and gave them an outlet for their quirky, loud and crazy behavior. Somehow along the way, she created this tight-knit group of students who did pretty much everything together.”

Years later, Permenter and other alumni took care of McSpadden as she struggled with cancer. Permenter was at a hospice center when her teacher died.

“I believe that we were all influenced and inspired by Jane,” said Permenter, who later became a high-school theater teacher. “My old students all know who Mac was because I remained tied to her throughout my education career.  I feel blessed that I was able to be present at the end of her life because she gave so very much to me.”

Multiple generations are involved in the new play. The show casts real-life father and son Mike Phillips, who graduated in 1996, and Robert Phillips, a freshman as father and son in the show.

Hugh Hansen, an AP physics teacher when McSpadden also worked at Thunderbird, is the narrator.

Maddy Fowler, a junior who has a role as a wife in the play, said she never met McSpadden but still feels a connection.

“It’s been really moving to see how two different generations of theater students have come together to form one show,” Fowler said. 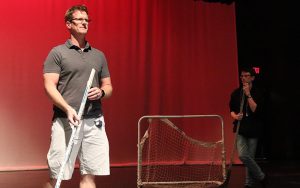 Mike Phillips, a 1996 Thunderbird High School graduate and his son, Robert Phillips, a freshman at the school, play a father and son in the play. (Photo courtesy of Karen Duckworth-Barnes)

“The Boys of Winter” will put on two performances at 6:30 p.m. Friday and Saturday at Thunderbird High School Auditorium in Phoenix. Half of the proceeds from the $10 general admission tickets will go to the theater program and the other half will go to the McSpadden marquee project. A VIP event, which will include a silent auction and backstage experience, will be at 5 p.m. Saturday with proceeds going to the project. Tickets cost $20.

The audience and Thunderbird theater alumni will get something special as well, Duckworth-Barnes said. Everyone will get a Mac note of appreciation.

And, before the curtain rises for each performance, the audience can experience a McFadden ritual with the play’s cast and crew. It was how she inspired everyone to take the final steps toward a great performance.

They will sing the John Rutter hymn, “The Lord Bless You and Keep You”