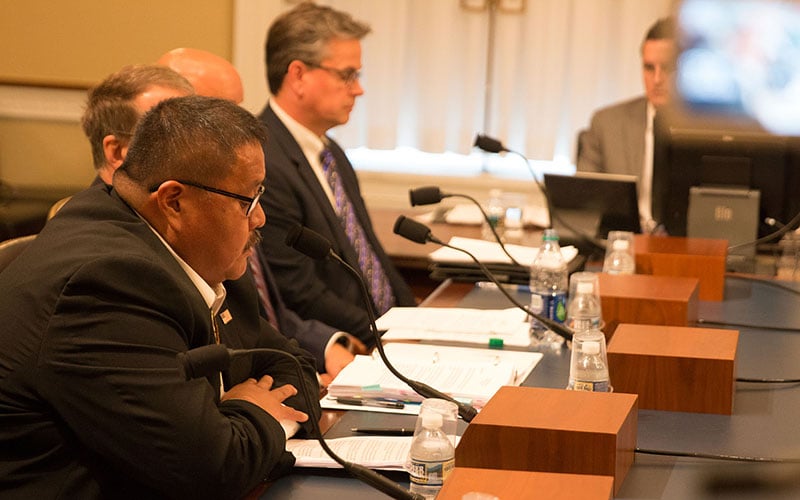 Kasey Velasquez, left, vice chairman of the White Mountain Apache Tribe, told a House panel that the tribe needs a simple fix to a federal law to let it continue work on a badly needed drinking water project. (Photo by Isaac Windes/Cronkite News)

WASHINGTON – A White Mountain Apache leader told House members Thursday that the tribe desperately needs to “replace the failing and terminal groundwater well system,” but that current Interior Department regulations are preventing the tribe from moving forward on the project.

Tribe Vice Chairman Kasey Velasquez told a House Natural Resources subcommittee that Interior officials do not oppose the project, but that they are not sure current regulations allow money from a settlement fund to be “used for the system’s cost overruns.”

The solution, the Apache say, is a one-page bill that would add 17 words to the law to clarify the situation. But Velasquez said it is needed urgently so there is no delay in work to improve the dire condition of the tribe’s critical water infrastructure.

“The tribe’s current water sources and antiquated infrastructure have been, and continue to be, grossly inadequate to meet the current demands and needs of our reservation communities,” Velasquez said Thursday.

“We must ensure its timely design and completion by resolving the cost issue within the act’s existing authorization now, not later,” he said.

But the seemingly simple change to the law has moved at a typical Washington pace.

An identical bill was passed by the Senate last year, but never made it out of committee in the House.

When the latest bill was passed by the Senate in May, Sen. Jeff Flake, R-Arizona, called it “no small task” and said Senate approval was a “significant victory for the state.” His co-sponsor, Sen. John McCain, R-Arizona, said in a statement at the time that the “federal government owes it to the White Mountain Apache Tribe to meet its obligation under the water-rights settlement.”

That bill now sits in the House Natural Resources Committee.

Interior Department officials were not invited to testify at Thursday’s hearing. But in comments to the Senate Indian Affairs Committee in 2016, the last time the bill had a hearing, a department official testified that the agency “supports the ongoing efforts to implement the White Mountain Apache Tribe settlement; however, we do not have sufficient information to develop a position” on the bill.

While Velasquez and other tribal leaders said they would not discuss ongoing negotiations with Interior, they said they were actively working with the department to find a solution to the water settlement process. The clarifying language would bring them “one step closer” to finishing the project, they said.

Rep. Paul Gosar, R- Prescott, said in Thursday’s hearing that language in the latest version of the bill would “clarify the congressional intent of the settlement,” and he submitted letters in support of the bill from the Salt River Project and the Arizona Department of Water Resources.

In addition to health concerns, Velasquez pointed to the economic harm his tribe of nearly 14,000 faced has suffered as a result of not having a sufficient source of clean, running water.

“Despite hundreds of miles of streams on our land, our own economic development has been stifled by a lack of safe, clean and reliable drinking water, for our people, housing, schools, hospital and reservation residents,” he said.

“As I testify before you today, I am mindful of an image and a hope that I’ve held for years,” Velasquez said at the hearing. “That I would be fortunate to live long enough to see a child … open a faucet on a kitchen sink to fill a glass of water – something they cannot do today.”