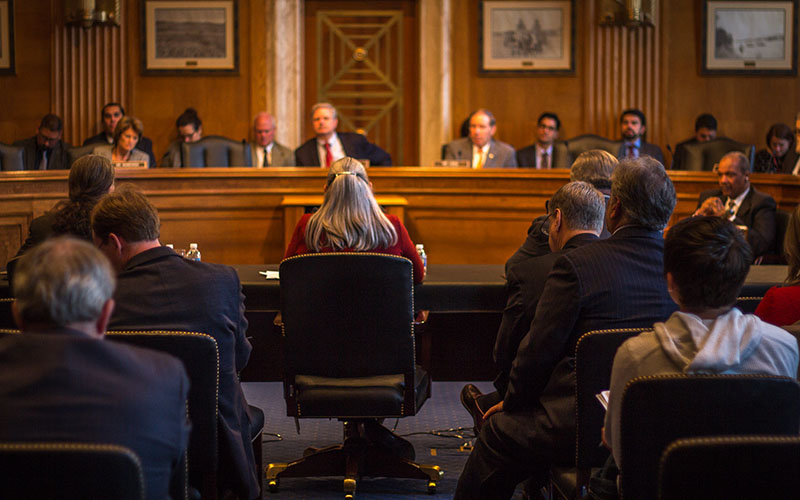 Witnesses told senators on the Indian Affairs Committee that federal tax code, targeted for an overhaul by Republicans, has been hindering economic growth in Indian Country. (Photo by Adrienne St. Clair/Cronkite News)

WASHINGTON – A day before House Republicans were expected to unveil their plan to overhaul the tax code, tribal leaders and senators complained Wednesday that Indian Country once again does not have a seat at the table.

Tribal leaders told members of the Senate Committee on Indian Affairs that tribes struggle with economic growth because of things like basic federal tax law, dual taxation from state governments and budget cuts from the federal programs that serve them. They urged lawmakers to push for legislation that will help Indian Country, including increasing investment incentives and allowable tax credits.

Witnesses and senators agreed the tax code currently favors state and local governments, and that the current imbalance is not only unfair, but it hinders economic growth on tribal lands.

Tribes “aren’t treated the same as state and local governments across the board on a whole series of issues,” John Dossett, general counsel for the National Congress of American Indians, said after the hearing. “Tribes are … either ignored or they’re an afterthought.”

Dossett said there are many cases where state governments have more power than tribal governments, like the federal Adoption Tax Credit, which gives a tax credit to parents who adopt a child with special needs. But the credit only applies when a state court, not a tribal court, rules that a child has special needs.

Another problem is dual taxation, in which state governments collect tax from non-tribal businesses on tribal lands, in addition to any taxes the tribes may levy, said Navajo Nation President Russell Begaye, who was in the audience at the hearing. He said that dual taxation makes companies less likely to build on tribal land.

When one does build on Indian land, Dossett said, the state gets most, if not all, of the taxes while the tribe may get a small percentage or nothing. He called the states’ tax leverage the “most fundamental inequity in the system for tribal governments.”

Begaye said each tribe is its own nation, and the federal government should tell states that it will work “directly with them (the tribes), so hands off. We don’t want the state imposing any kind of taxation on Indian land.”

“That should be very clearly spelled out with no question,” he said.

But Begaye said he does not expect change soon on this issue of dual taxation. “The states will kick back. They will fight back,” he said.

Everyone at the hearing said that tribes should have had a larger role in development of any tax reform plan. Dossett noted, “there have been some efforts. There was at least one meeting where some tribes were invited to the White House,” he said.

But Begaye said that the invitation should have been extended to a wider variety of groups.

Sen. Tom Udall, D-New Mexico, noted reports that the GOP plan could include $5 trillion in cuts over the next 10 years, but that, “The majority is not sharing where those cuts will come from.”

“What we know about the Republican tax plan shows little promise for Native communities,” said Udall, the ranking member of the committee.

Udall noted that “the administration could not bother to send a witness for this hearing to discuss its signature issue of tax reform.”

Dossett and the lawmakers agreed with Begaye that “they need to do more. Not enough has been done.”

In the meantime, he said, the Navajo are working to build their economy despite challenges posed by the tax system.

“On Navajo, we’re doing it ourselves. We’re going outside of government and going to private corporations to draw them in. And we’re using tax laws,” Begaye said.

Begaye said the Navajo, like other countries, have also found a way to provide federal tax exemption to companies interested in manufacturing that want to come onto the reservation.

“We have the same conditions for tax breaks and so forth,” he said. He said the Navajo Nation did a study, and they came in third, just after Mexico and China, in terms of corporate appeal.

He’s hopeful that Navajo can continue to build their economy that way, even as Congress fights over tax reform.

Dossett said he can’t say how much the tax code will cater to Indian Country.

“I suppose we don’t know until we see the legislation and nobody’s seen it yet,” he said. But, he said, now is the time for tribes to push for reform.

“There’s a reason tribes are doing it now, said Dossett. “That’s when the system is at play, right? That’s when the tribes can be like, ‘All right, we want a seat at that table, now.'”