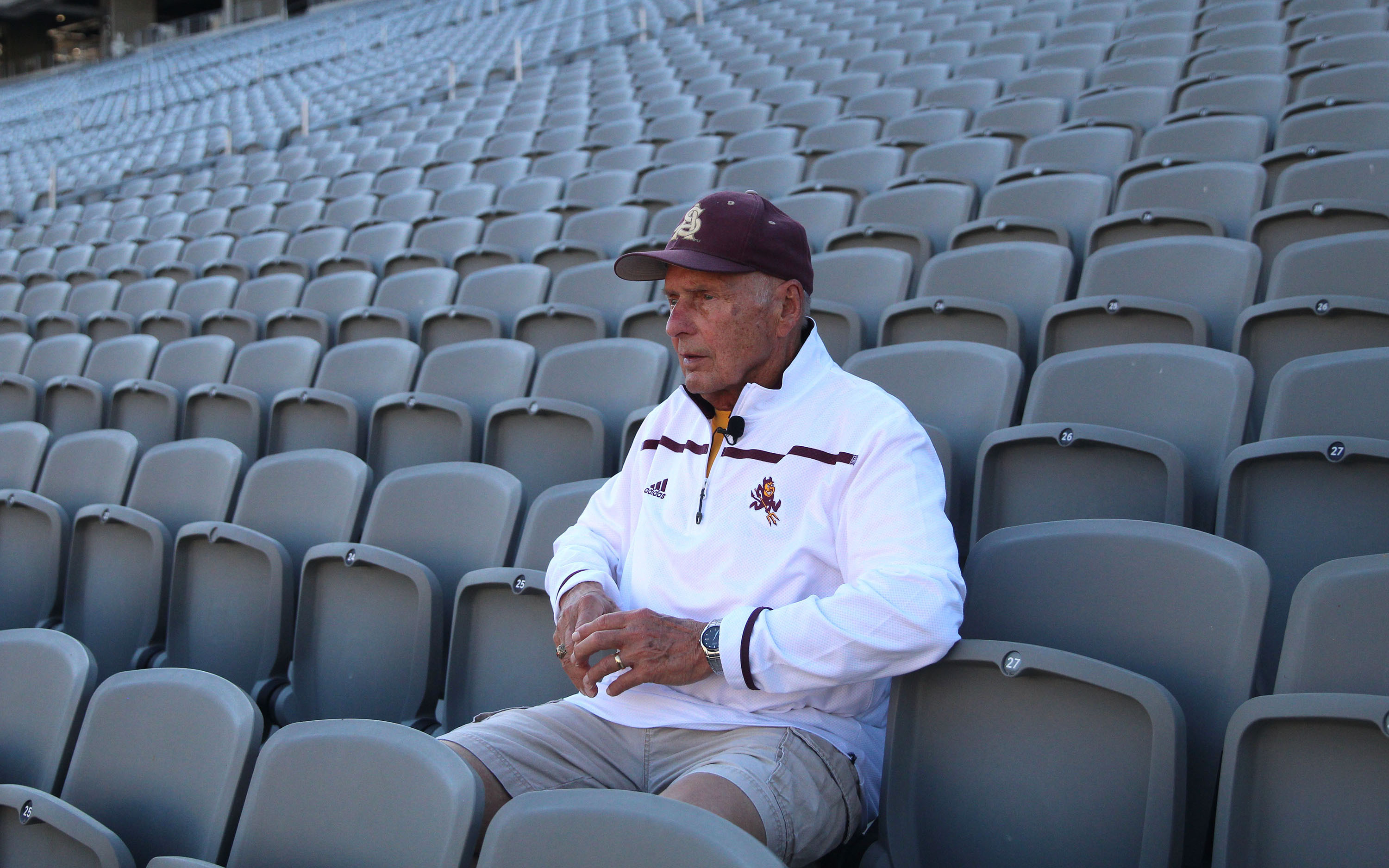 Former Arizona State quarterback Fran Urban sits in a Sun Devil Stadium that looks quite a bit different from when he competed there. Urban played in the stadium after it opened nearly 60 years ago. (Photo by Edwin Rodriguez/Cronkite News) 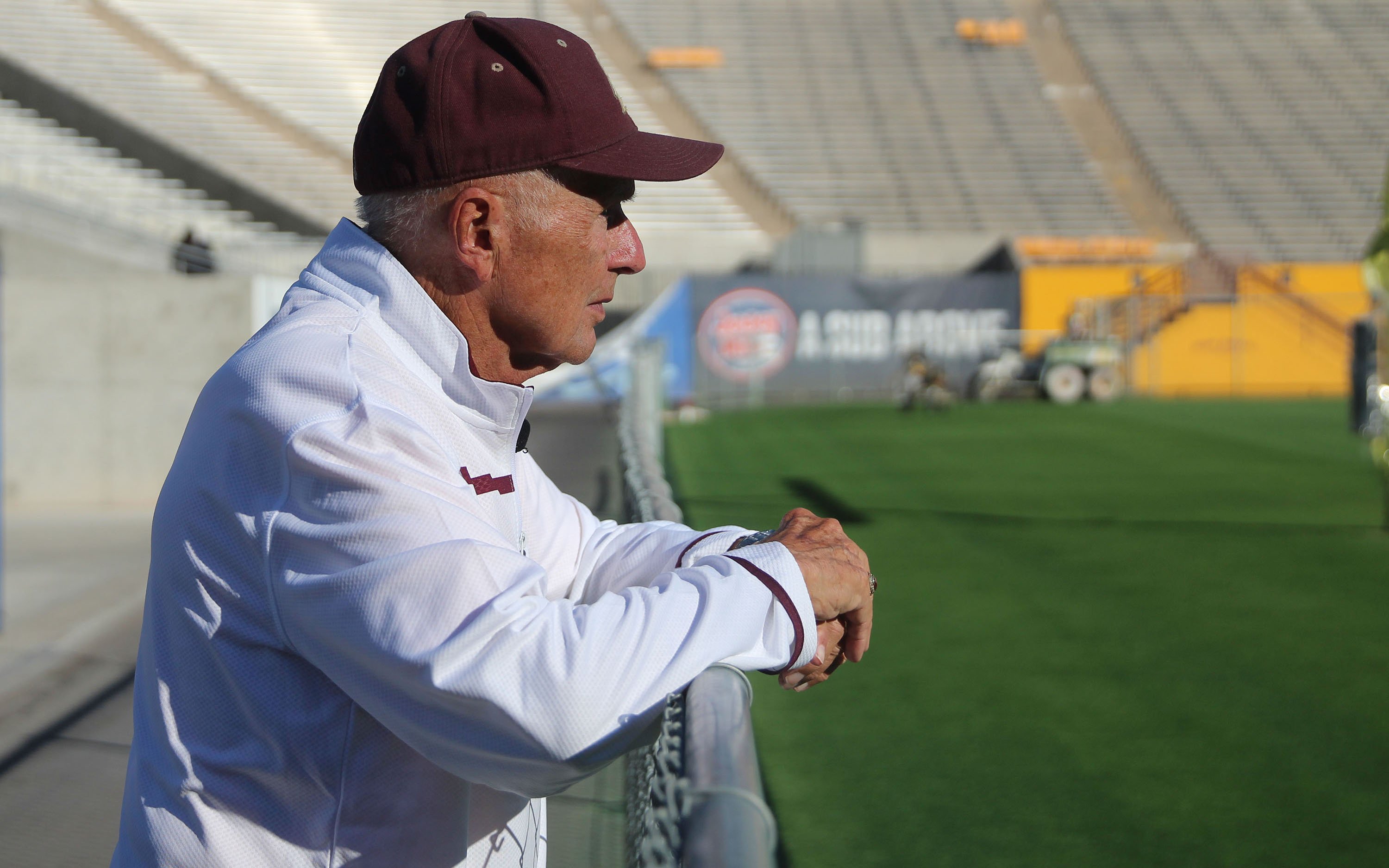 Former Arizona State quarterback Fran Urban has fond memories of Frank Kush, who recruited him to Tempe. He remembers the time Kush was so mad at his players he threw newspaper clippings at them. (Photo by Edwin Rodriguez/Cronkite News) 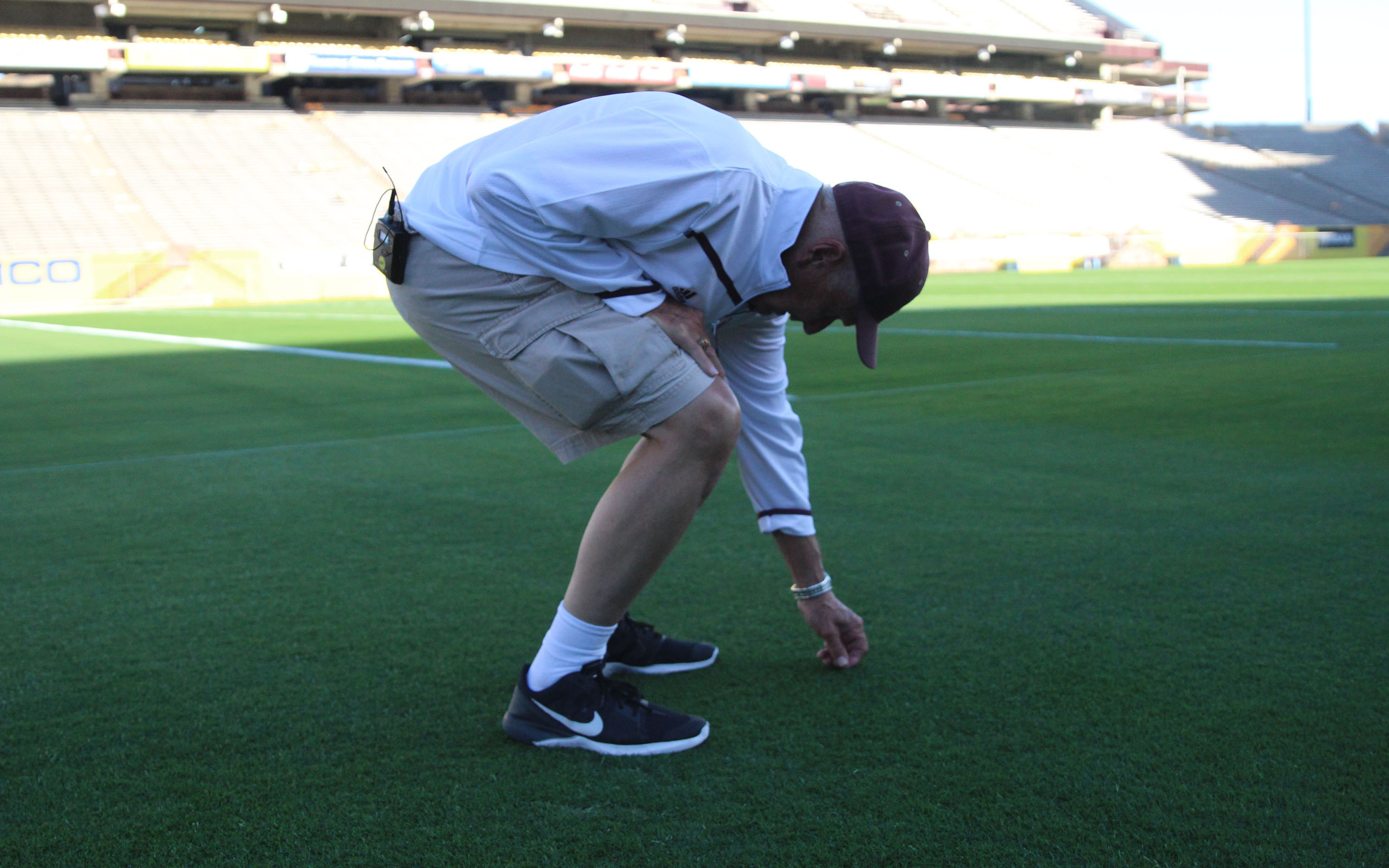 Former Arizona State quarterback Fran Urban enjoyed a full tour of Sun Devil Stadium a day before ASU was set to face USC in a homecoming game. He said he is a fan of Sun Devils coach Todd Graham. (Photo by Edwin Rodriguez/Cronkite News) 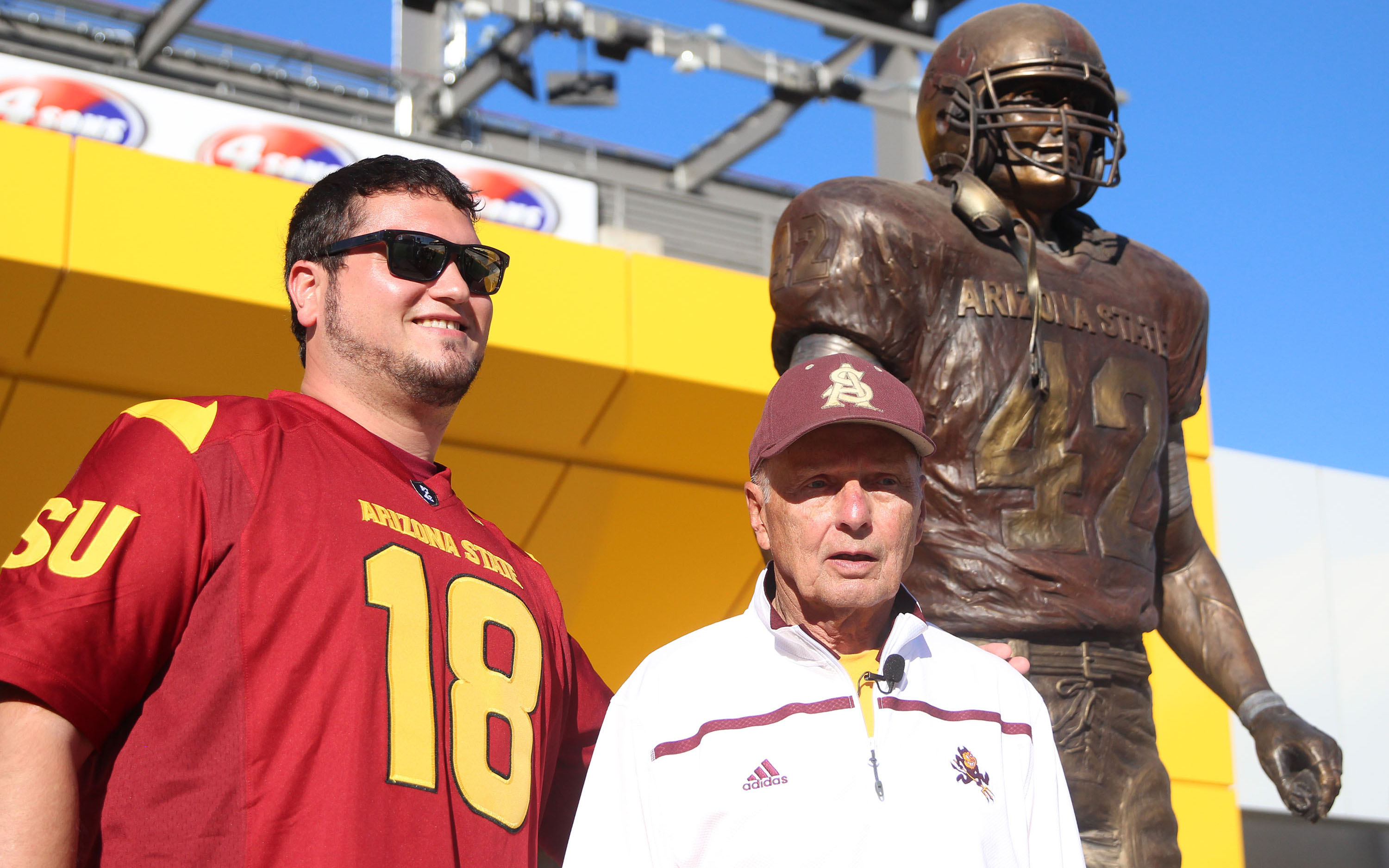 Former Arizona State quarterback Frank Urban, center, stands next to the Pat Tillman statue with his grandson. After taking a tour, he said he was blown away by the amenities at Sun Devil Stadium. (Photo by Edwin Rodriguez/Cronkite News)

TEMPE — Nestled between two buttes sits iconic Sun Devil Stadium. The structure that opened in 1958 and has hosted the Pope, the Rolling Stones and countless football games has also undergone multiple transformations throughout the years.

Before it was built, Arizona State played at Goodwin Stadium. It was located where the W.P. Carey School of Business now sits and was shared with the Tempe High School football team. When Fran Urban played quarterback at ASU from 1955-59, he played most of his games there.

“I remember Frank Kush remarking when he first came out here (as an assistant in 1955) and Dan Devine was the head coach,” Urban said Friday. “Frank Kush recruited me and he said, ‘Where’s the stadium?’ and the guy told him, ‘Well you just passed it,’ and he says, ‘That’s the stadium? We have bigger high school stadiums back home.’

“Here we are now. I’m totally lost with this facility.”

Urban’s words came as he toured new-look Sun Devil Stadium. In town for ASU’s homecoming game with USC Saturday, he marveled at the structure as he walked on a field that he played on during the 1959 season.

He saw the new Pat Tillman statue, and walked down hallways filled with Sun Devils football history. He was shown the new locker room and weight room, and was in awe of the state-of-the-art facilities.

Urban’s Sun Devil story began in 1955, when he began his college football career. Before his stop in Tempe, the only time he played football was during the Korean War, while he was stationed in Germany.

In high school, he said he was cut from most teams because he was small. It was a friend and fellow service member that was going to attend USC to play football who told him he had talent. He was helping his friend prepare for when he returned to the states.

With his friend’s advice, he stepped on the football field and led his military team to a 7-6 victory. From that day on, he was the starting quarterback for his military’s team.

After he returned from the service, Kush heard about Urban’s skills. He recruited him to come play for what was then known as Arizona State Teacher’s College, and the rest is history.

“I can take credit for one thing: I helped blaze the trail out here,” Urban said. “I’m so proud of this school. I guess (ASU president Michael Crow) is really on top of everything.”

For having little football experience, Urban excelled during his time at ASU. He led the team to a 10-1 record in his only starting season, 1959, and played in the Copper Bowl, which was an all-star game.

“We had a (running back) out here by the name of Prentiss Gautt …the first black to play for the University of Oklahoma,” Gautt said about the all-star field. “He broke the color barrier. Great guy. He played for the (St. Louis) Cardinals in pro football and then he got into the front office. He became the (assistant) commissioner of the Big Eight.”

Urban attended the school during an important time. In 1958, Arizona State Teacher’s College was set to go in front of the Arizona Board of Regents to potentially become a university. The move was heavily fought by the University of Arizona.

“Before the vote of Proposition 200, do you remember somebody burning, ‘NO 200’ through the middle of the football field?” Urban said. “They said it was Arizona students. They did not want Arizona State to become a university because they wanted to be the only university.”

The soon-to-be Arizona State University shut out Arizona that year 47-0.

“I can tell you some stories about Mr. Kush that would make you laugh,” Urban said. “We’re playing up at Colorado State and I’m sitting here and he’s giving us a halftime
speech. We’re winning, but you wouldn’t have known it. He had clippings, a pile of clippings, and he said, ‘The trouble with you guys is you read your clippings,’ and boom, he threw it and it hit me. Clippings all over the place. Stuff like that, but he was great.”

Under the statue of Kush is a plaque with the names of former players who donated funds to for it. Among those on the list is Urban.

Once he left Arizona to return to Johnstown, Pennsylvania, it was hard for him to return for games. His last visit was seven years ago. He often talks about his years in Tempe.

“I’ve heard all the stories,” his son, Timothy, said. “It’s pretty awesome. It’s nice to see where your dad did his college.”

Any time a game is broadcast, Urban tries to watch it. He is a big fan of what coach Todd Graham has done with the team and its level of talent.

One of his favorite players of all-time was quarterback Jake Plummer. When Urban saw a picture of Plummer on the wall in the facility, his face lit up.

“Here’s my man. This is a good man here, Jake,” Urban said. “What do I like? I’ll tell you what. He’s what they would like in my hometown.”

In 1996, Urban came back for a reunion party in Tempe. That was when Plummer led the team to a victory over Nebraska with his teammate Tillman.

His grandchildren, Samuel and Daniel Curry, jumped on the opportunity to accompany him on this trip and were ecstatic to learn about the university that made a lasting imprint on their grandfather’s life. Daniel has a custom-made Arizona State jersey with Urban’s name and number on it.

“Just hearing all his stories, seeing where it all played out and seeing his reaction to how everything has changed so much, it means a lot just to be able to experience it with him,” Daniel said.

“It’s awesome. I’ve never been out to Arizona before,” Samuel said. “So just to come back with him and see him cherish his moments he’s had here, it’s just a great feeling.”

At homecoming, Urban is hoping to see some of his old teammates. There are two other former ASU players that Urban sees around, as they all live in the same town. However, he has lost contact with a majority of them.

Still, even at 84, his passion for ASU football remains strong.