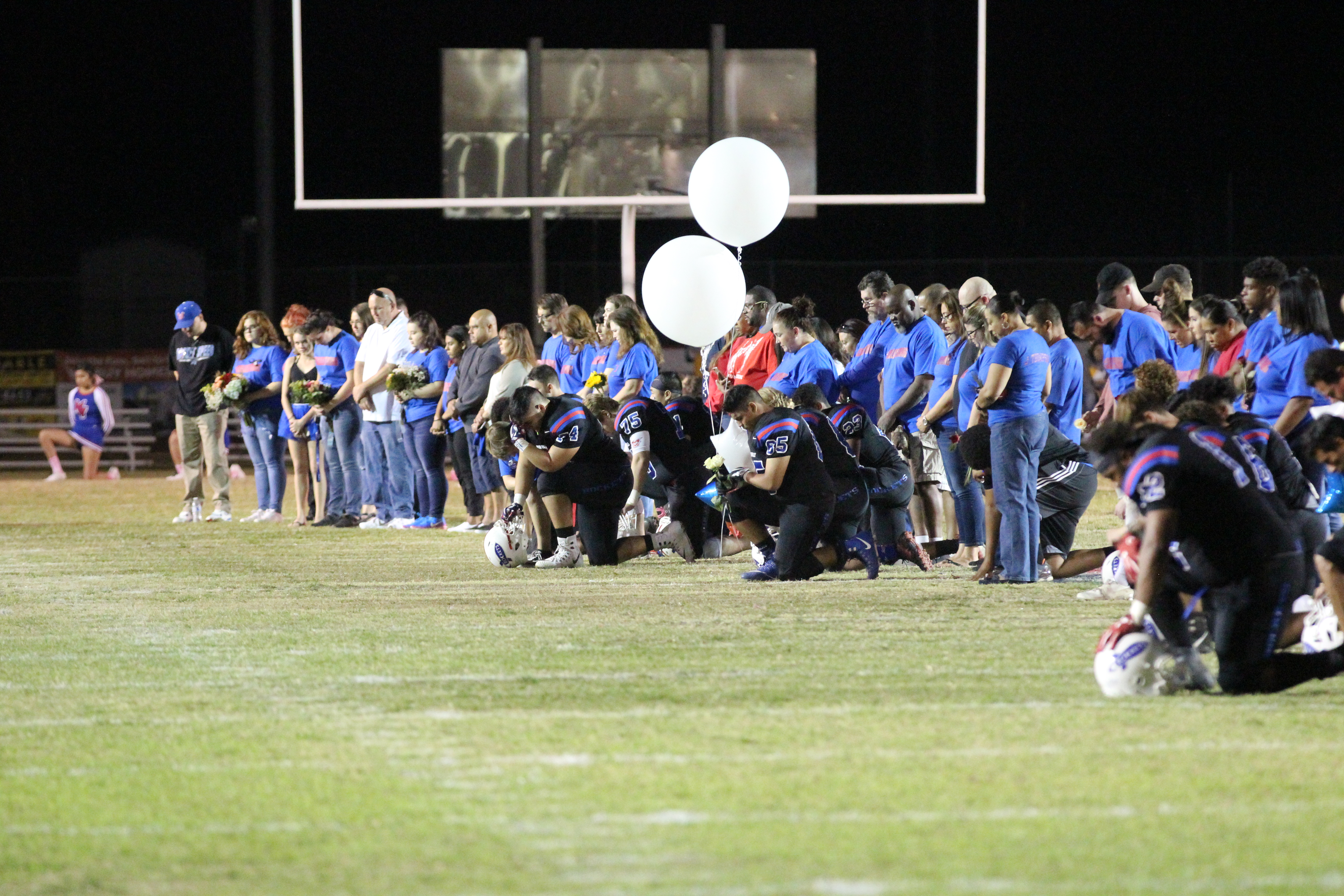 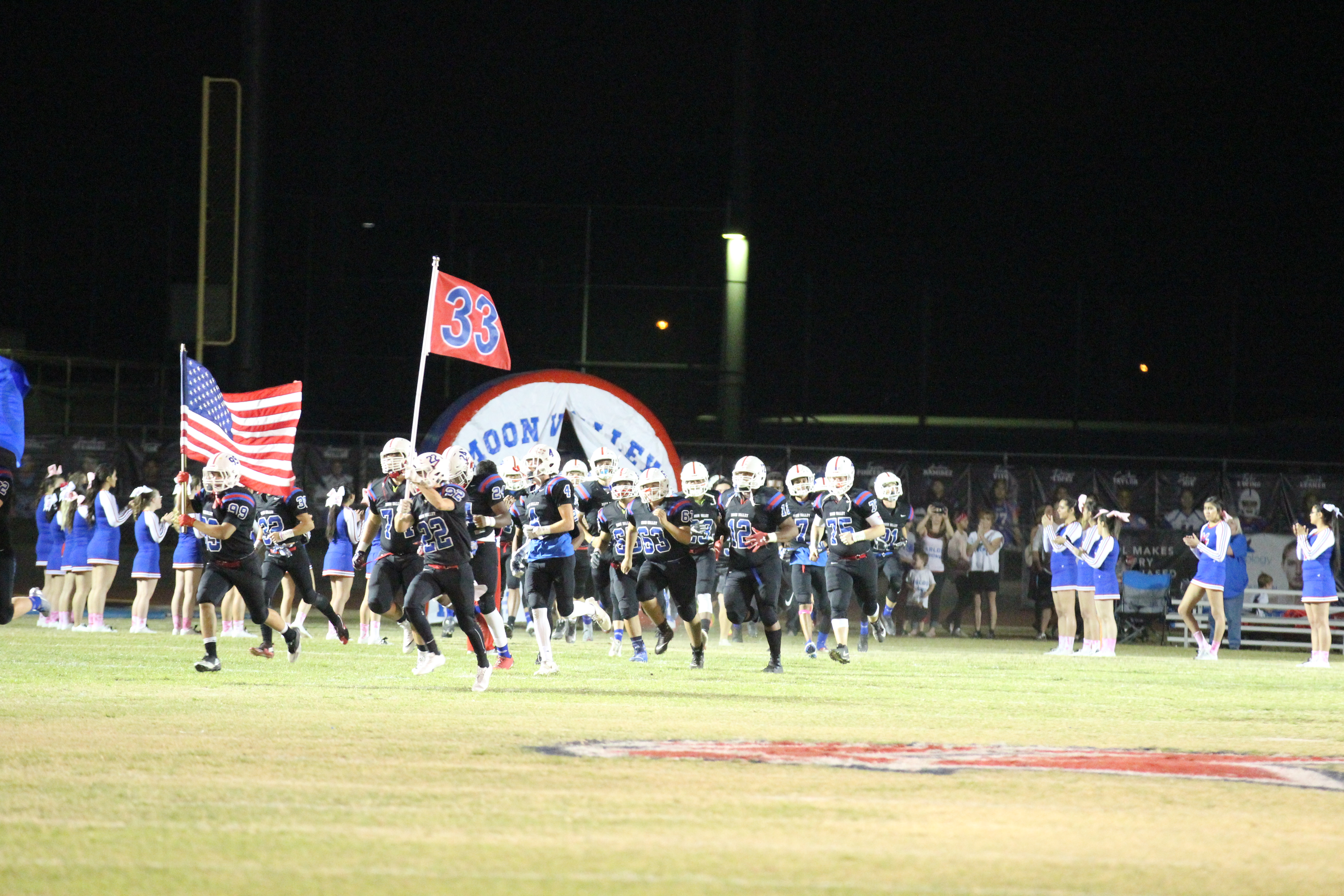 Moon Valley High School football players run onto the field with a flag sporting No. 33, a nod to their fallen teammate, Carlos Sanchez. Sanchez was honored during the team’s game on Friday. (Photo by Jamie Nish/Cronkite News)

PHOENIX — Moon Valley High School captains brought out a No. 33 jersey to the coin toss. They placed white roses at the 33-yard line. And fans and players alike partook in 33 seconds of silence for the late Carlos Sanchez.

As if senior night and the team’s last regular season home game were not enough to be anxious about, football players were noticeably without a member of their team Friday.

Sanchez, 16, was blocking on a play in the team’s last game on October 20, then made it to the sideline, collapsed and was later pronounced dead at a nearby hospital.

With the home crowd seemingly eager for something to cheer about, visiting Peoria made it difficult to get excited, returning the opening kick for a touchdown and jumping out to a 26-0 lead at halftime.

The final score was 53-8, but that hardly made a difference for the Rockets, who won just by dressing and competing.

Booster club president Shawn Kaowili said the players were given a chance to vote on whether they wanted to play Friday or not, and it was clear there would be no pressure either way.

After about 95 percent of the players decided to come out for the game, he said coach Seth Millican told them stepping on the field was a victory itself.

“During the team dinner last night, coach Millican and the rest of the coaching staff told them that he was proud of them, that the toughest thing that they did this week was voting to play,” Kaowili said. “And he said by you guys allowing yourself to vote amongst yourself to play the game, you guys have already won.”

On Monday, Millican said he was in a ”cloud of guilt and doubt and fear,” and even spent about 20 minutes trying to convince his players to not play.

But they were not having that.

“I’ll tell you the truth, they motivated me,” he said.

As a parent of a senior on the team, Kaowili said he felt deeply saddened, with his son on the field at the same time as Sanchez went down, but noted that there has been a significant outpouring of support by much of the local high school football community.

On a night of sadness, and one with desperate need for an uplifting personality, Millican recognized the cruel irony of missing one of the team’s most upbeat characters.

Frustrated, down a seemingly insurmountable lead and unable to get back into the game, he recognized a player like Sanchez would have been a perfect motivator for the players, if only circumstances had been different.

“He was the kid walking up and down the sidelines trying to keep people’s spirits up, and when the game went bad he was just a source of strength for the team,” he said.

Following the game, players and coaches from both teams kneeled together, and Millican said a prayer in Sanchez’s honor.

“I said thank you for the support we received. I talked about how going forward Carlos will live through their actions as long as they are good people.”

The team’s regular season record now stands at 5-5, and it is yet to be determined if it will claim a postseason bid.