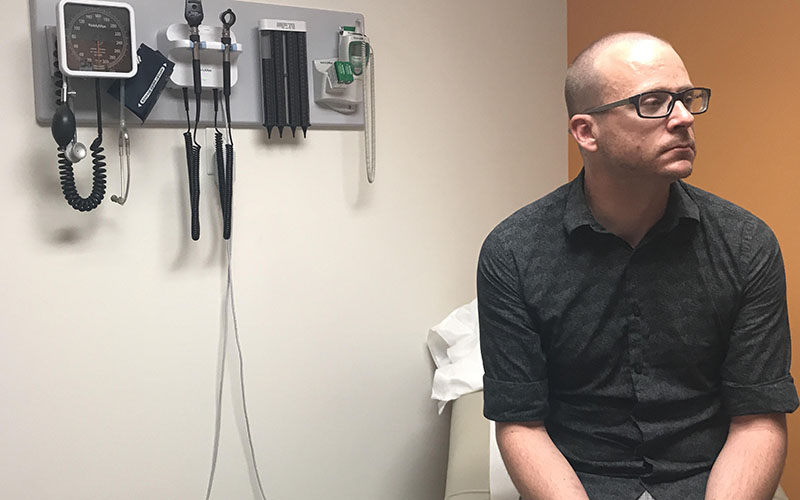 Joshua Olson, diagnosed seven years ago as HIV positive, said at first he was depressed but now wants to erase the stigma still attached to people who are diagnosed with HIV or AIDS. (Photo by Shawna Truong/Cronkite News)

“You don’t really know where to go from there,” Olson said. “I made the mistake of trusting someone I shouldn’t.”

Now, seven years after finding out he was HIV-positive, Olson is at his semi-annual check-up, laughing at a joke with his nurse, and says he hopes to eradicate the stigma surrounding an HIV diagnosis.

“It’s been quite a process from when I’ve found out till now,” Olson said. “I went through some severe depression. It affected my daily life where I didn’t want to get out of bed, I didn’t want to leave the house, it was really rough. But as you cope with it and you seek counseling and things like that, it becomes better.” 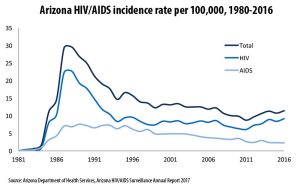 Glen Spencer, executive director of Aunt Rita’s Foundation, a nonprofit organization for HIV and AIDS, says new HIV diagnoses have declined in the U.S. but Arizona has seen a 40 percent increase in new HIV diagnoses over five years.

Rates of HIV and AIDS combined dropped over the years but increased in 2016 compared to the previous year, according to the 2017 Arizona HIV/AIDS Epidemiology Annual Report. The Department of Health Services report shows 17,464 people were living with HIV in Arizona last year and 780 were newly infected in 2016.

Phoenix joined a national initiative to curb AIDS as a public health threat by 2030, using a “90-90-90” goal. The fast-track program seeks to test and identify 90 percent of HIV-positive people in Arizona, make sure 90 percent receive treatment and 90 percent of people already in treatment to achieve an undetectable viral load, meaning little chance of transmitting the disease.

“Some of the strategies that we are employing to try and achieve these 90-90-90 goals are to better educate our community,” Spencer said. The foundation is working to institute a better education through a community coalition, pursuing grant funding, and working with pharmacies so that people have the information that they need. 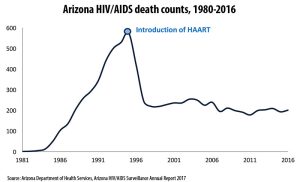 Olson believes it’s important to be an advocate for people diagnosed with HIV. He was ostracized and lost friends years ago.

“You feel different. Coming out as HIV positive to my peers was extremely hard,” said Olson, whose HIV has not developed into AIDS and his viral levels are undetectable. “People need to know that there are people there that understand them, that are there for them.”

Phyllis Coprich, medical case manager at the Southwest Center for HIV/AIDS, said having conversations about sexual health are key to erasing the stigma and perhaps the spread of the disease.

“At one time, it was having to talk about birth control, but you see how prevalent that is now, it’s the same with HIV and sexually transmitted infections,” Coprich said. “The more we talk about them, they become more normalized and become more of a part of a conversation that’s easier to have.”