Chelsea Opat, a senior at Centennial High School, was sitting in a coffee shop one day when she saw Natalie Reilly.

“I was at a local Starbucks writing thank you notes,” Reilly said. “Low and behold, sitting next to me is Chelsea.” 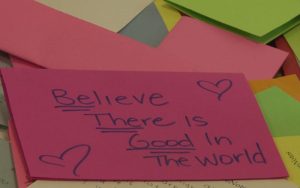 Reilly told Opat about her “Nothing But Love Notes” campaign, asking people to pen appreciation notes to members of the military and other heroes after her mother was diagnosed with breast cancer.

“We just got to talking and we asked her if she wanted to write a thank you note because we were thinking of traveling to Vegas and taking some of these letters for the first responders,” Reilly said.

Opat, an honors student, decided to ask classmates to write notes to law enforcement workers, firefighters and medical workers who leaped to help victims of the Las Vegas tragedy in early October. 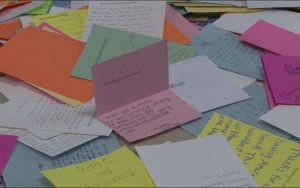 A gunman opened fire from a high-rise hotel at an outdoor concert, injuring more than 500 and killing 58 people, before turning a gun on himself.

Opat took 100 cards to her school the next day. Within 24 hours, students had written 500 letters.

“It’s amazing to know that it spread like that,” said Opat, looking over the letters her classmates had written. “There’s a lot of love in this world.”

By the time students were done, they had written 1,000 thank you notes.

“These notes are simple,” Opat said. “They take less than a minute, and they just mean so much.” 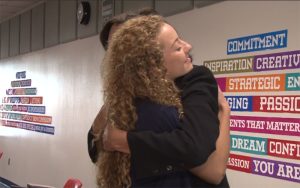 When they were done, the two shared a long hug and Reilly thanked Opat.

Opat plans to take the letters to Las Vegas in November, likely stopping along the way to share a note with a police officer, firefighter or a medical worker.