LAS VEGAS – The Las Vegas Strip, normally teeming with neon, noise and people, was quiet as the city continued to recover from Sunday’s deadly mass shooting that left at least 59 dead and more than 500 injured.

Recent University of Arizona graduate Christiana Duarte, 21, who had been missing after the music festival, was confirmed dead by her family early Tuesday. Her sorority had reached out to social media following her disappearance in attempts to locate her.

Back in Arizona, Gov. Doug Ducey tweeted, “Rest In Peace. Please pray for Christiana and her family”.

Rest In Peace. Please pray for Christiana and her family https://t.co/1yxugZk39Q

In Las Vegas, others grappled with the aftermath of the Sunday night mass shooting.

Las Vegas officials have closed off roads surrounding the Mandalay Bay Resort and Casino where gunman Stephen Paddock rained hundreds of bullets into the unsuspecting crowds at the Route 91 Harvest Music Festival.

“It became fight or flight,” said Arizona State University graduate Justin Uhart. “I didn’t know what I would be able to do but I knew that I would have to try.” 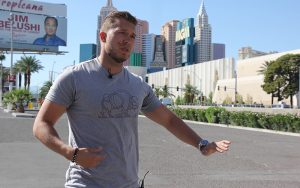 Uhart said he was bartending at one of the most popular bars near the concert venue at the time of the shooting. One of his coworkers was fatally shot in the head right next to him and another sustained a shoulder injury, Uhart said.

Uhart, who has scrapes on his face and bruises on his body and legs, crawled on the ground as the shooting started. He said he plugged the wound of one woman who had suffered a shrapnel injury, which is caused by fragmentation that is thrown out as a bomb or shell explodes. Uhart remained in contact with her and reports that she is now in stable condition.

“I don’t know to feel about it,” Uhart said. “You never imagine it would happen to you and it’s now something I’m not going to ever forget.”

Kingman resident Michael Crocker and his friend Emilie Husselt were considering calling it an early weekend and not attending the final night of the concert, but made a split decision to stay.

“All of a sudden we heard the ‘pop, pop, pop’ and we assumed that since this was the last artist of the last night, someone was just setting off fireworks,” Crocker said.

Crocker estimates some of the first bullets hit as close as 15 feet behind he and Husselt. After realizing the severity of the situation, Crocker said he threw Husselt to the ground and covered her body with his in an effort to protect her from the bullets. 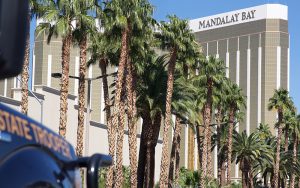 A Nevada state trooper vehicle is parked near the Mandalay Bay Resort and Casino on Tuesday. The Las Vegas Strip is closed near the resort. (Photo by Kianna Gardner/Cronkite News)

The two eventually took shelter underneath the stage where they stayed until the gunfire ended. Although it was complete chaos, Crocker said most people helped those who were scared and wounded.

“It was such a relief after all the horror we had seen, to see people rallying in such a way and caring for each other. It just showed the true dichotomy of that night and the difference between the best and the worst moments of it,” Crocker said.

Concert-goers were ushering others toward safe areas and sacrificing their clothing to plug the wounds of others.

Despite everything, Crocker said he plans to attend the concert next year and hopes others will do the same.

“I saw one human being basically be the worst human that he could be, but I saw the absolute best of humanity in the hundreds of people that I was surrounded by, that got others to safety,” Crocker said. “They were nothing short of heroes.”