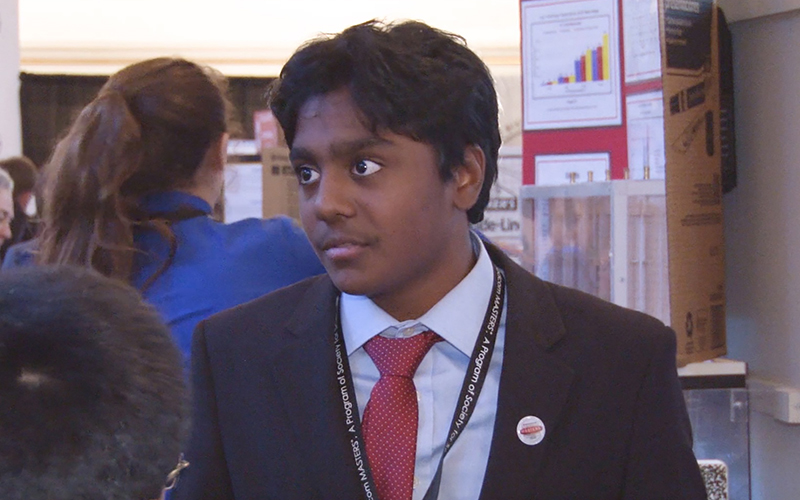 Arjun Moorthy had personal reasons for studying skin cancer prevention, after a teacher and family friend were diagnosed. The Scottsdale middle schooler’s research landed him in the finals of a national science competition. (Photo by Trevor Fay/Cronkite News) 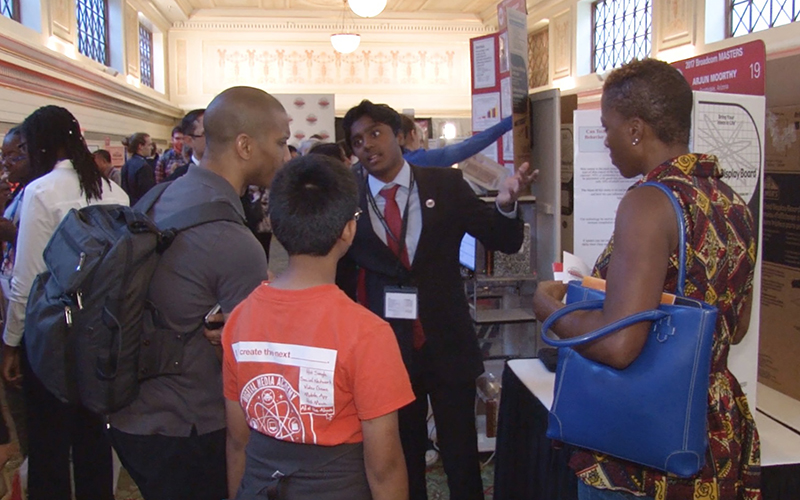 Scottsdale middle-schooler Arjun Moorthy explains his research this weekend to visitors to the Broadcom Masters science competition in Washington, where he was one of 30 finalists from an original field of more than 2,500 students. (Photo by Trevor Fay/Cronkite News)

WASHINGTON – A study that asks the question, “Can Technology be Used to Modify Behavior and Reduce Rates of Melanoma” may sound pretty dry – but for Scottsdale eighth-grader Arjun Moorthy, it’s personal.

Arjun said he started the study after one of his teachers and a family friend were diagnosed with skin cancer.

He developed an app to remind people when to use protection, like sunscreen and hats, and found that those reminders help. But when the reminders are removed, people tend to lapse into bad habits concerning protection from the sun’s rays.

His research landed him a spot in Washington this weekend as one of 30 finalists, winnowed from a field of more than 2,500 applicants, at the Broadcom Masters science competition.

“Today in Washington, D.C., we have 30 of the best research projects in the country by middle-schoolers,” said Maya Ajmera, president and CEO of the Society for Science and the Public, which puts on the event. “They are coming all the way from California, to North Carolina, to Florida, to Montana, to Utah. It is an incredibly diverse group.”

Included in the group is Arjun, a BASIS Scottsdale eighth-grader who said he saw a problem and decided to do something about it.

Skin cancer is a significant problem in Arizona, because of the combination of near-constant sunshine and a climate that leads people to wear clothes that do not adequately protect them from the sun’s rays. The problem hit home for Arjun when a friend of his mom’s died from skin cancer at age 26.

“That was one major inspiration,” Arjun said. “I also had a P.E. teacher who had melanoma and had to go through chemotherapy.”

To help his friends and family, Arjun created an app called SMART – UV Protection, what he calls “a constant reminder system” to let people know when it’s time to use more sun protections.

“For example, I sent almost like a notification to them on a daily basis to remind them to use some protection,” he said. “Everybody’s on their phones these days, so I thought if I could remind them using a notification system, then that will decrease their chances of getting skin cancer because they will apply sunscreen more often.”

And they did apply protection when they got the reminders. But Arjun also found that when the reminders went away, people would fall back into neglectful habits.

Arjun was speaking Saturday at Washington’s Union Station as he stood in front of a board displaying his research, surrounded by the other finalists in the competition.

This is the seventh year that the Broadcom Foundation and Society for Science and the Public have put on the competition, which Ajmera called “the most powerful STEM competition for middle school students in sixth, seventh, and eighth grade.”

During several days of competition last week, the finalists – evenly split between 15 boys and 15 girls – showcased their projects and competed as teams in hands-on activities that tested their abilities in STEM, critical thinking, communication, creativity and collaboration.

The competition culminates with an awards dinner Tuesday where cash awards ranging from $2,500 to $25,000 will be handed out to the top finalists. Each of the 30 finalists will also bring home a $1,000 award for their schools to use for STEM activities.

Arjun said being in the finals has been an honor, and jokes that his friends see him in a new light now.

“They see me – I think my name is kind of correlated with ‘science fair’ now, because this has been a big success for me,” he said.