Some communities, like the one in Portsmouth, New Hampshire, near the former Pease Air Force Base, come together to raise awareness after learning of PFAS contamination, hoping to warn of the potential hazards of the chemicals and to prevent further exposure. (Photo by Adrienne St. Clair/Cronkite News) 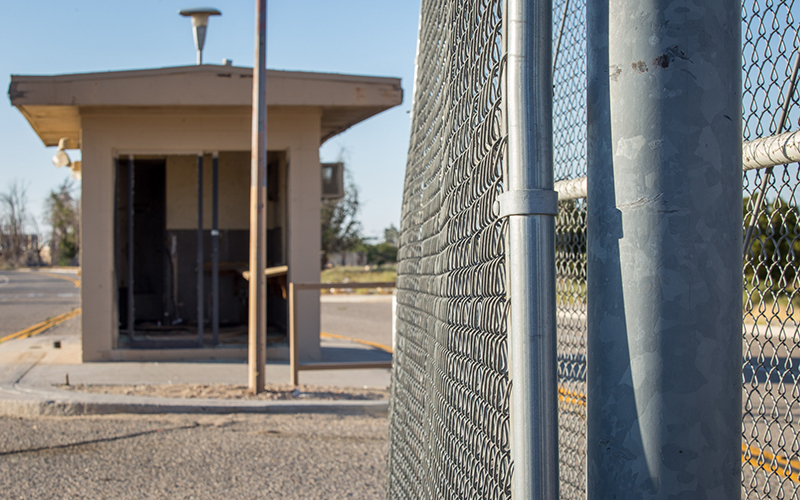 The entrance to the former George Air Force Base has stood empty for decades. The base, at the edge of the Mojave Desert, is one of over two dozen U.S. military bases where PFAS contamination has been discovered in the groundwater. (Photo by Adrienne St. Clair/Cronkite News)

WASHINGTON – The Air Force will begin testing the groundwater at Davis-Monthan Air Force Base for contamination from dangerous chemicals in firefighting foam that was used at the base, according to the U.S. Air Force Civil Engineer Center.

The Davis-Monthan inspection follows similar testing at Luke Air Force Base in Glendale and the former Williams Air Force Base in Chandler. They are part of a systematic nationwide testing program the Pentagon announced in March to look for per- and polyfluorinated alkyl substances (PFAS), which the Environmental Protection Agency has said may be hazardous to human health.

The Army, Navy and Air National Guard are also testing for the pollutants. In all, the Defense Department will test water at 395 active and closed bases across the country, according to a report by News21.

PFAS contamination has been found in the drinking water at 26 Air Force bases as of Thursday, the Civil Engineer Center said Thursday.

Twenty-nine journalism students from 18 universities spent months this year reporting on drinking water contamination in the U.S. from a variety of sites and viewpoints. The full 10-part Carnegie-Knight News21 project, “Troubled Water,” and an accompanying documentary can be found here.

The Arizona Department of Environmental Quality is aware of the testing and will review the results, said department spokesman Sam Nuanez.

In Tucson, home to Davis-Monthan, a city water department spokesman said the agency tests its wells often for PFAS, but that it’s “probably a good idea” that the Air Force will be testing water on the base.

The spokesman, Fernando Molina, said the water department shut down three drinking-water supply wells on the northwest side of Tucson in September 2016 after tests found PFAS-levels higher than the EPA’s recommended safe level of 70 parts per trillion. The EPA does not regulate these chemicals, but set the safe level in a 2016 “health advisory,” which is also used by the Pentagon.

Molina said the department is still investigating the source of the well contamination, but he believes it may have come from the wastewater treatment plant, and not the military base, as the wells are downstream from the plant.

“The wastewater treatment process is not designed to remove these components,” Molina said.

The contaminants were first manufactured in the 1950s by the 3M Co. and later by DuPont for use in consumer products like Teflon, Scotchgard, water-resistant clothing and food packaging like fast-food wrappers and microwave popcorn bags.

The Air Force began using two PFAS chemicals – PFOA and PFOS – in 1970 in its aqueous film-forming foam, which was the “the most efficient extinguishing method for petroleum-based fires,” according to the Civil Engineer Center.

But 3M stopped manufacturing the compounds in 2000 and DuPont has since come up with a new formulation. In 2012, the EPA added PFAS to its list of unregulated contaminants that may be hazardous to human health.

In August 2016, the Air Force began replacing the original firefighting foam with a “new, environmentally responsible … foam.” The Civil Engineer Center reported that 173 of 176 bases have transitioned to the new foam.

Some experts worry that the new foam is similar in chemical composition to the old. And even with the old compound no longer being produced, its chemical structure is such that it can stay in its environment – whether that’s a person or a body of water – for decades.

The chemicals are still being found, even in communities where the use of AFFF has been discontinued. And the chemicals can accumulate as time goes on.

PFAS is not the only challenge facing Luke and Williams, both of which have been included on the EPA’s Superfund list of the most hazardous sites in the U.S. requiring cleanup. Luke came off the list in 2002, but the EPA said Williams is still on the list because “the most widespread and complex … cleanup remedy remains to be implemented” on the former air base.

In the meantime, if testing finds drinking water “with PFOS/PFOA levels above the EPA advisory, we take immediate steps to provide alternate drinking water supplies,” said a statement from the Civil Engineer Center.

Sen. John McCain, R-Arizona, said Thursday that the solution to the water contamination on military bases is to “test and fix.” Even though the Air Force alone has spent $154 million on inspection and mitigation of PFAS contamination, McCain said there’s still “plenty of money to test and fix.”

Lawmakers this summer added millions for environmental cleanup to the amounts requested by the Trump administration in the fiscal 2018 Defense budget bill this year. But first, the Pentagon has to understand the scope of the problem.

“It’s clear that what was thought to be a relatively confined problem is bigger than what we thought it was,” Rep. Dan Kildee, D-Michigan, told News21 this summer, after PFAS contamination was found at the former Wurtsmith Air Force Base in his district.

This report is part of the “Troubled Water” project produced by the Carnegie-Knight News21 initiative, a national investigative reporting project by top college journalism students and recent graduates from across the country and headquartered at the Walter Cronkite School of Journalism and Mass Communication at Arizona State University. For the complete “Troubled Water” project, visit troubledwater.news21.com.