“I cannot for the life of me wrap my mind around people who think that health insurance should be an optional right, some kind of present that you get because you have the money,” Bannister said at a news conference Tuesday.

Bannister was a single mother of two when she was diagnosed in 2001 with Stage 3 breast and colon cancer. With the help of Obamacare, she was able to get the necessary surgeries to remove the cancer and mitigate the chances of it growing back, she said. 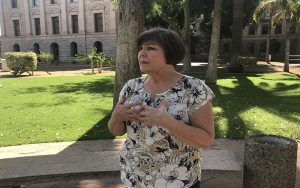 “If it weren’t for the subsidies, it would not have been affordable,” Bannister said. Last year, the premium without the subsidy was around $700 for her and her son, and this year it jumped to $1,200, not including deductibles, she said.

President Donald Trump’s latest plan to end Obamacare will result in one million people without health insurance and the increase in premiums across the country to be on average 30 percent, Rep. Ruben Gallego, D-Phoenix, said at the news conference. The order will eliminate subsidies to insurance companies that help low-income Americans afford health care.

“What a heartless administration we have that they are willing to cut premiums for the sole purpose of essentially destroying the legacy of President Obama,” Gallego said.

“There is no victory here, the only victory is in Trump’s mind,” he said. “Above all, the biggest loser is your everyday American citizen, working class person.”

Trump has proposed a swath of changes to Obamacare, such as slicing subsidies to health insurance companies for low-income customers and selling cheaper policies. Supporters say it could reduce costs by allowing businesses in the same industry to offer insurance and halts executive overreach from the Obama administration years.

Opponents of a Trump health-insurance plan raised signs to reflect their opinions at a news conference at the Arizona Capitol. (Photo by Shawna Truong/Cronkite News)

Bannister, a former member of the National Guard for the United States, said she couldn’t afford health insurance until the ACA came along.