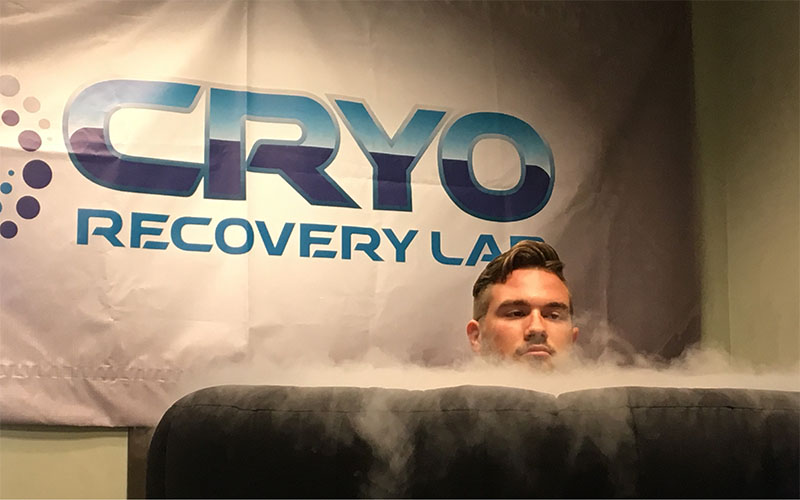 TEMPE — As Nick Crawford begins filling a chamber with fresh, oxygenated air, Brayden Smith puts on a robe and prepares for his weekly cryotherapy session at the Cryo Recovery Lab in Tempe.

It has become a routine of sorts for the senior defensive lineman at Ironwood Ridge High School in Tucson. After a game the night before, the 18-year-old college football prospect is back to address the soreness in his body and prepare for the upcoming week.

“I come up (here) to recover from all of the practicing and games, “ Smith said. “I need it for my body to recover and to be 100 percent by the next week and it relieves all of my pain and soreness.”

At a combine event in Phoenix earlier this year, Smith and his father met Crawford, the owner of Cryo Recovery Lab, and received their cryotherapy indoctrination.

Smith’s father, Joe Coty, overheard Crawford talking to other combine participants and was immediately intrigued by the concept.

“The days of older forms of healing I think are gone and you have to take advantage of the different opportunities out there,” Coty said. “If you can come up here and spend three minutes in a chamber and feel like you didn’t practice for the week, you can’t beat that.”

Whole body cryotherapy is a method of cold therapy that involves enclosing oneself in a controlled environment for up to three minutes with temperatures between minus-200 to minus-300 degrees Fahrenheit.

It was first utilized in Japan in 1978 to treat rheumatic diseases. Studies over the last two decades have established cryotherapy as a successful form of treatment for reducing symptoms of pain and inflammation associated with a number of chronic conditions. It also significantly aids in recovery time for athletes.

It is not without critics. The U.S. Food and Drug Administration released a report last year stating it “does not have evidence that WBC effectively treats diseases or conditions like Alzheimer’s, fibromyalgia, migraines, rheumatoid arthritis, multiple sclerosis, stress, anxiety or chronic pain.”
Aron Yustein, a medical officer in the FDA’s Center for Devices and Radiological Health, said that “based on purported health benefits seen in many promotions for cryotherapy spas, consumers may incorrectly believe that the FDA has cleared or approved WBC devices as safe and effective to treat medical conditions. That is not the case.”
It remains popular. Cryo Recovery Lab is currently one of nine locations in the Valley that offers whole body cryotherapy.

“You’re healing yourself from within with this mechanism,” Crawford said. “It kind of triggers the body into tricking itself to heal and it’s what I’ve found so beneficial.”

Akin to the aspirations that Smith has set for himself, Crawford used to be a collegiate athlete. Like many athletes, he battled injuries for most of his athletic career.

After becoming prone to injuries and spending an ample amount of time in the training room before practices and games, Crawford knew it was necessary to begin exploring other alternatives to healing.

“I found cryotherapy with a friend and went and did it in Dallas about three of four years ago,” Crawford said. “I got in there and my body hadn’t felt that great in years so for me, I began seeking it out when I got back here to Arizona.”

With an exercise science degree in applied kinesiology and Division I strength and conditioning experience, Crawford quickly found a recovery niche in the Valley.

From there, he made it a mission to spread the word and continue his enlightenment of cryotherapy and its many benefits.

“You have a lot of people who are training and performing at high levels but what are they doing to recover?” Crawford said. “I think about all of the athletes who came up and didn’t have access to (this) and I think about how much it could’ve helped them. My mission was to get out and figure out everything I could about cryotherapy.”

Parents like Coty can sometimes be receptive to new forms of treatment like cryotherapy for their children. But from the first introduction, the benefits seemed to greatly outweigh the drawbacks.

“Playing football, practicing five days a week and then playing a game, you really have to take care of your body,” Coty said. “You’re sore and then you play in the game, your body begins to break down and you have to have a way of recovering. When we found out about this it was really a no-brainer.”

For Smith, it quickly became the new normal. Once he realized that a three-minute session of cryotherapy would allow him to practice during the week injury-free and without inflammation in the body, the decision was simple.

And his father helped support him in the process.

“There are people who would want to rest and take a week off but for today’s athletes, you don’t have time for that,” Coty said. “You have to recover your body quickly and this is a great way to do it. It’s become a routine now. He practices and plays and we know that at the end of the week, we’re coming up (here) for recovery.”

The chamber at Cryo Recovery Lab is kept in a room of its own and sits about a foot off the ground. As the chamber fills with cold air, Crawford takes the person’s blood pressure before they step into the chamber. If they are more of a sedentary individual or their activity level isn’t high as opposed to someone fit and in good physical shape, their blood pressure is measured to make sure they are within a certain range.

Before they step foot into the chamber, the baseline level of their skin temperature is also taken and monitored with a laser thermometer.

Once in the chamber, a person will spend anywhere between a minute to three minutes, stretching or moving the area of their body around that is in need of healing.

“Typically with a cryotherapy session we want your skin to get about 30 degrees colder than normal — your skin typically sits around 90 degrees,” Crawford said. “We try to monitor your temperature while you’re in there so if we see that you’re getting too cold, we’ll stop the session and get you out and make sure that you’re warming your body back up.”

In a world where opiate use is at an all-time high and access to cortisone injections are common for athletes, the benefits of natural alternatives are being paid attention to much more closely.

As for Smith and Coty, the facts are there in the form of noticeable results. But for Crawford, it’s all about continuing to inform others.

“You have some of the most elite athletes in the world using cryotherapy on a daily basis,” he said. There isn’t a lot of science out there on it yet.

“But the proof is in the pudding.”