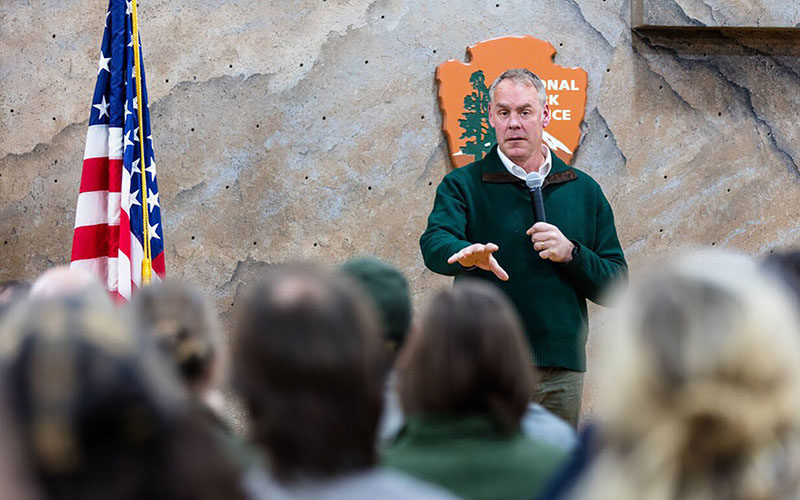 Interior Secretary Ryan Zinke at Grand Canyon National Park vowed to tackle the workplace culture at the National Park Service that allows harassment of workers, which he called a “significant problem” for the agency. (Photo courtesy the Department of the Interior)

WASHINGTON – The National Park Service has a “significant problem” with harassment of its workers, a culture that is going to change starting “here and now,” administration officials promised Friday.

Nearly half of the service’s 18,550 employees responded to the survey earlier this year, and 38.7 percent of those who responded said they experienced some form of harassment in the preceding year.

The largest percentage of complaints was for age or gender harassment, followed by sexual harassment, which was reported by 10.4 percent. Just under 1 percent said they experienced “sexual assault related behaviors.”

“A culture that tolerates harassment … is absolutely unacceptable,” Zinke said in a conference call with reporters, particularly at the national parks, which he called the “face of the Department of Interior.”

Zinke called on the Park Service to “root out this virus,” and said he has the support of President Donald Trump.

“From the president and myself,” he said, the harassment “stops now.”

On the same call, acting National Park Service Director Mike Reynolds apologized to park employees and to the American people, promising that change is “going to start here and now” and that officials are “clear-eyed and focused” on making those changes.

Grand Canyon National Park Superintendent Chris Lehnertz said on the call the survey shows that “trauma is real” and that the isolation of national parks can magnify abuse of power. In fact, she said, harassment has been reported in many parts of the Grand Canyon.

Zinke called it “absolutely appropriate” to confront the problem from the Grand Canyon, one of the nation’s most popular national parks.

Other categories cited in the survey included harassment based on racial or ethnic background, religious beliefs, sexual orientation and perceived or actual disability.

All three emphasized the importance of facilitating difficult conversations among employees, and particularly changing the culture on the local level.

That culture, Zinke said, has not included an emphasis on accountability in the past, when he said it was clear that action was not being taken against harassers, that there was little documentation and that employees were simply transferred rather than disciplined.

But Lehnertz said that in the last 18 months, seven Grand Canyon employees have retired or resigned because of sexual harassment complaints and two have been terminated. Reynolds said he knows of at least two terminations elsewhere in the Park Service and Zinke said he has fired four employees himself in recent weeks.

Zinke said he will ask Congress to let the service “give frontline superintendents more authority” to act quickly when cases of harassment are brought to their attention.

Rep. Raul Grijalva, D-Tucson, in a prepared statement Friday, agreed that Congress should be involved in the issue, but that includes “a responsibility to ensure that Secretary Zinke takes command of ending sexual harassment.”

Grijalva also criticized Zinke for the timing of his announcement.

“Dumping this news on a Friday afternoon, without any clear next steps, suggests this administration still isn’t taking this problem as seriously as it should,” he said.

He said that changing the agency’s culture requires Zinke to make this “a genuine priority.”

Zinke said it is.

“You have to take action,” he said. “That’s clearly what we intend to do.”