The trend has flourished in densely populated cities such as New York and Seattle. Some smaller communities – such as Spur, Texas – have embraced the movement as well.

Despite the growth, the trend has struggled to gain a significant foothold in Arizona. One tiny house builder said his company has built 10 tiny houses since 2015, and most of those went out of state. In terms of more permanent micro-housing communities, such as “container” and studio apartments, there are only a handful of examples in the Phoenix metro area.

Tiny housing, sometimes referred to as micro-housing, generally refers to a house or small living space that is typically more than 300 square feet but less than 500 square feet, according to the Urban Land Institute.

Mark Stapp, a real estate and development expert at Arizona State University’s W.P. Carey School of Business, said the idea of cost savings from tiny housing appeals to people, but he still doesn’t think there’s a strong future for it in Phoenix.

“We don’t have the scarcity of space like San Francisco or New York has,” Stapp said. “I don’t see there’s going to be demand.”

Stapp said developers in the Valley can still build housing in less dense, cheaper areas. He said there are just too many housing options in Phoenix to make small living the mainstream choice at this point.

Stapp said that despite the lower cost overall for tiny housing, it might cost developers more per square foot to build these smaller spaces.

Benjamin Hall, architect and developer of White Stone Studios off Roosevelt Street and Eighth Avenue near downtown Phoenix, said it wasn’t easy getting the tiny set of apartment units off the drawing board. 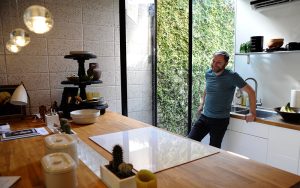 “By being a small developer, I’m up against the wall,” Hall said. “There’s no incentive to get city help.”

“In a way, the scale is too small (for local city government) to take interest in,” he said. White Stone Studios’ rentable units are less than 600 square feet.

Hall began his commercial venture in 2011 after the Great Recession, and he said White Stone Studios was the first tiny commercial housing project in Phoenix.

It paved the way for other projects, such as the modified shipping container housing units on both Grand Avenue and on Portland Street, by familiarizing city officials with the idea of smaller development projects.

“I wasn’t sure if this was going to work,” he said.

Because Hall wasn’t an established developer and was asking for rental rates comparatively higher than the rest of the area, he said construction loans were nearly impossible to come by after the recession, forcing him finance the venture independently.

“No one would talk to me. Banks wouldn’t talk to me,” he said.

He said the company has only sold three individual tiny houses in Arizona. The houses are built on custom wheeled trailers and range from 150 to 350 square feet, but they don’t meet housing code requirements such as minimum ceiling height.

“It’s not a house. It never will be a house,” Partanna said. “I always tell people to treat (a tiny house) as an RV.”

Because it’s not technically a house, people can’t finance it through a home mortgage, he said.

“We would have sold 50 in the last two years if people could get financing,” he said.

Christoph Kaiser, Phoenix architect and design firm owner, knows a thing or two about tiny house development. Kaiser’s Garfield neighborhood grain silo tiny home where he and his wife lived for a year and a half has appeared in publications such as Today and Curbed.com.

Kaiser said he faced legal hurdles building the unconventional project, such as getting it registered as a residence in a historic neighborhood.

“The amount of paperwork and bureaucracy we have to tread through is the same for a master bedroom or bathroom addition as if you’re building a 4,000-square-foot house,” he said.

In a commercial sense, if a property owner builds 500 consistent units, the development cost is spread out over greater numbers compared to just a handful of tiny units.

Whether a tiny residence is mobile or permanent makes a legal difference as well.

Kaiser said many cities don’t allow mobile structures on a plot of vacant land without a permanent foundation, and they need to comply with regulations such as grading and drainage.

Hall said city regulations governing permanent housing construction also might impede smaller projects, “specifically fire code issues … there’s a threshold where you have to provide fire sprinklers, which is a very expensive thing to do.”

Hall said smaller builds may need to meet parking requirements as well, which could kill a project.

Despite the challenges of developing the project, Hall said he has a waiting list of people looking to move into White Stone Studios.

Other projects are in the works. Phoenix officials recently agreed to give tax breaks to a micro-apartment high-rise planned for Roosevelt Row. The 19-story building will feature units that average 400 square feet, according to azcentral.com.

Kaiser and his design firm are working on a tiny housing project they call the “kbox,” using a modified shipping container as a base, with an emphasis on affordability, quality and portability. He said he intends to release the new project to the public in January. 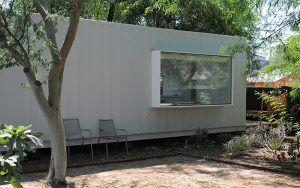 Christoph Kaiser has a prototype of his proposed “kbox” tiny housing project. He plans to make the project details public in early 2018. (Photo by Jesse Stawnyczy/Cronkite News)

“My main interest in small architecture is the product aspect, that you can potentially bring the same sort of tailoring and ergonomics to architecture as people bring to the automobile industry,” Kaiser said.

Kaiser said he envisions small living as both a means to spread out away from the city into areas where conventional housing might not be practical, but also to revitalize areas of Phoenix.

Partanna said Uncharted Tiny Homes is growing as a small business, and the company is working on three new tiny home builds.

“There’s a lot of interest here,” he said, “but a lot of people are finance challenged.”

Partanna said he plans to register his company as an RV manufacturer, which would allow potential customers an easier way to obtain financing for their tiny home because the builds would fall within a legal classification.

Stapp said he would definitely call tiny housing a niche market compared to the rest of Arizona real estate, but he said there might be greater interest as downtown and other areas become more densely populated.

“Developing in urban areas is going to push the envelope for demand of small spaces,” he said.

Why do people choose to live smaller?

Stapp said the part of the appeal of tiny housing lies in potential cost savings as housing prices increase.

In March, Zillow estimated that Phoenix home values had increased about 9 percent over the previous 12 months, and analysts predicted they would rise 3.5 percent within the next year, according to the Home Buying Institute. As of March, the median home price in Phoenix was slightly more than $200,000.

But there also might be a “cool” aspect to micro housing, an X factor that draws people away from the typical and toward the quirky.

“We can live comfortably in small spaces,” Stapp said. “For some, it may be a lifestyle choice.”

James Smith, an Arizona native who has lived in White Stone Studios since May, said he wanted to live somewhere well built and design conscious. 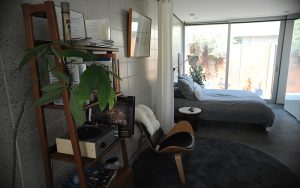 Smith said he liked the thought of being closer to restaurants and nightlife of downtown Phoenix.

“There certainly are challenges in small living. We need to be thoughtful and objective about what we have in our homes,” he said. “That was a new idea to me.”

Smith said the reduction of clutter and decrease in cost of living were positive changes.

Hall said it’s crazy to see what development and progress has happened within the last few years in Phoenix, and he’s curious to see where the future leads.