PHOENIX – In the past decade, nail art has become one of the hottest trends in the nail care industry.

In fact, more than 85 percent of the salons surveyed nationwide offered nail art, which includes everything from hand painted art and Swarovski crystals to chrome nails, according to NAILS Magazine 2016-2017 statistics. Nail art photos also were among the Top 5 most-tagged items on both Pinterest and Instagram.

Phoenix native Sarah Waite, a nail technician who works out of the Spa at Camelback Village, has helped lead the nail art charge. 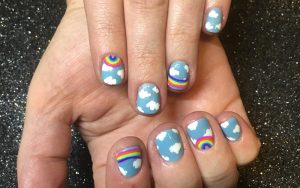 Phoenix native Sarah Waite’s blog and accompanying social media accounts have garnered hundreds of thousands of fans. People follow the designs Waite creates, like this one she did for client Erin Bauer. (Photo by Tim Johns/Cronkite News)

Several years ago, the 28-year-old founded her own nail art blog called Chalkboard Nails to showcase some of her favorite creations from her newfound hobby.

The blog and accompanying social media accounts have garnered hundreds of thousands of followers. She has 260,000 followers on Instagram alone, and she features everything from Disney characters to animals and holiday designs.

The success of Chalkboard Nails has opened up opportunities for Waite.

“I co-authored a book called ‘Pretty Hands and Sweet Feet,’” she said. “I judged a competition for Sally Hansen in New York City. I’ve been on TV.”

This attention has allowed Waite to help promote her brand and expand her audience. She cites social media as well as word of mouth and referrals as ways in which she has steadily built up a loyal clientele.

“They see something they like, and they come in to see me because of that,” Waite said.

For her services, Waite said it depends on what the client wants that determines how much she will charge. 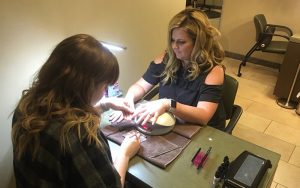 “Pricing nail art can be tricky. If someone is just doing a couple of accent nails, I usually price per nail,” she said. “Depending on the complexity, it can range from $3 to $10 for something like a portrait. If someone is doing a design set on all 10 nails, then I usually price as such, rather than breaking it down per nail, and that will usually range from $15 total to $40 total additional.”

The prices are worth it to Erin Bauer, one of Waite’s clients.

Bauer said she finds it easy to see why people have fallen in love with nail art in recent years.

“For me, it’s a way to express myself. It’s just more fun than a plain color on my nails,” Bauer said.

And for Waite, that form of individual self-expression is what it’s all about. It is, after all, the reason she initially started Chalkboard Nails.

“Don’t be afraid to try something new and maybe push yourself a bit style wise and see if you like that vibe,” she said. “And then if you don’t, it comes off.”