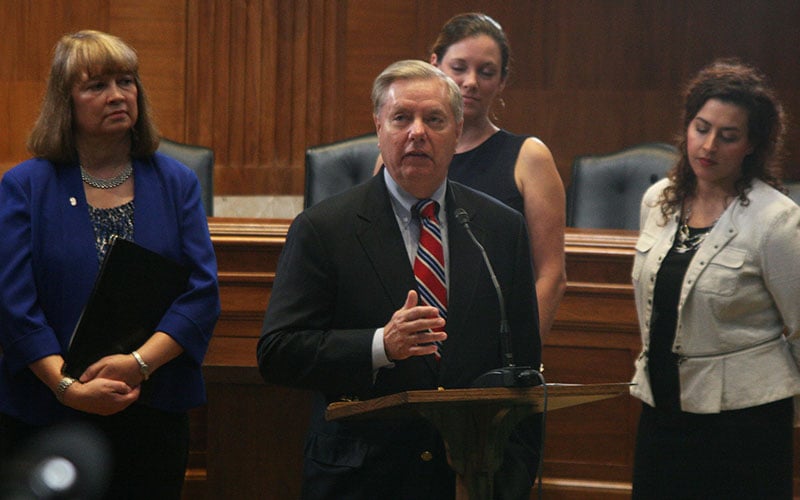 Sen. Lindsey Graham, R-South Carolina, backed by pro-life advocates, promised a vote “sooner rather than later” on the Pain-Capable Unborn Child Protection Act, which has faltered in the Senate in recent years when it failed to get a vote. (Photo by Joel T. Vernile/Cronkite News) 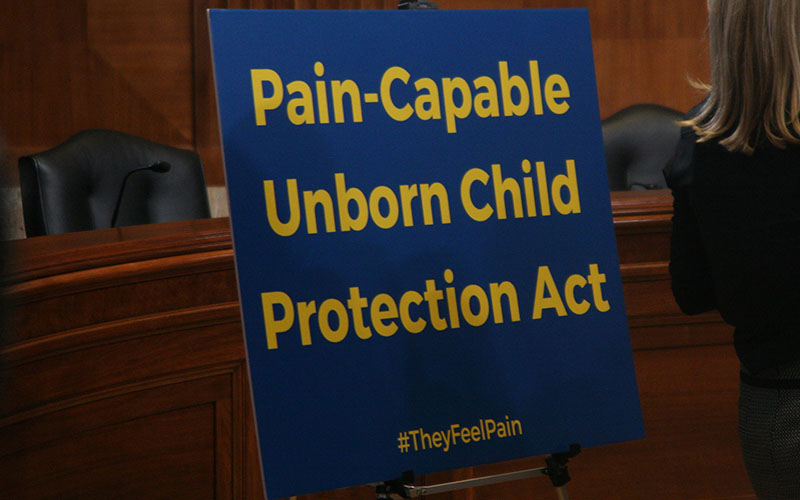 The Pain-Capable Unborn Child Protection Act, sponsored by Rep. Trent Franks, R-Glendale, would ban abortions after 20 weeks except in cases or rape, incest or a threat to the mother’s life. But critics point to restrictions on thhose exceptions. (Photo by Joel T. Vernile/Cronkite News)

WASHINGTON – Sen. Lindsey Graham, R-South Carolina, on Thursday promised a vote “sooner rather than later” on the Pain-Capable Unborn Child Protection Act, which passed the House earlier this week but has regularly died in the Senate.

The bill, sponsored by Rep. Trent Franks, R-Glendale, would ban abortions after 20 weeks, except in some cases of rape, incest or a threat to the life of the mother.

In a Fox News op-ed Wednesday, Franks urged Senate leaders to “put aside their … asinine” rule requiring 60 votes to cut off debate on a bill – a tactic that has been used in the past to block it in the Senate.

But Graham was optimistic at a news conference Thursday where he was flanked by pro-life groups that said the public supports the bill, as does the president, which was not the case with then-President Barack Obama in 2015 when a similar bill hit the Senate. At the time, he said, three Democrats crossed the aisle to support the bill and he thinks the Senate is “marching toward” 60 votes that would allow for an up-or-down vote on the underlying bill.

“I expect the bill to pass with 60 votes over the arc of time as we persuade more and more Americans we’re in the wrong club,” Graham said, referring to the nations that allow abortions after 20 weeks, a “club” that includes North Korea and China among others.

Advocates say 198 nations do not allow abortions after 20 weeks of gestation.

“What we’re trying to accomplish here is to get America out of a club of seven nations that I don’t particularly want to be in,” Graham said.

Pro-choice activists said they do not take any pro-life legislation lightly, but said supporters of the “pain-capable” bill are going to once again have a difficult time getting the 60 votes needed to move the bill forward.

Planned Parenthood Arizona spokeswoman Tayler Tucker said that the type of abortion the bill would prohibit is “extremely rare,” with 99 percent of abortions done “before the 20-week mark.” Those done after that threshold are done because of medical emergencies, a decision she said should be left to women and their physicians.

She said the law would be “another intrusion” by lawmakers who “don’t know these people’s circumstances.”

Frank’s bill includes exceptions for incest, rape or risk to the life of the mother, but they are what Tucker called the “quote-unquote exceptions” to the ban, noting that they take the mother’s life into account but say “nothing about the health of the mother,” for example.

“Is it really the place of legislators who have no clue or personal experience with this issue to step in between women and their healthcare?” Tucker asked.

She said that if the bill does pass, it will be challenged in the courts, which have overturned similar state bills as an infringement on a woman’s right to an abortion that was recognized by the Supreme Court’s 1973 Roe v. Wade ruling. That case does not specify a timeframe in which a pregnancy can no longer be terminated.

But Graham said he thinks Roe v. Wade can work in his favor, because it presents “a state interest when the fetus becomes viable.”

“We’re trying to convince the courts that legislative bodies like the Congress and at the state level have a legitimate compelling state interest to protect a child at the fifth month of development from excruciating pain that would come from an abortion,” Graham said.

Before it can get to court, however, the bill needs to get out of the Senate.

Franks on Wednesday said that Senate Majority Leader Mitch McConnell should force an up-or-down vote rather than let the bill “disgracefully languish in the Senate” and “allow this insidious and unthinkable carnage to continue.”

Graham rejected the idea of trying to circumvent the filibuster, saying the best way to pass the bill would be to “build consensus.”

“During the Obama years there was a pretty radical pro-abortion agenda that was stopped time and time again because of the 60-vote requirement,” he said.

While he would not predict success, Graham said he is “100 percent confident” the issue would make it to the floor in this session of Congress.