PHOENIX – A national study warns that youths, some as young as 8 years old, are getting tattoos and body piercings that risk their health.

The American Academy of Pediatrics study said tattoos and other body modifications are becoming more common among adolescents and young adults. One out of ten high school students surveyed had a tattoo, with 55 percent interested in getting a tattoo.

The study says pediatricians should tell patients of the potential pitfalls, which include negatively impacting a career and health risks such as infections and high-risk disease.

“Pediatricians should advise adolescents to seek medical care if there are signs and symptoms of infection. Normal skin and soft tissue infections should be considered first, but if there are any unusual features, prompt evaluation by a dermatologist is recommended,” the study says.

“Some of the risks, for example, include irritation and inflammation and that comes as a result of either a reaction to the pigment, or anything that may have been added to a pigment,” he said. “The other real risk is infections” that can range from minor skin infections to abscesses.

He also noted there have been documented cases for blood infections, heart valve infections, and even diseases as severe as HIV and Hepatitis B or C.

Several states have few restrictions on the age of someone getting a tattoo – the national study said teens with tattoos get them on average at around ninth grade. Arizona law requires people younger than 18 to have a parent’s permission to get a tattoo and to have the parent or legal guardian there when their child is getting it done.

Mikey Sarratt, a tattoo artist who owns High Noon Tattoo Parlor, believes that a tattoo is not something a minor is ready for, so he does not allow anyone under the age of 18 to be tattooed at his business. 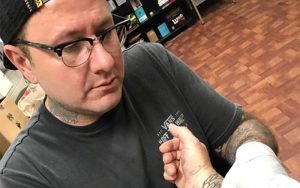 Mikey Sarratt, who owns a tattoo parlor, said people shouldn’t get them at a young age. He got his first tattoos at age 17 or 18 and “I regret them every day.” (Photo courtesy of High Noon Tattoo)

“I don’t think there is a mental capacity there to really truly take that on – to take on the responsibility of a tattoo, a lifelong tattoo, at that age,” Sarratt said.

The study advises pediatricians to help their patients understand the commitment they are making when they modify their body. According to the study, a 2014 survey of nearly 2,700 people found that 76 percent of those surveyed thought tattoos and piercings had a negative impact on them getting a job, and 39 percent believe workers with body modifications reflect poorly on their employers.

Sarratt said he advises young adults that come into his business for a tattoo not to get anything they can’t cover up.

“You don’t know what you’re going to do with the rest of your life,” Sarrat said. “It’s going to close doors instead of open them.”

Chulani said although tattoo removal is available it rarely works as well as people want.

“While removal happens and removal exists, research shows that young people probably overestimate how easy or how effective removal is. Removal is costly, removal is difficult and removal is only partially effective,” Chulani said.

Chulani and Sarratt recommend anyone who is considering getting a tattoo should go to a licensed tattoo business, understand the care a tattoo requires to heal properly and realize the health and career risks of getting a tattoo.