And airport officials say the work is paying off.

The group surveyed nearly 35,000 North American domestic travelers and asked about everything from airport accessibility to security checks. 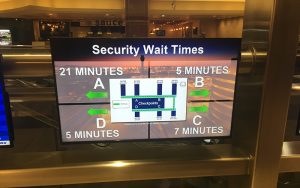 Heather Lissner, a spokeswoman for Sky Harbor, cited the airport’s emphasis on creating a happy customer experience as one of the reasons for the jump.

“Customer service is one of our top priorities after safety and security,” Lissner said.

During the past decade, the airport has invested heavily in improvements, including adding PHX Sky Train to connect the terminals, parking and light rail. The city approved a $590 million, five-year project to modernize Terminal 3. It also added interactive directories, new restaurants and retail and the ability to check wait times for security lines.

Lissner said posting TSA wait times on the airport’s website and on monitors was especially important for Terminal 4.

“More than 80 percent of our travelers come through Terminal 4, our busiest,” Lissner said. “They can go to any of the four security checkpoints. If they know what the wait time is, they can go to another one if it’s less time. They don’t have to wait.”

The airport contributed more than $12 billion to the economy in fiscal year 2016 and supported nearly 60,000 jobs, according to a study by the W.P. Carey School of Business at Arizona State University.

But the renovations didn’t come out of the city’s coffers.

“The airport’s funded through passengers. And basically, if you use the airport, you’re going to help pay for the airport,” Lissner said.

Some of the money spent on tickets, dining and retail within the airport go toward these renovations.

Brittani Koepke said she flies through Sky Harbor one to two times a year. She said the higher costs are worth it, especially when it comes to the self-service ticket kiosks installed last year. 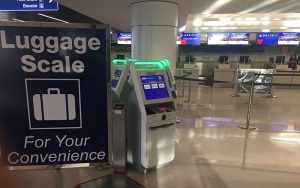 “Actually, the kiosk is really good because then you don’t have to stand in line, which can take a really long time especially if you’re in a hurry,” Koepke said.

More than 120,000 passengers arrive and depart from the airport every day, according to Sky Harbor’s website.

To make it easier for passengers to get from the terminals to the rental car center, the city is planning to extend PHX Sky Train in the near future. The Phoenix City Council approved a $950 million plan to fund the extension, and officials expect to complete it in 2021.