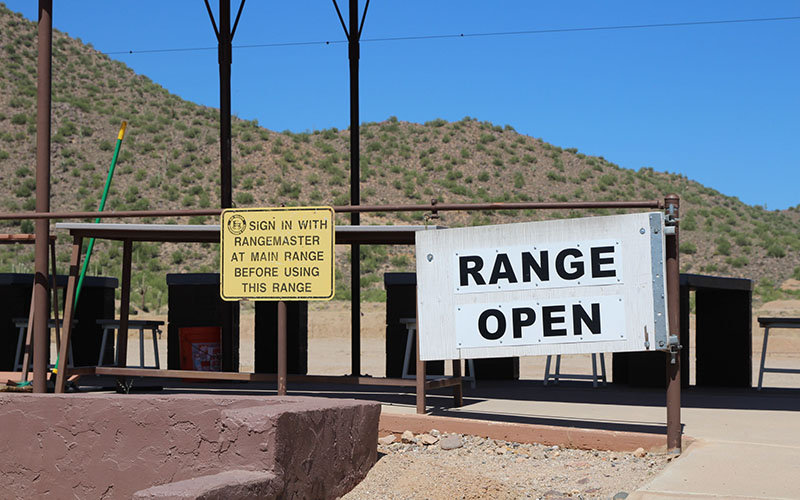 A sign stating that the range at Rio Salado Sportsman’s Club is open lines the rails to one of the shooting stations. (Photo by Alyssa Williams/Cronkite News) 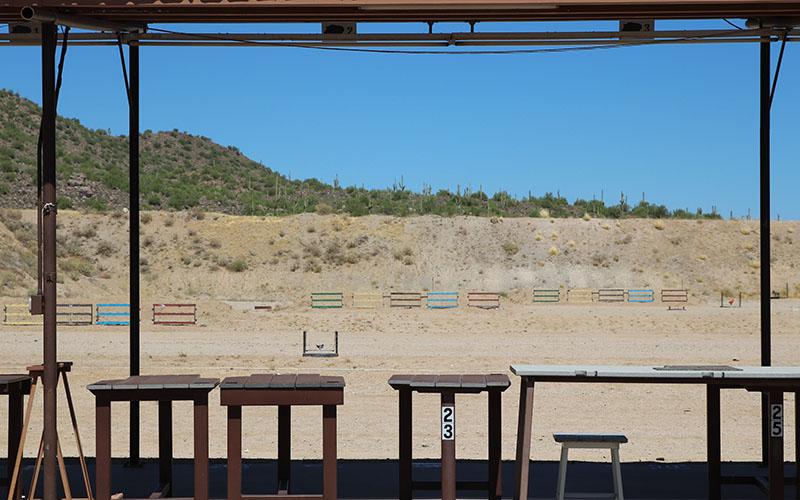 Club members utilize the colorful targets that line the base of Usery Mountain. (Photo by Alyssa Williams/Cronkite News) 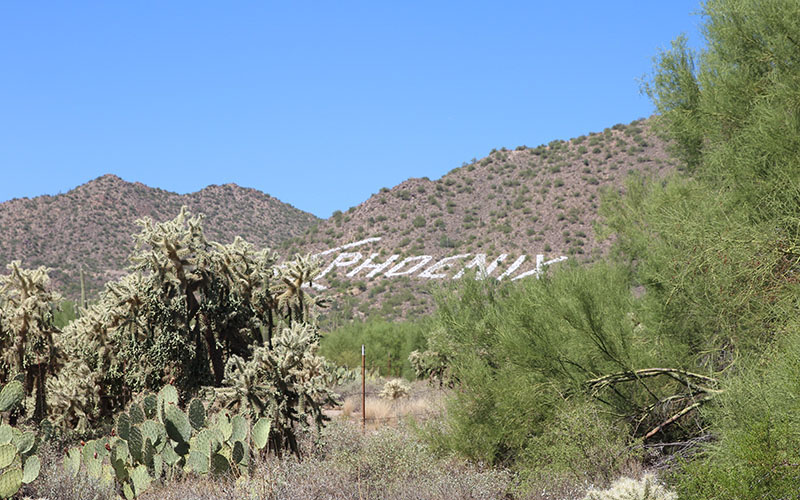 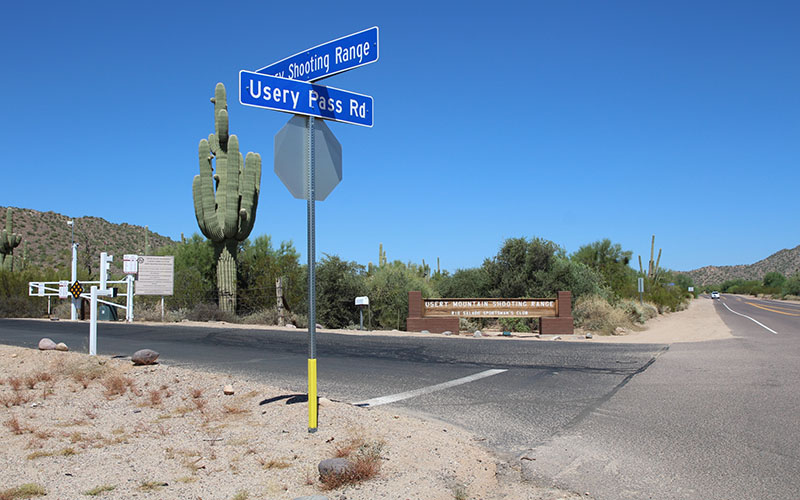 The Rio Salado Sportsman’s Club overlooks Usery Mountain in Mesa, and four-year member Frank Goff said it is home to one of the largest air rifle clubs in the country. (Photo by Alyssa Williams/Cronkite News) 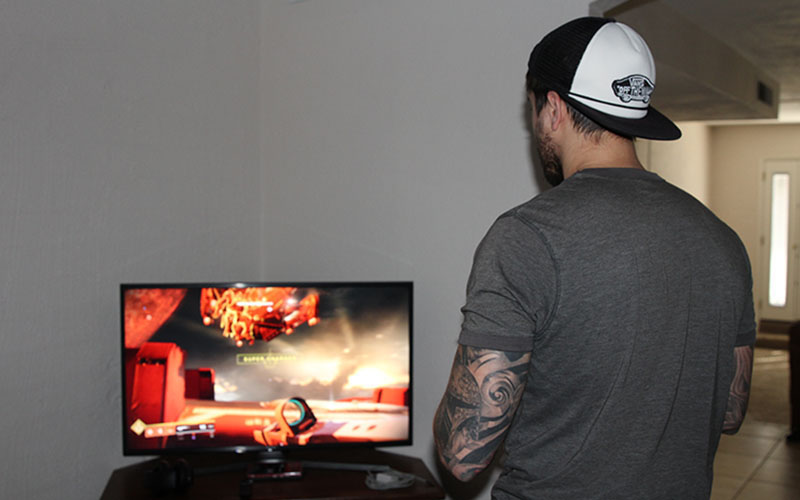 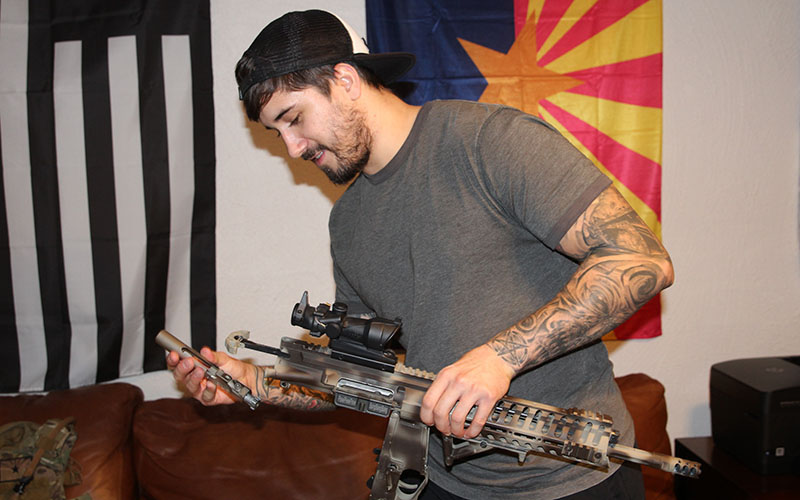 Bobby Golbach highlights the intricacies of his Patriot Ordnance Factory P415, one of seven guns in his collection. (Photo by Alyssa Williams/Cronkite News) 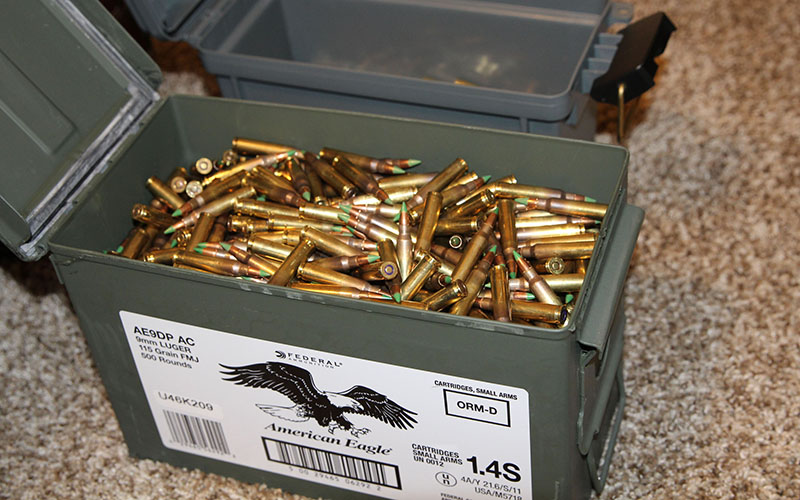 A bucket of 9mm Luger ammunition is one of the two buckets of ammo Bobby Golboch has stocked. (Photo by Alyssa Williams/Cronkite News)

“Americans never know which way the government is going to be going,” said Frank Goff, a member of the Rio Salado Sportsman’s Club shooting range in Mesa.

During former President Barack Obama’s term, Goff said there was a “perceived threat to the right” regarding the ownership of weapons and gun control.

The Obama administration’s primary focus was to enforce licenses for gun owners, reduce the selling of guns through the internet and enforce background checks on future gun owners.

There were approximately 85,000 more background checks performed last year in Arizona than in 2015, according to FBI statistics.

“People go crazy and start hoarding, which is good for the gun industry,” Goff said. “There’s a comfort with Trump’s administration.”

In Trump’s first 100 days in office, he signed a bill adjusting the regulation on gun background checks, and is currently paving a way for easier gun exports from the United States.

According to the Pew Research Center, 67 percent of gun-owning Americans claim to own a weapon for personal protection.

“I would say that most of my friends have a gun, and carry it on a daily basis for safety,” Bobby Golbach, a gun enthusiast, said while playing Destiny 2, a first-person shooter video game in his Litchfield Park home. “They’re not carrying it because they live in bad neighborhoods or are expecting for something bad to happen to them. It’s the fact that it’s your right to protect yourself.”

A study done by Pew Research Center indicates that 66 percent of U.S. gun owners own more than one gun.

About 59 percent of all gun owners have taken safety courses and believe that taking courses is vital to ownership.

“I have taken my CCW class, Concealed Carry Weapons permit, just in case I have one of my guns in my car and get pulled over, I have proof that I’m licensed to carry,” Golbach said.

Golbach, who owns seven guns, said there is a level of “knowledge and understanding” that goes into owning a gun.

“There is definitely a collector’s aspect in my gun purchases,” Golbach said.

Despite the gun purchasing decline, the shooting club added more than 600 new members to its roster in August 2017. The club currently accommodates about 6,000 members.

Lagusis said the club’s main priority is safety, and it’s mandatory for every new member to watch a safety video regarding the club and gun security.

“We run a real tight ship here,” Lagusis said. “You mess up, you go home.”