Anti-Semetic hate crimes have been on the rise in Arizona. Vandals spray painted swastikas on the home of a Jewish political candidate in Pinal County. (Photo Courtesy of the Arizona Anti-Defamation League)

PHOENIX – A woman woke up one morning and found the menorah adorning her yard had been twisted into a symbol of hate overnight: a swastika.

Some might think this happened in Nazi Germany in the 1940s, but no. This particular act of hatred took place last December in Chandler.

Incidents of hate crimes involving Jewish victims have more than tripled in Arizona since 2015, according to the Anti-Defamation League, or ADL. In addition, they also reported an assault for the first time in more than two years.

Carlos Galindo-Elvira, the Regional Director for the Arizona office of the ADL, said the uptick in hate crimes over the past couple years is real, particularly in the Scottsdale area. He said they reported four total incidents in 2015, but have already dealt with 14 cases so far in 2017. 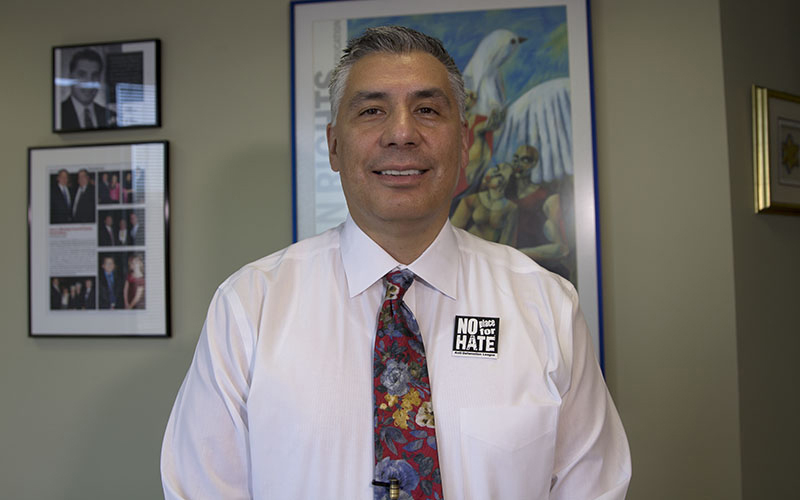 Carlos Galindo-Elvira, Regional Director of the Anti-Defamation League, says hate crimes are on the rise in Arizona. (Photo by Andrea Jaramillo Valencia/Cronkite News)

“People still may say that 14 doesn’t sound like a lot but those are 14 reported, we don’t know what the unreported number is that we would add to that,” Galindo-Elvira said.

He added that when people engage in hate against certain races, genders, or sexualities, anti-Semitism is not far behind.

“The 2016 election was both emotional and high spirited and many things were said. Some of the hateful rhetoric that was used certainly invited in other forms of hate,” he said. “We’re dealing with the genie out of the bottle.”

While the ADL is a Jewish organization, Galindo-Elvira said they will continue to partner with other groups and law enforcement to defend equality for all.

“Our purpose is many-fold,” he said. “Always being the leader in the fight against anti-Semitism, but we know that other hates exist. Other prejudices exist and we want to shrink the space for the hatemongers and those that seek to divide our community and our country.”

The ADL only reports the numbers of people who have directly contacted them, but statistics from the FBI also indicate the numbers of hate crimes may be on the rise throughout Arizona. The numbers include hate crimes related to race, religion, sexual orientation, ethnicity, and disability.

In 2014, there were 265 total hate crimes in Arizona. In 2015, there were 276 reported. The most recent data provided from the FBI is from that year, but a new report is expected to come out sometime this November.

Naomi Ellis and her family were the victims of that hate crime in December 2016. Four people twisted the eight-foot menorah in her family’s Chandler yard into a swastika shape.

She said the incident gained traction after she posted about it online.

She said that she received many positive private messages and letters after the incident — more than 100 from all over the world, including Israel — but she also saw many negative, hateful comments online about it.

Three of the perpetrators caught were under 18 and still in high school. Looking back now, Ellis thinks the incident came from a place of ignorance, not hate, and that they did not actually have hateful feelings toward Jewish people specifically.

“Once they figured out the significance of what they had done, they had so much guilt about it. The truth is, they just didn’t get it,” she said. “It’s horrible to think that. How did you not know that a swastika pretty much means death and murder?”

The case has already gone to court and during that time, Ellis said she forgave the three juveniles involved during their trial.

She said the event reminded her of the importance of teaching her own kids to understand other backgrounds and that it helped spark a conversation about hate symbols.

Ellis plans on putting up a menorah again this year and said she feels recovered.

“I think the community sees it as a force of light and a force of good,” she said. “Putting it up and staying is important to remind everyone about the sanctity of religious symbols.”

Sarah Winkelman, the president of Jewish Arizonans on Campus at Arizona State University, said she doesn’t necessarily feel discriminated against, but that many people simply do not understand Judaism and her practices.

“It’s really annoying, in general, because I feel like I’m really informed on all the other religions,” Winkelman said. “It’s hard that other people don’t do the same for me. There are so many opportunities to learn, so it’s hard for me to understand why they don’t want to learn about other people’s cultures.”

While she said that nothing has directly happened to her, she said she knows people both in Arizona and back in her hometown of Chicago who have experienced vandalism.

She said she sometimes takes precautions depending on the situation or location she is in.

“I’m very proud to be Jewish,” Winkelman said. “But there are some circumstances for sure that I take my ring off or I’ll put my necklace under my shirt or if I’m going somewhere I’m not super familiar with or comfortable with, then I’m not as outright with my Judaism.”