From clenching a fist to taking a knee, sports, social issues on perpetual collision course

PHOENIX — After a weekend of political protests in the sporting world, Phoenix Suns coach Earl Watson said the attention athletes place on social issues can accomplish only so much unless there is significant action behind it.

From speaking to Phoenix Police officers and local politicians to participating in multiple Suns charitable organizations and events, Watson preaches positive energy and activity to his players, in hopes of bringing the community together rather than promoting conversation that pulls people apart. 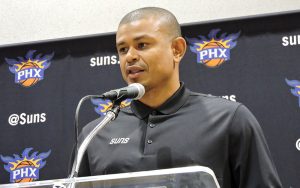 Phoenix Suns coach Earl Watson said it is important to act on social justice, and not just protest. (Photo by Eric Newman/Cronkite News).

“It’s easy to stand up and say what we need to do, but get involved in your communities and make the difference,” he said.

As Phoenix Suns players and staff spoke about the upcoming NBA season at the team’s official media day, it was impossible to escape the prevailing social justice issues and focus solely on basketball.

Controversy began when Friday, when, at a political rally in Alabama, President Donald J. Trump said NFL players who kneel during the National Anthem to protest a number of social inequalities, should be fired. NFL owners, athletes and staff immediately reacted with widespread condemnation on social media and in every NFL game on Sunday. Some players chose to kneel during the anthem, others locked arms, and three teams chose to stay in the locker room while the song played.

In addition to criticizing NFL players, Trump tweeted at Golden State Warriors point guard Stephen Curry, who went public with his disinterest in visiting the White House to celebrate the team’s recent NBA championship. That brought a response from LeBron James and numerous other NBA players. Trump then tweeted that the team was no longer invited to the White House.

However, as Suns forward Jared Dudley put it, the argument, especially between millions of people on social media, on whether kneeling during the anthem is acceptable, is missing the point of the protests.

“I think that what’s getting lost into the whole thing is why he (Kaepernick) was kneeling. And we don’t really talk about that enough as we should be,” he said, adding “when it came to this, you saw players trying to take a stand.”

He said athletes, particularly in the NBA, are well-educated and more willing to speak up than ever before – especially on social media.

ASU sports historian Victoria Jackson said the practice of athletes speaking out is nothing new. As early as the 1960’s, athletes such as Muhammad Ali and others spoke out regarding the civil rights movement and anti-war sentiments. Jackson said athletes have used their platform and status to represent sentiments from those oppressed and without a voice.

“The platform of sport has always been a space to advocate for social justice, because it’s a contested space,” she said. “So athletes, especially athletes from a diversity of backgrounds, have gained access to that space, have used it, taken advantage of the opportunity as a way to call attention to ongoing inequality and social injustices.” 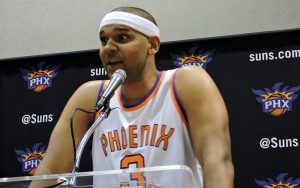 “I think that what’s getting lost into the whole thing is why he (Colin Kaepernick) was kneeling. And we don’t really talk about that enough as we should be,” Jared Dudley said. (Photo by Eric Newman/Cronkite News).

Suns general manager Ryan McDonough said the players understand the stage they occupy and the team encourages them to use it.

“Throughout the season with our players and coaches, it’s two to three media appearances a day, and obviously the news cycle now-a-days is 24-7,” he said. “I think it’s great if they use that platform for change.”

Jackson said the biggest stars in local sports are doing just that.

From Phoenix Mercury center Brittney Griner’s anti-bullying campaign to efforts by the Suns with their charities, including the renovation of 50 basketball courts around Arizona to promote healthy and safe neighborhoods, they are practicing what they preach.

“This is a movement, and to see it as something less than that I think is not giving athletes credit. They’re not just doing something that is symbolic, but they’re doing work off the field and off the court too,” Jackson said.