TEMPE – The typical college dorm doesn’t have 3-D printers, laser cutters and Bluetooth-enabled washers and dryers on-site. But the new Tooker House on Arizona State University’s Tempe campus touts the kind of technology and innovation the students living there hope to one day create.

The $120 million residential community houses 1,600 ASU students, largely from the Ira A. Fulton Schools of Engineering. The dorm received national attention recently after Amazon donated an Echo Dot to each student. Tooker House is the first voice-enabled residential community on a university campus, according to a news release.

It’s not unusual for large companies such as Amazon to donate technologies to universities with prominent engineering programs – the Fulton schools being the largest in the country with 20,000 enrolled students – to entice and eventually recruit engineering students.

The demand for engineers has steadily increased, said Jim Collofello, vice dean of academic and student affairs for the engineering schools. So much so, companies are offering engineering graduates signing bonuses above $4,000 and higher-than-average starting salaries. For example, the starting salary for an entry-level chemical engineer this year is $60,770 compared to the average annual wage in the U.S. of $49,630, according to the Bureau of Labor Statistics.

Collofello said these companies often look to ASU when hiring – partly because of the school’s mantra. 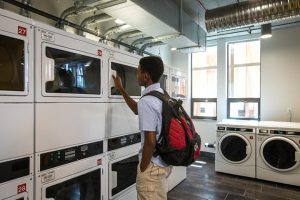 Residents at Tooker House, a dorm on Arizona State University’s Tempe campus, can be notified when their laundry has completed its cycle thanks to the Bluetooth-enabled laundry facilities. (Photo courtesy of Charlie Leight/ASU Now)

“ASU has a lot of great technology, but having that technology literally where you’re living I think is the key advantage,” Collofello said. “Companies understand that if they want to be able to hire our students, they can’t wait until they’re seniors. Within the Fulton Schools of Engineering, we like to say our students are engineers from day one. We want them to think like engineers, create in that engineering mindset, and that is easy to do in Tooker House.”

People often perceive gifts to college students for recruitment as a violation, but that only applies to student athletes, according to NCAA Bylaws. Tooker House spokeswoman Terry Grant said the bylaws that student athletes must comply with do not apply to other students.

Engineering students Stephen Hall and Carter Kwon have taken advantage of the technologies at Tooker House, and they both created components that pair with their Echo Dots.

“It is a really good opportunity to learn because this type of technology, I really do believe, is the future, voice-activated everything,” Kwon said. “Being able to get my hands dirty with that type of technology in such a unique environment where 1,600 people have it, was awesome.”

Kwon, a community assistant in the dorm, created a program that interacts with the Dot’s digital assistant, Alexa. If you say, “Hey Alexa, ask Tooker House what’s going on today,” Alexa will read off a list of events sent to the paired mobile phone.

“That’s what we know, programming, events, all the stuff going on here every day, so we wanted to create a central way to communicate because there is nothing. It’s really calendars on the wall that you rely on, or word of mouth, and none of those are efficient,” Kwon said. 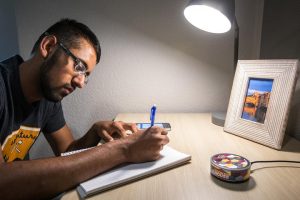 “Since everyone has one of these (Echo Dots) in their rooms, I thought it would be really cool for them to say, ‘Hey, what’s going on today?’ and have a list pop up.”

Hall, who also works as a community assistant in Tooker House, invented a technology he dubbed the “Magic Mirror,” a two-way mirror that displays the answers to prompted questions from the Echo Dot device.

“Carter (Kwon) saw the opportunity to learn how to program a skill, whereas I saw the opportunity to learn how to add onto that and make a more mechanical device with a more visual representation, something I’ve never played around with before,” Hall said. “Given the technology that Amazon, Tooker and ASU has provided us, we went out of our way to make something to pair with that and to also give back to Tooker House.”

Tooker House also features floor-to-ceiling whiteboards – many filled with elaborate math equations – in study spaces on each floor and two community studios known as makerspaces, where engineering students can work on projects, develop new technologies and use university-provided tools. Tooker House also offers students voice-activated technology courses and workshops, many of which are taught by Amazon Alexa experts.

“As an engineer, you learn to love working on projects and learning crazy new things and new ideas, and so with the technology that’s given to us, it opens the door to a bunch of new project ideas,” Hall said.

Hall and Kwon attribute their career advancement to the Amazon partnership with Tooker House.

“This was a big talking point during my interviews and meeting with potential employers. This shows that you can apply your knowledge,” Kwon said. “It’s one thing to get an A in your classes, but it’s another thing to take an idea from those classes and put it into a project of your own creation.”