Cindy McCain, a longtime advocate against human trafficking, said it’s long past time to update the Communications Decency Act, which she and other say gives cover to online sex trafficking. (Photo by Trevor Fay/Cronkite News) 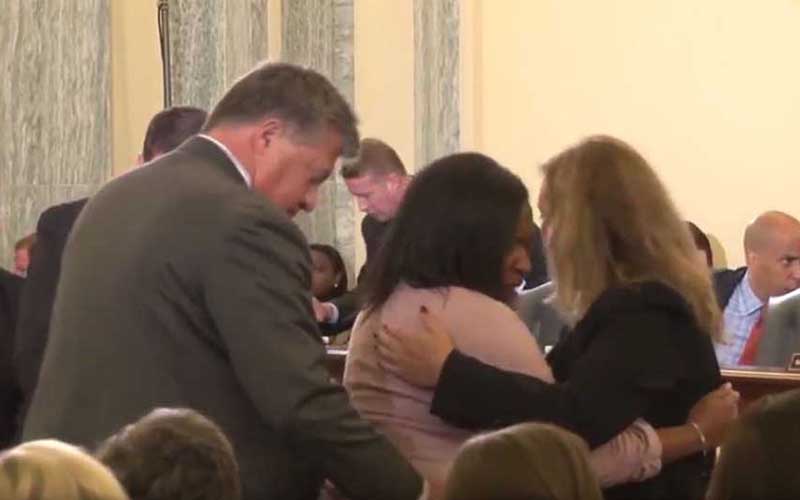 The hearing included emotional testimony from Yvonne Ambrose of Chicago, center, whose 16-year-old daughter was found murdered in a garage in December after being trafficked through an online ad. (Photo by Trevor Fay/Cronkite News)

WASHINGTON – When prosecutors tried to bring criminal charges against backpage.com in connection with alleged sex trafficking, a California judge dismissed the case last month saying the website enjoyed immunity under Section 230 of the Communications Decency Act.

For Cindy McCain and other advocates at a sometimes-emotional Senate hearing Tuesday, that is just more evidence that the law needs to be changed to fix a problem that they say allows online child sex trafficking.

“We saw the result of what happens to victim’s families as a result of Backpage and the inadequacy of present law, and it was presented … in a way that makes perfect sense and it should be changed,” McCain said after the Senate Commerce Committee hearing.

Section 230 “is old for its time … the internet has changed since. I look forward to seeing this issue continue in terms of strengthening other laws, more importantly protecting our victims of human trafficking,” she said.

But others at the hearing said the problem of online trafficking is too big to be solved by rephrasing one section of the law. And they worried that the Stop Enabling Sex Traffickers Act could actually backfire on anti-trafficking efforts, while infringing on free speech rights.

Eric Goldman, a law professor at Santa Clara University, said the act would push online services to rely too much on filters to catch traffickers using coded language on countless sites, shutting down unrelated legitimate speech in the process.

“Online services can’t magically find and eradicate only the online sex-trafficking promotions. SESTA doesn’t limit itself to bad actors; it applies to the entire internet” and would force services that moderate their sites to review all they content they receive, he said.

The bipartisan bill has 28 co-sponsors, including Arizona Republican Sens. John McCain and Jeff Flake. Proponents say the bill would allow courts to vigorously enforce federal and civil laws relating to online sex trafficking by adding language to prohibit the “sex trafficking of children” and “sex trafficking by force, threats of force, fraud and coercion.”

It would also amend the federal law that prohibits sex trafficking to include “knowing conduct by an individual or entity, by any means, that assists, supports, or facilitates” trafficking.

Tuesday’s hearing included testimony from Yvonne Ambrose of Chicago, whose 16-year-old daughter, Desiree Robinson, was found murdered in a garage in December after being trafficked through an ad on Backpage.com, Ambrose said.

“This is not a race, gender or economic problem – this is a people problem, a human problem,” a tearful Ambrose told the committee. “If there were stricter rules in place for postings on these websites, my child would still be alive with me today.”

Cindy McCain, a longtime advocate and co-chair of the McCain Institute’s Human Trafficking Advisory Council, said a revision of Section 230 is long overdue and it could help stop websites that host adult advertisements often used for trafficking.

In January, Backpage executives were called before another Senate committee investigating that the site enabled child sex trafficking, but they invoked their Fifth Amendment right not to testify. A subcommittee report claimed that Backpage deleted trafficking-related keywords in posts, such as “rape,” “Amber alert” and “Lolita.”

A call seeking comment from site officials Tuesday was not immediately returned.

But the executives have argued in the past that they are protected by the 1996 Communications Decency Act, a law that says online publishers cannot be held liable for third-party content published on their websites. And last month, a Sacramento judge agreed and dismissed trafficking charges, citing the legal immunity under Section 230.

California Attorney General Xavier Becerra defended SESTA Tuesday, testifying that websites acting in good faith should not worry about facing frivolous lawsuits because the bill will still leave broad exemptions to protect them.

“The broad exemption from any type of lawsuit for those who provide online services remains – it’s only if it’s sex trafficking,” Becerra said. “I’ve got to prove that it’s sex trafficking and that the defendants intended to violate that law. If we don’t have the tools, the only winners are those who go to the internet.”

But Goldman said the current law gives companies the freedom to voluntarily moderate content without holding them liable if harmful content slips through. The bill would set too high a bar, he said.

“SESTA would hold potentially liable any entity that can be said to benefit from its role in facilitating a sex trafficking violation, even if it has no knowledge that it is doing so or no practical way of terminating such assistance,” she testified.

“The proposed legislation does not address the underlying criminal behavior, and playing whack-a-mole with URLs and domains in civil courts is unlikely to stop bad actor websites that will simply move overseas and change their URLs to avoid being shut down,” she said.