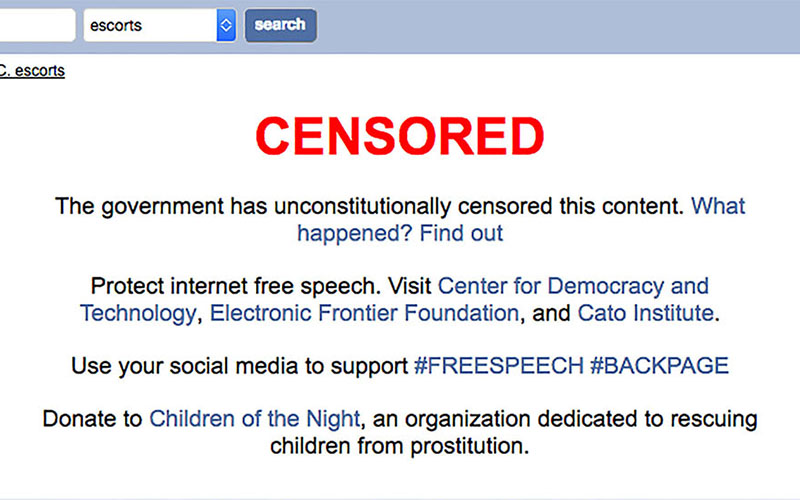 The online classified advertising site Backpage.com took down its ads for adult services in the U.S. Monday under pressure from Senate officials, what the site’s executives called the result of unconstitutional censorship by lawmakers. (Photo from Backpage.com)

The hearing came one day after the site – whose former owners Michael Lacey and James Larkin co-founded the Phoenix New Times – removed its “adult” ads pages in the U.S. because of what it called unconstitutional censorship.

A subcommittee report released Monday said National Center for Missing and Exploited Children data indicate that 73 percent of the child-trafficking reports it receives were related to Backpage, which the report calls the “leading online marketplace for commercial sex.”

“Backpage is a $600 million company built on selling sex, and importantly, selling sex with children,” said Sen. Claire McCaskill, D-Missouri, the ranking Democrat on the subcommittee.

But in a letter objecting to the forced appearance at the hearing by the executives, a lawyer for the site said, “Backpage and the people who work for the company agree that human trafficking is abhorrent and should be eradicated.” His letter said the site “has spent thousands of hours and millions of dollars” working with law enforcement to fight trafficking.

Site executives have said in the past that they were protected by the Communications Decency Act, a 1996 law regulating pornographic material on the internet. They argued that the law says internet publishers and service providers cannot be legally liable for content created by third parties.

But lawmakers, pointing to internal Backpage documents cited in the subcommittee report, said the executives lost that protection by alerting posters to key terms related to child sex trafficking and giving posters the ability to rephrase their posts. Flagged terms include “Lolita,” young, teenager, and even “Amber Alert.”

-One of the emails cited in the subcommittee report

“By Backpage’s own estimate, 70 to 80 percent of ads were edited by 2010,” said Portman, the subcommittee chairman. “These are not the practices of an ally in the fight against human trafficking.”

One mother, Nacole S. – none of the witnesses was identified by their full name – said her daughter was a high-achieving high school student who ran away before being turned to prostitution by an older woman at a teenage homeless shelter in Seattle.

Tearfully, she testified how her daughter was “raped, beaten, threatened and treated like a sexual object every day while posted in an ad on Backpage…. When we finally got her back, the young girl we found was not the (girl) we recognized.”

Sex trafficking is a priority of the McCain Institute for International Leadership, a D.C.-based think tank founded by Sen. John McCain, R-Arizona, whose wife, Cindy, is a prominent anti-human trafficking advocate who attended the hearing.

“I’m grateful for the hearing,” Cindy McCain said after the hearing. “We have solid research now that shows what Backpage was doing. This was child abuse at its worst, and it has to stop.”

She rejected suggestions by some that internet prostitution is safer than standing on street corners.

“We need to start with Backpage and start with amending the communications decency law, too, in a changing world that now includes digital,” McCain said.

A statement posed on the site Monday that closing the adult ads section of Backpage “will not reduce the problem of human trafficking, and those who suggest otherwise are deluding themselves and their constituencies.”

McCaskill used the hearing to tout the importance of government regulation on businesses gone awry noting that the subcommittee was able to force executives to appear – even if it could not make them testify.

“If this hearing stands for anything, it stands for the fact that congressional oversight matters,” she said.

While Lacey and Larkin did not testify, the site posted a statement from them Monday in which they vowed to keep fighting in court to protect the First Amendment against what they called “official bullying” by the government.

“Today, the censors have prevailed. We get it,” the statement said. “But the shut-down of Backpage’s adult classified advertising is an assault on the First Amendment. We maintain hope for a more robust and unbowed internet in the future.”