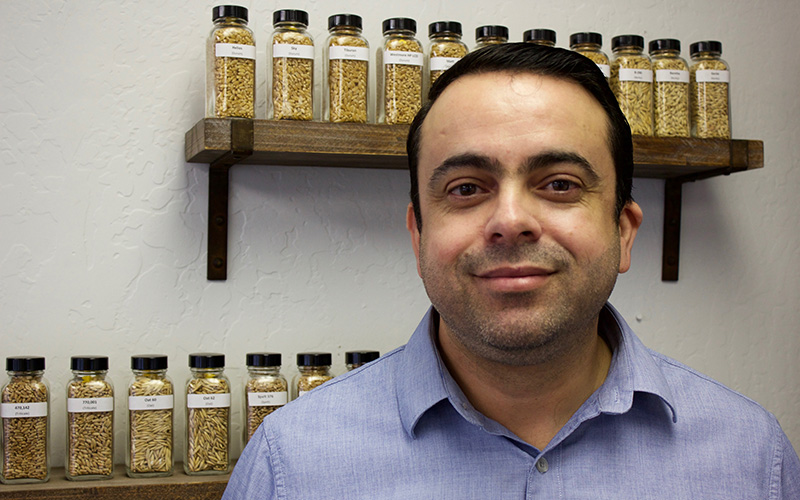 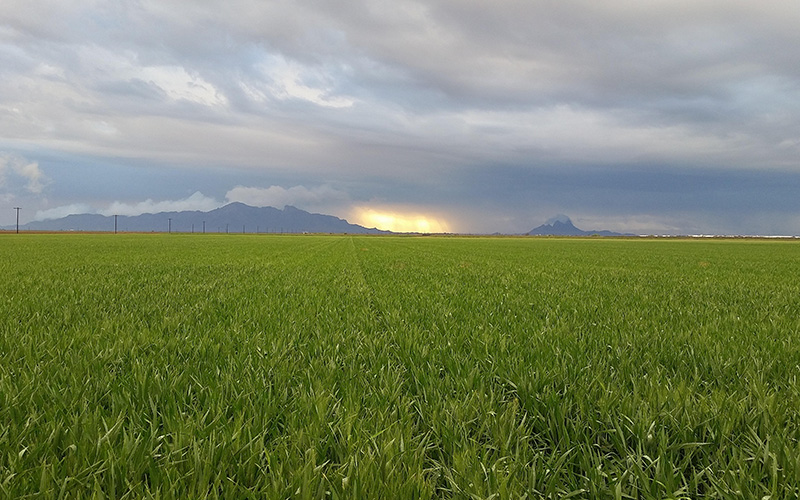 One of the wheat fields in Casa Grande. (Photo courtesy of Wesam AbuHammad)

“Most times, parents will have children that are genetically superior to them, and that is the same with wheat,” said Wesam AbuHammad, research director and lead durum wheat breeder at Arizona Plant Breeders Inc.

AbuHammad, born in Amman, Jordan, came to the U.S. in 2003 as a guest scientist at North Dakota State University. He earned a doctorate in plant breeding and genetics, spending years studying the state’s wheat production.

“There isn’t a whole lot of competition to be a plant geneticist for durum wheat,” AbuHammad laughed when asked why he chose the profession.

He joined Arizona Plant Breeders in 2014 and three years later, he and his team released a new line of desert durum into Arizona’s agriculture market. The line, known as Alberto, was named in honor of the company’s founder, Albert Carlton, who, according to AbuHammad, plans to retire this fall.

“We only breed excellent with excellent,” AbuHammad said. “If you don’t like something, you can eliminate it from the beginning.”

When breeding, geneticists weigh the needs of both local farmers and pasta makers, two parties who look for different qualities in the wheat.

Pasta makers look for yellow coloring as one of the most desirable traits alongside a high gluten index and high levels of protein. 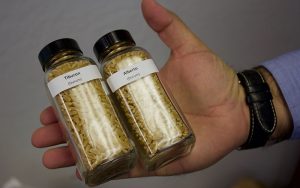 Tiburon was released by Arizona Plant Breeders in 2013, followed by this year’s release, Alberto. (Photo by Kianna Gardner/Cronkite News)

In 2016, the high-demand crop generated $131 million in sales in Arizona. According to Allan Simons, executive director of the Arizona Grain Research and Promotion Council, about 50 percent of the total market in Arizona goes to Italian buyers after it is ground into semolina by millers. The semolina is then mixed with other Italian semolina to boost the overall quality prior to pasta making.

“Very few pasta makers make it solely out desert durum,” Simons said. “If you did, it would be too chewy, but they like it especially for the color and other qualities like gluten strength.”

On the other hand, local farmers and millers expect high yields and early maturity to limit water use.

“I’m mainly interested in one thing: yield, yield, yield,” said Mark Hamilton, a farmer in Eloy who grows durum wheat and other crops.

Hamilton, who has planted durum varieties from Plant Breeders for nearly a decade, says his yields have increased steadily over the years from his nearly 500-acres worth of durum. This year he harvested nearly 7,000 pounds per acre.

Farmers who choose to plant the desert durum from Plant Breeders enter into a contract agreement to sell the harvested product back to Arizona Grain Inc., where it is then distributed to millers and turned into semolina, which is then sold to pasta makers. 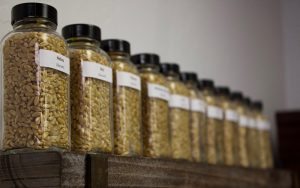 International interest takes major wheat handlers abroad, where they discuss the “interests and needs” of major buyers, Simons said. A group is going again this fall before the late fall-winter planting season to determine how much of which varieties are needed for the summer harvest.

“If an Italian buyer is interested in 10,000 pounds of x-y-z, we will make sure that we grow that and ship it over,” Simons said.

Alberto is the most recent variety in a long line of curated durum varieties dating back to the late 1980s. Released earlier this year, Alberto is the result of five years of careful seed breeding.

Before Alberto came Tiburon in 2013, and before Tiburon came Helios, Desert King and Kronos, among others, each one slightly different than the one bred before it. The main differences between Alberto and Tiburon are higher yields and lodging resistance, or the plant’s ability to stand strong, AbuHammad said.

“I’ve actually gotten to the point where I think of these seeds as my own kids,” AbuHammad said.

According to AbuHammad, desert durum takes specifically to drier climates where growth is spurred by irrigation systems instead of natural rainfall. Aside from Arizona, it grows in the San Joaquin Valley of California.

Creating a new line start-to-finish takes about 10-12 years because wheat is a long-harvest crop and multiple harvests are needed to successfully breed a new line. However, Plant Breeders utilizes an off-season nursery in California that allows them two harvests a year, cutting overall production time in half.

Breeding wheat in the desert by Kia Gardner

The new hybrid seeds are not the same as genetically modified organisms (GMOs) because the combining processes are different.

Genetically modified plants contain genes from other plants that would otherwise not be there if it weren’t for genetic engineering, whereas seed breeding produces a seed created by cross-pollinating two plants of the same type, eventually creating a new variety of that plant.

The next variety of desert durum from Plant Breeders is expected to be released around 2020.

“The line won’t stop at Alberto, of course,” AbuHammad said. “We are going to keep beating it every time.”

CORRECTION: This article was modified to reflect Wesam AbuHammad was a guest scientist at North Dakota State University.