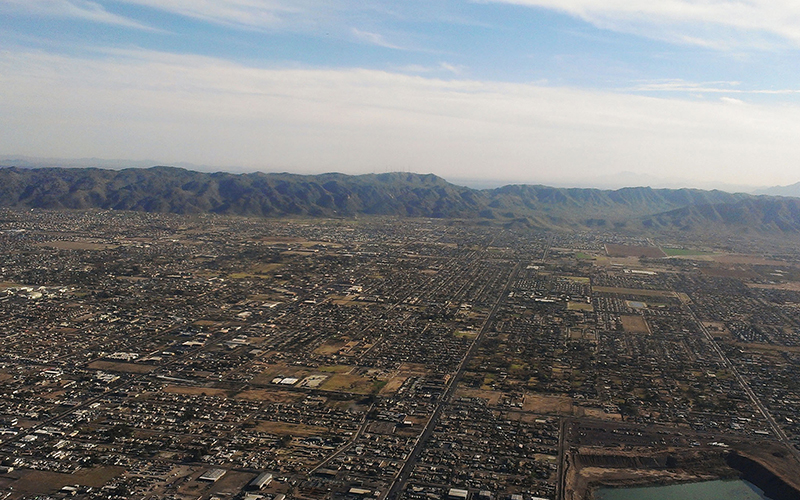 Wages in the Valley jumped 7.6 percent between July 2016 and July 2017, according to the U.S. Bureau of Labor Statistics. (Photo by Aimee Cash/Cronkite News)

From July 2016 to this July, hourly wages grew 7.6 percent, according to a release from the city of Phoenix using the latest labor numbers. The average hourly wage in Phoenix grew nearly $2 in the past year, from $24.87 to $26.75.

Phoenix area workers earned slightly more than the national average wage of $26.36. However, the Phoenix metro area’s population makes it the 12th-largest market, and the area falls below the average hourly wage of its Top 15 market peers, which is $28.94. Phoenix ranked 23rd overall in wages.

“We’ve been laser focused on building a more innovation-driven economy that works for everyone, and we’re seeing great results,” Stanton said in a statement released Thursday.

Eric Toll, a spokesman for Phoenix’s Community and Economic Development department, said Phoenix has tried to attract jobs in fields such as health care, technology, precision manufacturing and financial services.

Toll said in 2007, most of the Phoenix-area jobs were in fields such as retail or construction, which relied on consumers. That left businesses especially vulnerable in a recession.

But he said the market has changed, and the city now considers more jobs “high value” – jobs that pay more than $50,000, the average monthly household income in Maricopa County.

Jennifer Mellor, vice president of economic development at the Greater Phoenix Chamber of Commerce, said the wage increase could have long-term benefits.

“The increase in our average salary is a strong indicator that high-wage type people are coming to the region or people are working their way up in the region, which is only going to continue to incentivize companies to decide to either stay here or relocate here,” Mellor said.

“Having a more diverse economy that’s more reliant on more types of positions is going to benefit us long term,” Mellor said.

Mellor said that in the event of a recession, this diversity would put Phoenix’s economy in a “much better place to stabilize” because it won’t rely on one specific industry or growth.

Entry-level positions also saw a wage increase last year when Arizona passed Proposition 206, raising minimum wage from $8.05 to $10. Toll said the higher minimum wage may play a role in the overall wage increase, but he credited the increase in higher-level jobs as a larger reason because these higher jobs have higher averages of pay.

“For every highly skilled job, it creates two or three entry level type positions, and those are vitally important to our economy as well,” Mellor said.