A few volunteers take a break from the heat, sitting in the shade happily chatting.

More than 60 volunteers are paying tribute to the lives lost in Sept. 11 by giving back. 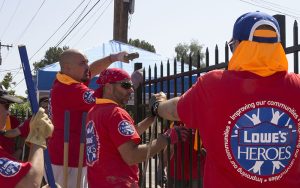 Lowe’s volunteers build a gate for the Keep Phoenix Beautiful office. The nonprofit also will offer meeting space to neighborhood groups and other nonprofit organizations. (Photo by Alyssa Williams/Cronkite News)

They were building a house, known as Pierson Street, where neighborhood groups and nonprofit organizations can meet in the new office space for Keep Phoenix Beautiful.

The organization hosted a day of service to honor the lives of those lost 16 years ago. Nearly 3,000 people died on Sept. 11, 2001, in the terrorist attack that toppled the World Trade Center in New York.

Military veterans and managers for Lowe’s, a home-improvement chain that helped finance the construction, worked together to dig in the dirt, build a gate and pick up trash. 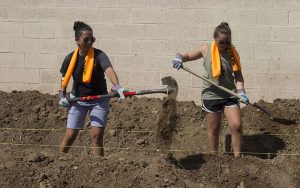 Volunteers from Arizona State University joined dozens of volunteers who dug trenches, built a gate and cleaned up in a day of service on the 9/11 anniversary. (Photo by Alyssa Williams/Cronkite News)

“I think it’s fantastic seeing all these people come together and develop this piece of property,” said Navy veteran Paul Jenkins. “It’s sensational.”

Another volunteer said he was grateful to contribute.

“I think for us personally it was just a way for us to definitely reach out and be a part of our community,” said volunteer Joe Davis of Lowe’s. “For us to show on a day service like this to remember those that were lost on that day really touches home for us.”