SCOTTSDALE – Arizona is in the middle of rattlesnake birthing season, leading to an increased risk of snakebites, according to poison control experts.

“We have about 300 rattlesnake bites every year. We are right on track right now,” said Maureen Roland, a registered nurse for Banner Poison and Drug Information Center.

Some slither in glass cages at the Phoenix Herpetological Society, which handles about 500 snakes rescued from homes, turned in by local shelters or seized by animal control.

Arizona has about 30 types of non-venomous snakes and 15 types of rattlesnakes, said Daniel Marchand, executive curator for the Herpetological Society. A rattlesnake bite can lead to hemorrhaging or even death. 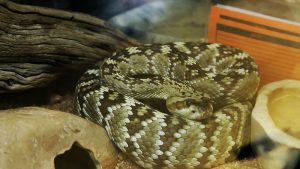 This black-tailed rattlesnake, housed at the Phoenix Herpetological Society in Scottsdale, is venemous and can be found throughout most of Arizona. (Photo by Chelsea Shannon/Cronkite News)

“This is the time of year we get calls for baby rattlesnakes,” he said. “We go to a resident’s home and we may find anywhere from one to 20 depending on how recently the mom has given birth.”

August and September are the prime months for rattlesnake births, Roland said.

“The tail of a rattlesnake is relatively thick at the end and rattles at the end of the tail,” Marchand said “A non-venomous snake has a very long and very thin, pointed tail. You don’t have to see much of the snake to know if it’s dangerous or not really.”

The best way to prevent a snake bite is to stay alert and understand they won’t bother people who don’t bother them.

“Make sure you are staying three feet back from any rattlesnake so you are out of their strike range,” said Joe Hymes, volunteer manager for the herpetological group, which offers summer camps, education programs and accepts snakes people drop off at the facility.

“The great thing about snakes is they are down on the ground, they don’t have legs,” Hymes said. “If you’re not putting yourself in their reach, they are not going to bite you or hurt you in any way.”